Schenectady County elections officials on Tuesday announced that “due to anticipated high turnout” they would extend the weekend’s early voting hours by one extra hour both Saturday and Sunday — early voting sites in the county will now be open 9 a.m. to 3 p.m. both of those days.

Already over 20 percent of Schenectady County’s roughly 100,000 registered voters have cast an early or absentee ballot, according to data provided Tuesday by the county board of elections. By noon Tuesday, the county had tallied its 11,000th early vote.

Counties across the Capital Region reported more voters showing up to the polls on Monday than either Saturday or Sunday, when many early voting sites were open somewhat shorter hours, a pattern that held across the state as well. By the close of polls Tuesday night, nearly 40,000 voters in seven Capital Region counties had cast an early vote. 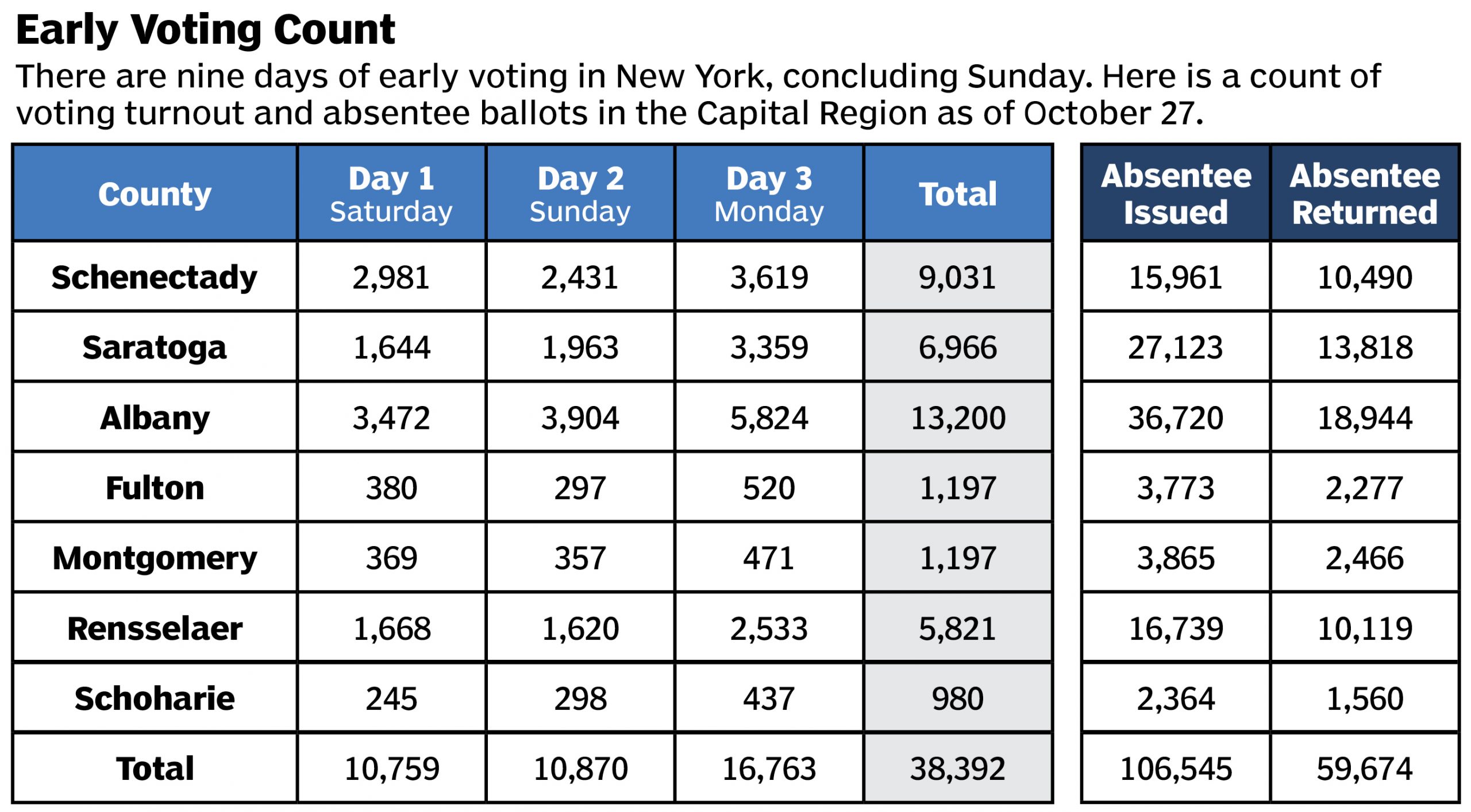 “It was like Election Day,” said Schenectady County Elections Commissioner Darlene Harris, who celebrated her birthday with an over 12-hour day overseeing the polls Monday. “The level of fervor, the stuff going on, the phones were hot, the emails were exploding … it was like Election Day.”

Over 3,500 Schenectady County voters turned out to one of the county’s four early voting locations on Monday – up from less than 3,000 voters on both Saturday and Sunday. Harris and Amy Hild, the county’s other elections commissioner, said voters have been cooperative and lines have moved smoothly. They said wait times have lasted around 20 minutes for many voters and that lines are moving faster than they may appear at first glance.

Schenectady County’s voter participation rate counting just the early votes so far places it ahead of most other counties in the state. The ballots cast over the first three days of early voting represent about 9 percent of eligible voters in the county. By comparison, less than 6 percent of registered voters statewide had participated in early voting after polls closed Monday night. Only Staten Island – Richmond County – reported a higher rate of participation in the state, according to county-level participation numbers from the state Board of Elections.

Hild and Harris said early voting was giving voters more flexibility in casting their ballots this election and hoped that it would ease the waits at Election Day polling sites.

“It’s really offering better accessibility to each voter and will lessen the strain on Election Day, so the lines won’t be as long,” Hild said. “I think it will be an even better Election Day than it would have been.”