The Capital Region will be electing as least two new state senators on Tuesday, in the 46th Senate District seat now held by Sen. George Amedore and in the 51st District, held by Sen. James Seward.

But in Senate races across the area, voters face clear choices in terms of the political philosophies candidates are offering. 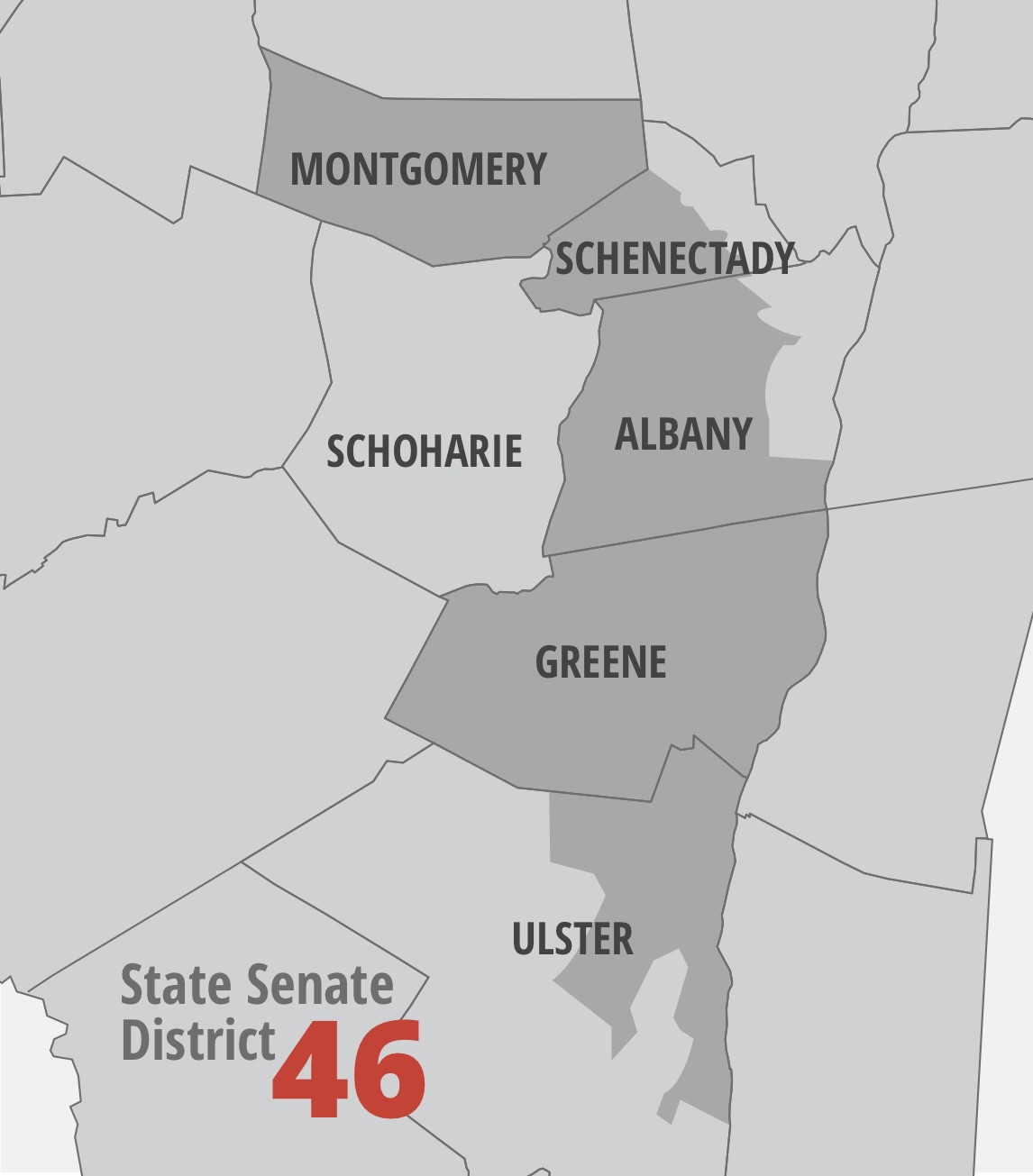 With Amedore, a Republican from Rotterdam, not seeking re-election, the race in the 46th Senate District has become one to watch. The district, which stretches eel-like from Montgomery County to Kingston, has shifted more Democratic in the past decade.

Michelle Hinchey, daughter of the late Democratic Congressman Maurice Hinchey of Saugerties, is vying for the seat in her first bid for public office, opposed by Republican/Conservative Richard M. Amedure of Rensselaerville, a retired state trooper and distant relation of Amedore’s. Also on the ballot is Green Party candidate Robert D. Alft Jr. of Voorheesville.

Democrats think they have an excellent shot at flipping the district Democratic because Hinchey has name recognition. The 32-year-old has worked in communications since college. She says she learned a lot from her father, who was in Congress the entire time she was growing up.

Hinchey launched her campaign last year hoping to unseat Amedore, who a few months later joined what became a long list of Republican state senators who decided to retire after Democrats took control of the chamber in 2019.

Amedure, 56, was a 31-year state trooper and has also served on the town Planning Board in Rensselaerville, in southern Albany County.

Amedure is emphasizing his knowledge of local issues through his service on the board, which he chaired for five years.

He says the Republican Party needs to regain control of the Senate, which — with a brief exception a decade ago — the GOP controlled for decades. Currently, leaders in both chambers of the Legislature, as well as Gov. Andrew Cuomo, are from the greater New York City area.

Also actively campaigning is a write-in candidate is child victims’ rights advocate Gary Greenberg of New Baltimore. He launched a write-in campaign after a court invalidated his efforts to force a Democratic primary with Hinchey, after Hinchey supporters objected. His ideas for how the state can raise revenue during the pandemic include selling the three unused New York City-area casino licenses and legalizing marijuana sales.

The 46th Senate District includes Montgomery County and the southern part of Schenectady County, and the Albany Hill Towns, as well as large parts of Greene and Ulster counties. It has an enrollment of 75,573 registered Democrats and 56,734 registered Republicans.

In both the 49th and 43rd districts, meanwhile, mainstream Republican incumbents face challengers from the progressive wing of the Democratic party. 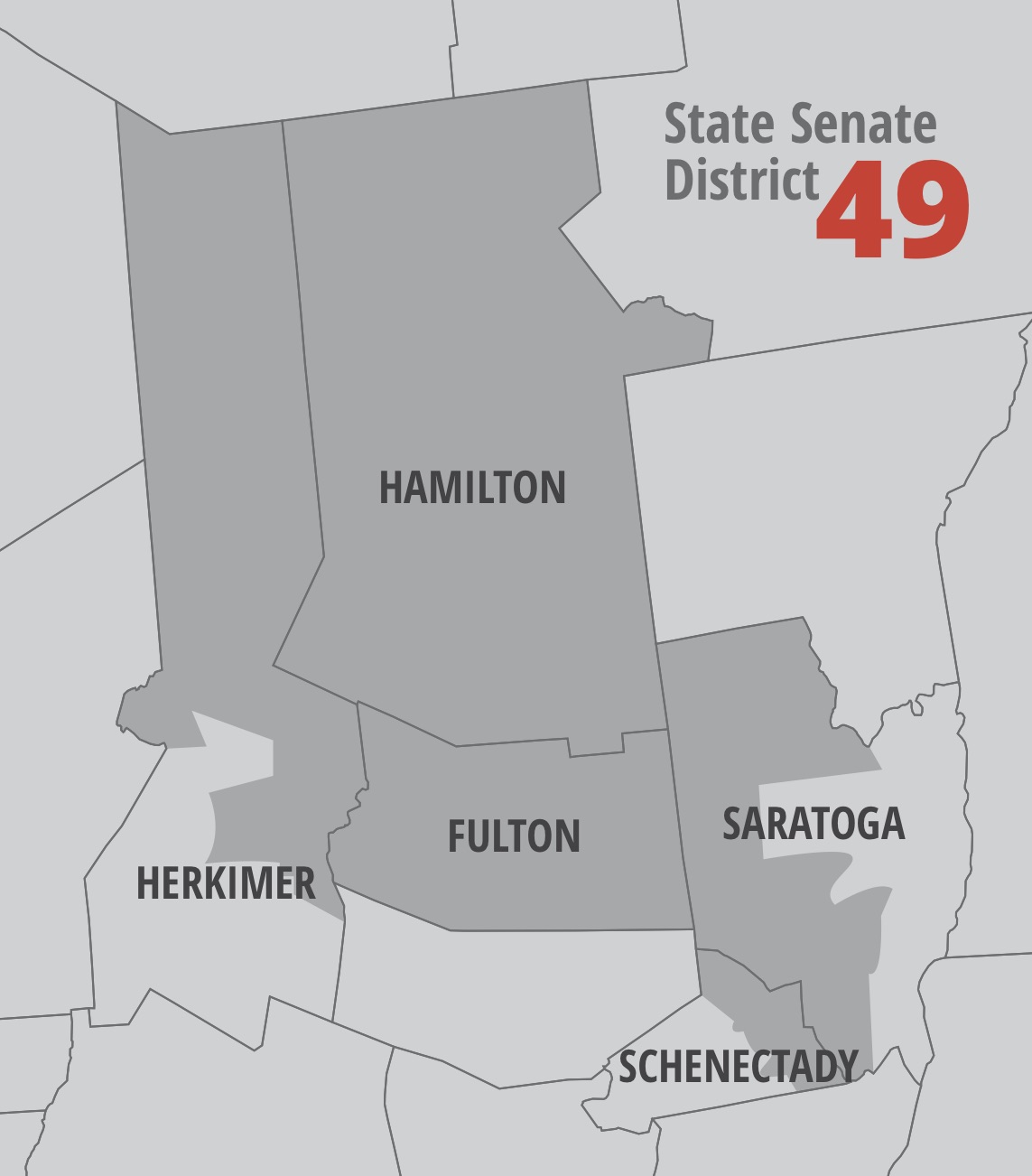 The race has Sen. James Tedisco of Glenville – a state senator for only two terms, but a political figure in the Capital Region as a state assemblyman for decades – facing Thearse McCalmon of Schenectady, who has never held public office but who in 2019 ran what many considered a surprisingly strong Democratic primary challenge to Schenectady Mayor Gary R. McCarthy.

Tedisco, who was Republican minority leader during part of his 32-year Assembly career, is frequently critical of the state’s Democratic leaders. He has taken up conservative causes such as the campaign against driver’s licenses for undocumented immigrants, sponsored stronger laws against animal cruelty, and promoted the cause of missing persons and their families.

Most recently, Tedisco has raised his profile by calling for a bipartisan commission to look into why so many of the state’s nursing home residents died last spring in the early stages of the pandemic, but an investigation into nursing home deaths is an idea Cuomo has rejected.

McCalmon says she is campaigning against the whole idea of people like Tedisco being career politicians.

“We are at a crossroad in New York,” she says on her campaign website. “People are leaving the state due to career politicians selling out on us – unaffordable health care and housing, wages not keeping up with the standard of living, and our infrastructure crumbling around us.”

The 49th Senate District includes parts of Saratoga, Schenectady and Herkimer counties, and all of Fulton and Hamilton counties.

The district has been represented by a Republican for many decades and voter enrollment leans Republican. Expectations for the district show in each candidate’s fundraising totals: Tedisco had $144,317 in his campaign account as of Oct. 14, while McCalmon had just $5,578. 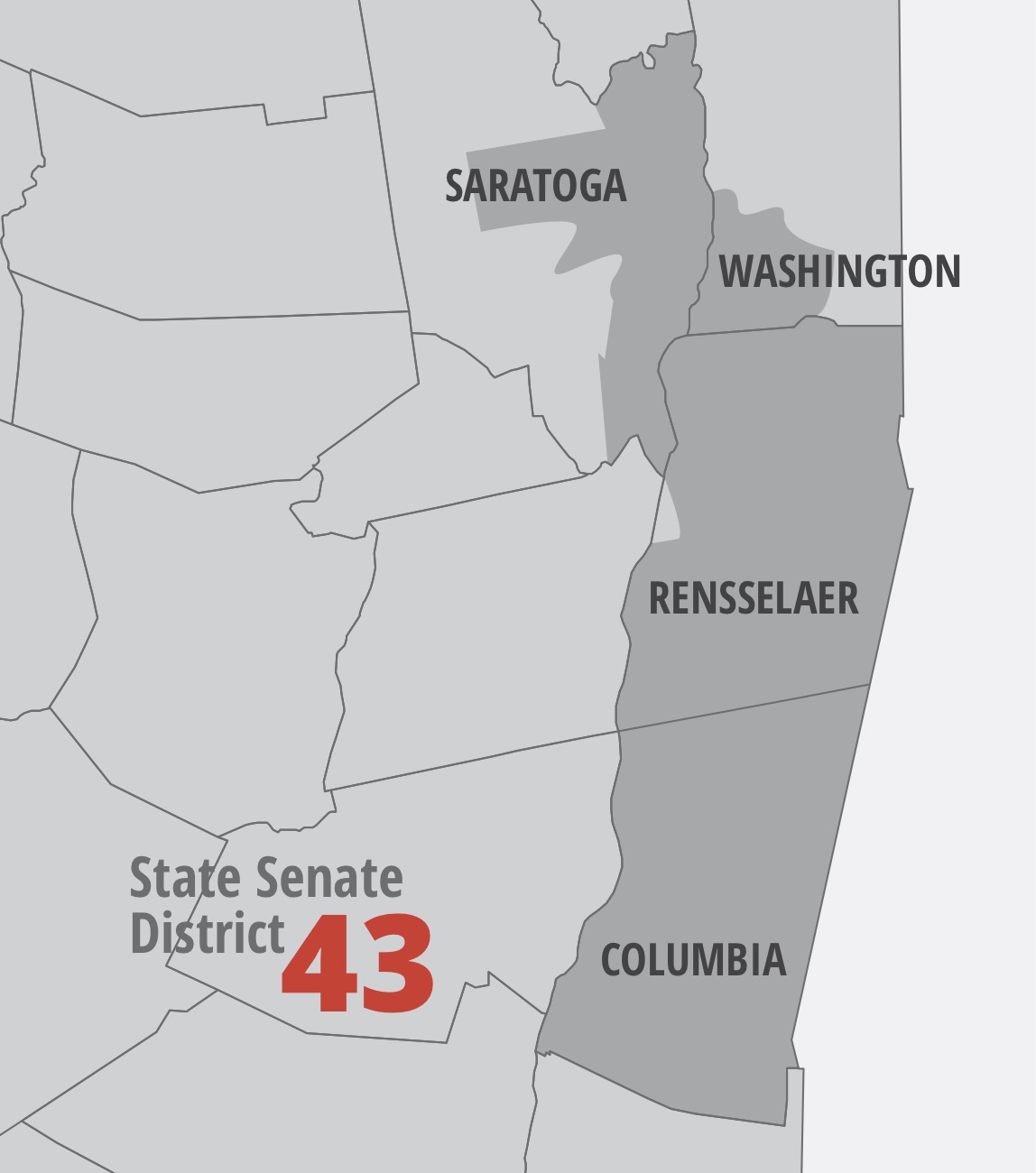 The 43rd District – in eastern Saratoga County, rural Rensselaer County and all of Columbia County — has close to an even split in voter enrollments. But the seat has long been held by Republicans: most recently Daphne Jordan of Halfmoon, who is completing her freshman term.

Jordan is being challenged by Patrick F. Nelson, a Stillwater village trustee who has worked for politically progressive candidates, including Vermont U.S. Sen. Bernie Sanders, the standard-bearer for the party’s progressive wing in this year’s presidential campaign season.

Jordan, although she has served just two years in the Senate, was chief of staff to the district’s previous senator, Kathy Marchione. She is also a small business owner and former member of the Halfmoon Town Board. 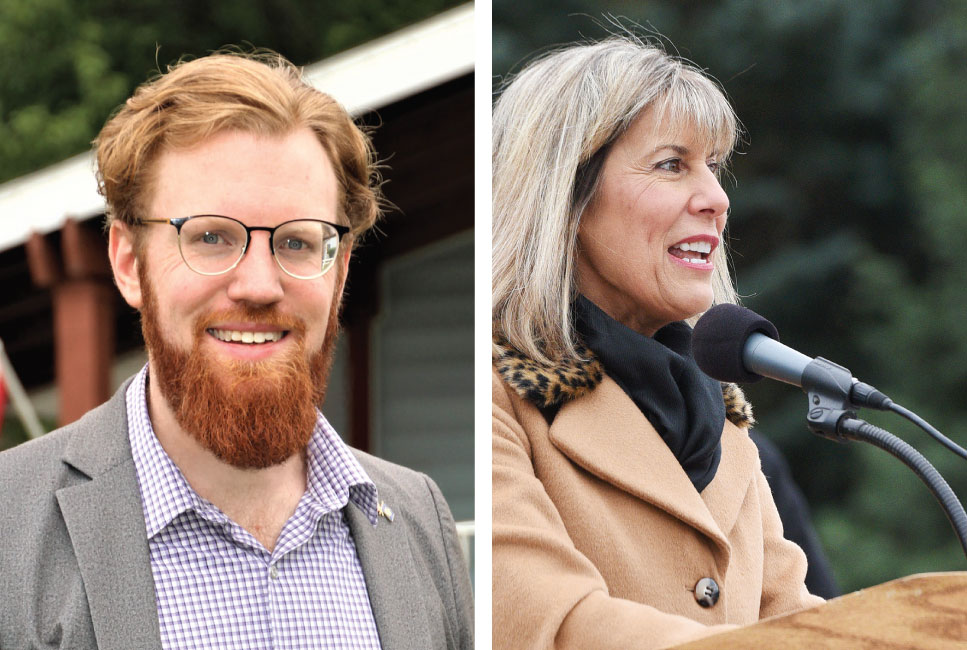 Jordan, like Tedisco, has criticized the state’s handling of the COVID pandemic, especially in nursing homes. She espouses a mainstream-Republican smaller government, lower-tax philosophy, and more recently has emphasized her support for law enforcement.

The district has 69,095 registered Democrats and 68,313 registered Republicans, according to state Board of Elections statistics. 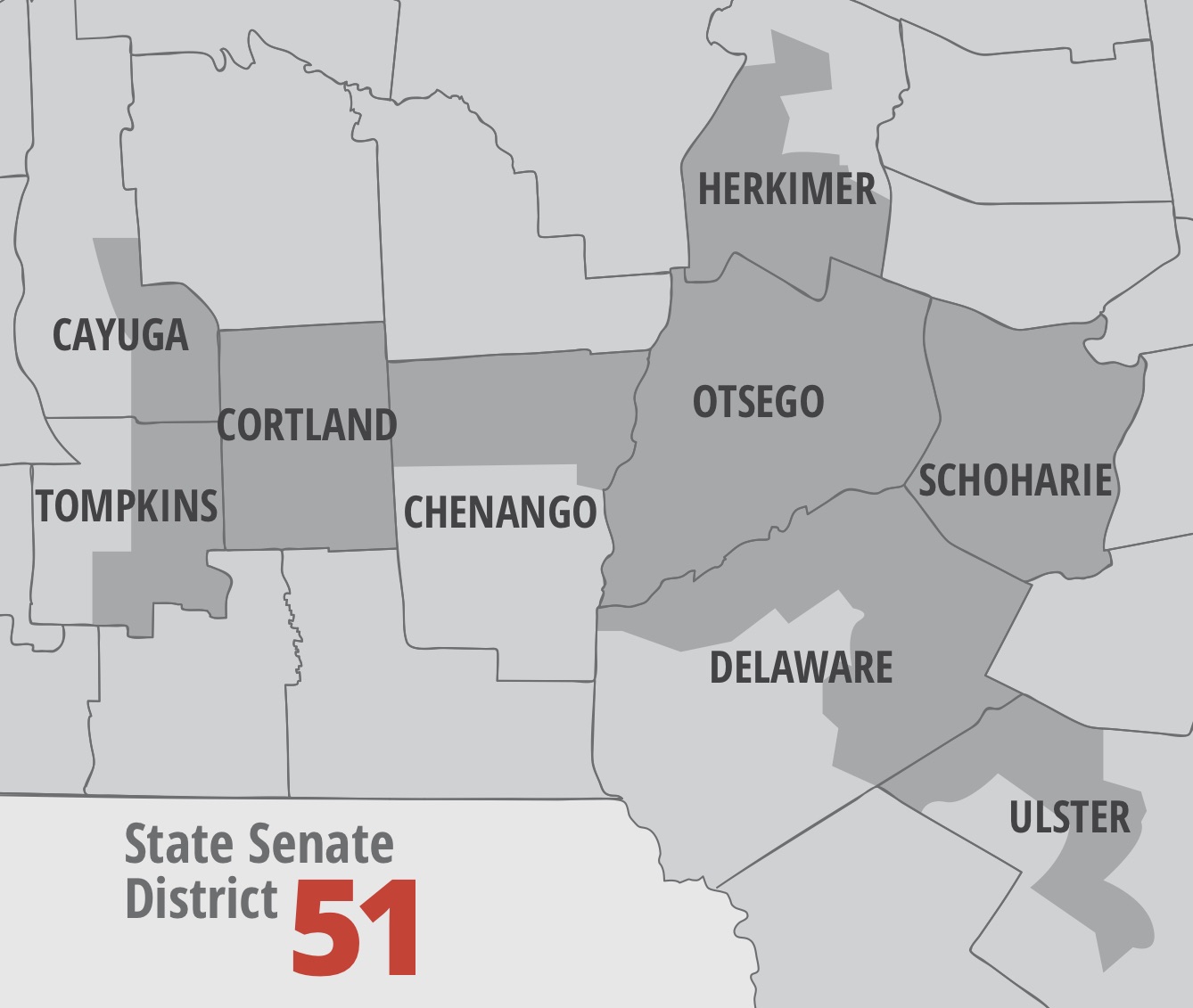 A new senator is going to be elected to represent the 51st Senate District, which has its eastern end in Schoharie County and stretches to central New York. Seward, R-Milford, is retiring this year after a long career in state politics.

The candidates to replace Seward are Republican business owner Peter Oberacker of Schenevus, who is a member of the Otsego County Legislature, and Democrat Jim Barber of Middleburgh, who comes from one of the Schoharie Valley’s most prominent farming families.

Oberacker grew up in Schenevus, working in a family sausage business, and went on to graduate from SUNY Delhi and work in food product research, development and implementation. He created a company called Form Tech Solutions in 2007, and moved its international headquarters from Texas to Schenevus in 2017. Oberacker wants to see the state support small businesses during the pandemic, repeal the state bail reform measures that were enacted in 2019 and eliminated cash bail for many criminal suspects, and support farmers. Like nearly every candidate running to represent a rural area this election cycle, he wants to see expansion of broadband internet access.

Barber is a fifth-generation farmer in the Schoharie Valley and a former special assistant to the state commissioner of Agriculture and Markets, and executive director of the Farm Service Agency.

“I know the good work that government can and should do to protect and serve every segment of our community, a government that protects our natural resources, respects personal choice and supports our farms and businesses,” he said.

The 51st District has 69,067 registered Republicans and 58,726 registered Democrats. In Albany County, meanwhile, veteran Sen. Neil D. Breslin, D-Albany, has been in the state Senate since 1997, and is being opposed by Republican David R. Yule of Albany, a certified public accountant who has not actively campaigned.

Breslin, 78, was in the Senate minority for more than 20 years, but was named chairman of the Insurance Committee after Democrats took control of the chamber in 2019.