Some political campaigns are fast-paced horse races. In others, the winning candidate barely has to break a sweat, but at least has to make it to the finish line.

Among the eight state Assemby races at stake this year across the Capital Region, look for a little of both. A couple of incumbents are facing challenging opponents and no Assembly candidate is running without opposition.

At least one new Assembly member will be elected, in the 114th Assembly District in Warren and northern Saratoga counties, and in others, at least one person is hoping to take down an incumbent and become a new face at the Capitol. 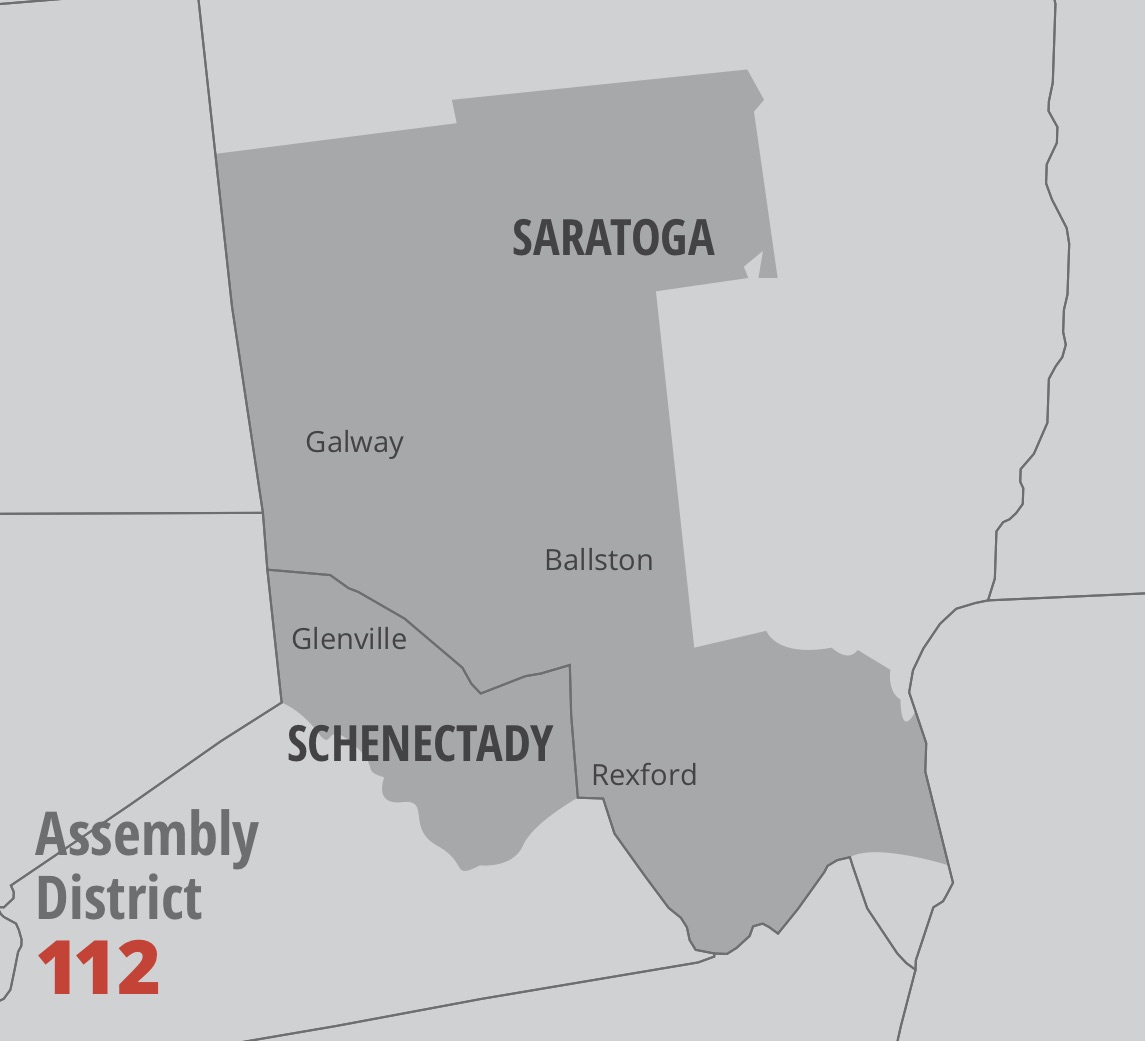 Seeman, who has been a local political activist for decades, has raised nearly $125,000 through the 2020 election cycle – more than tenfold what Walsh’s 2016 opponent raised – even though he has refused to take corporate political action committee donations. (Walsh was unopposed in 2018.) Seeman has been endorsed by some labor unions and also environmental organizations, including the Sierra Club.

Walsh, a lawyer and former Ballston Town Board member who was first elected to the Assembly in 2016, has raised less money than Seeman, but nevertheless headed into the final days of the campaign with $45,000 in the bank, compared with $47,805 for Seeman.

Seeman has a strongly progressive platform calling for higher taxes on the wealthy and working toward universal health care access, while Walsh has stuck to a traditionally Republican pro-business message, and opposition to many of the social and criminal justice reform policies pushed by Democrats in Albany. 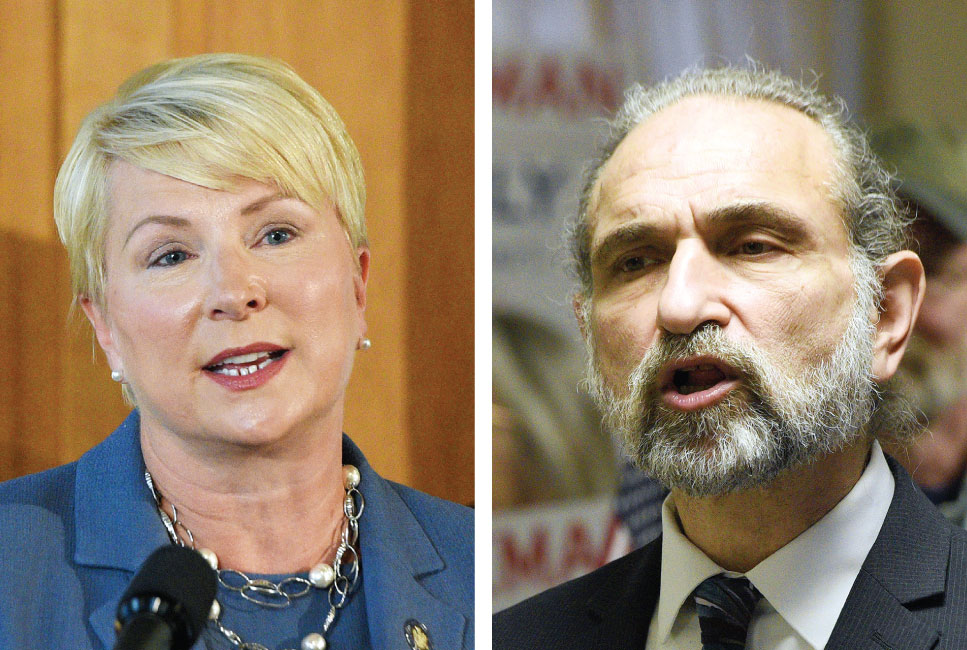 Walsh, the mother of a young adult with autism, has sponsored legislation to support families of children with disabilities, She has also said more Republican voices are needed in Albany, with all chambers of state government now led by Democrats.

“During these last four years I’ve seen a profound change in our Legislature, a lack of balance, reason and moderation,” Walsh said at a recent League of Women Voters forum. “In 2018, the previously Republican Senate flipped to Democrats. … Where there used to be compromise and consensus-building across the aisle, that’s now no longer considered necessary by the party in power. The practical result is a shift to the left.”

At the same mid-October online forum, Seeman noted that he is a retired civil servant and union member, has walked picket lines in support of workers and progressive causes, and has consistently fought against the corporate interests he sees as controlling much of government.

“I’ve fought for our health care and front-line workers. I’ve walked the picket lines. I’ve stood up to protect our sacred environment,” Seeman said. “I’ve stood up to billionaire corporations and political corruption, and for real democracy, which means representing our Main Streets, not Wall Street.”

As far as his chances of winning, party enrollment numbers work against Seeman, since the 112th District has more than 38,000 registered Republican voters to just over 30,000 Democrats. 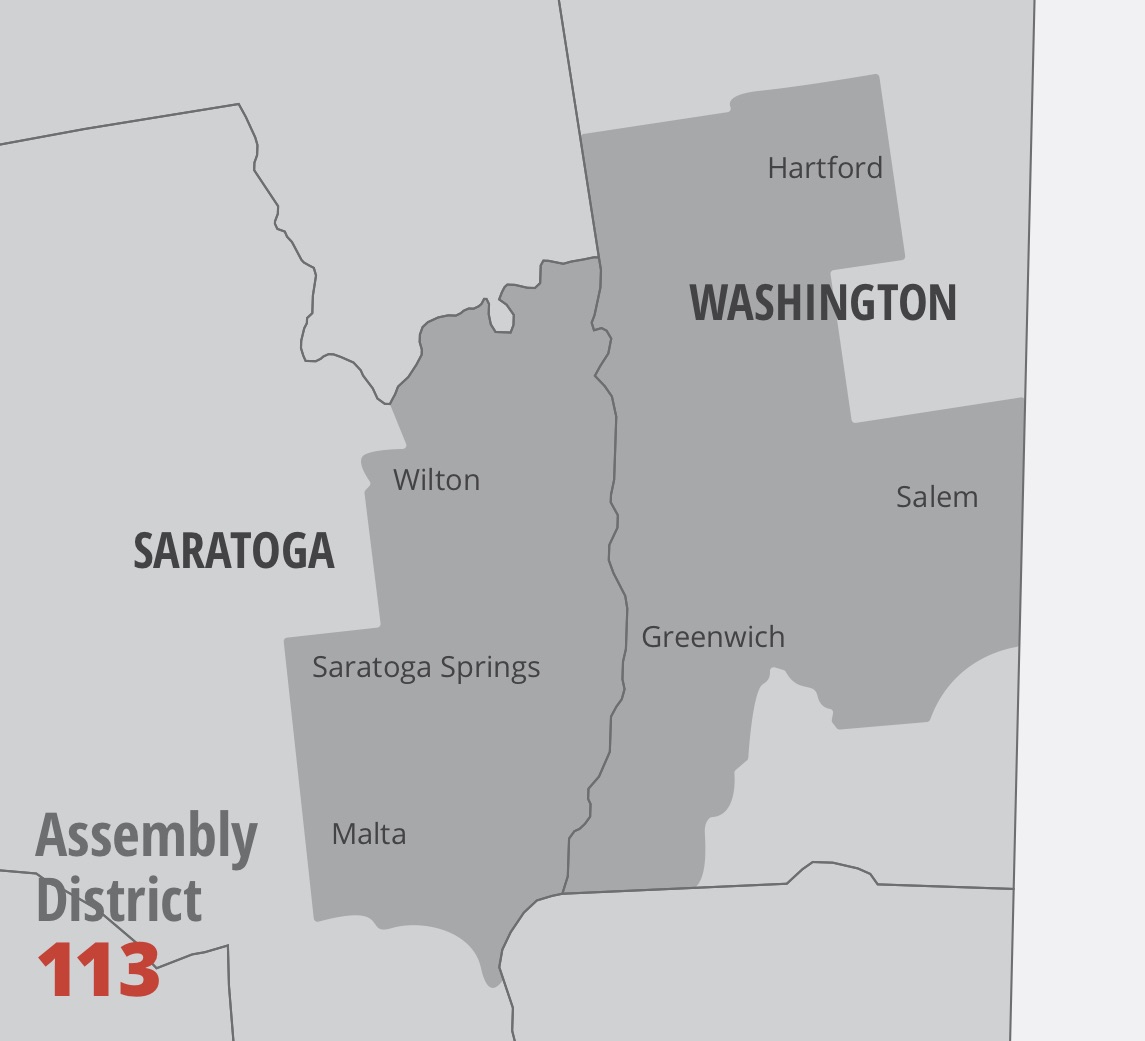 The race to represent a district that includes Washington County and eastern Saratoga County is between three-term Democratic incumbent Carrie Woerner of Round Lake and Republican-Conservative David M. Catalfamo. The contest is tight enough that both major parties are putting money into the race through their Assembly campaign committees.

Catalfamo, who lives in Wilton, is a former aide to Gov. George Pataki and has worked in public and private economic development roles over the past 20 years. He has attacked Woerner as too close to the Assembly’s New York City-focused Democratic leadership – something Woerner has emphatically denied, noting her opposition to the 2019 bail reform measures that critics say have allowed more criminal suspects to be released without bail. Bail reform is highly unpopular upstate.

At an October virtual forum, Woerner said she’s been focused since the pandemic arrived in March on the challenges it has created for people in her district: keeping essential businesses open and operating; making sure that the newly unemployed were able to get through the state unemployment insurance system and secure payments; and pushing to reopen businesses, schools and Saratoga Race Course. 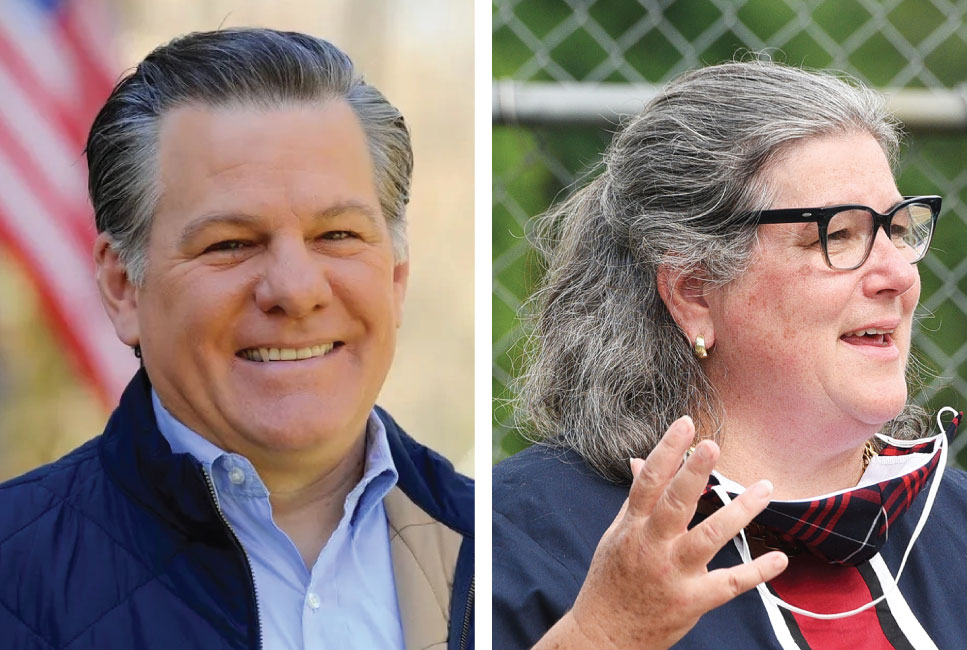 “I’m running for Assembly because upstate matters, Saratoga and Washington counties matter,” Catalfamo said, noting his previous economic development experience, including heading up a state business recovery program set up by Pataki after the 9/11 terrorist attacks.

“When the shutdown weekend came along, I decided at that moment that it was a good time to put their experience, put that knowledge to work for the people of our area, and that is what got me into the race,” he said.

By party enrollment numbers, Catalfamo should be favored, but Woerner has handily won each year since her first election in 2014. The district has 35,756 registered Republicans and 29,099 registered Democrats.

It’s guaranteed that there will be a new Assembly member from the district: Either Republican Horicon town Supervisor Matthew J. Simpson, Democrat Claudia Braymer, or – a long shot – former Athol supervisor Evelyn M. Wood, who is on the Serve American Movement ballot line. The three candidates want to replace Assemblyman Dan Stec of Queensbury, who is running for the state Senate seat opened by Sen. Betty Little’s retirement.

Braymer, of Glens Falls, is a lawyer, mother and member of the Warren County Board of Supervisors, who said her varied experiences will make her a good legislator. “In Albany I will serve us with independence, integrity and tenacity,” she said. 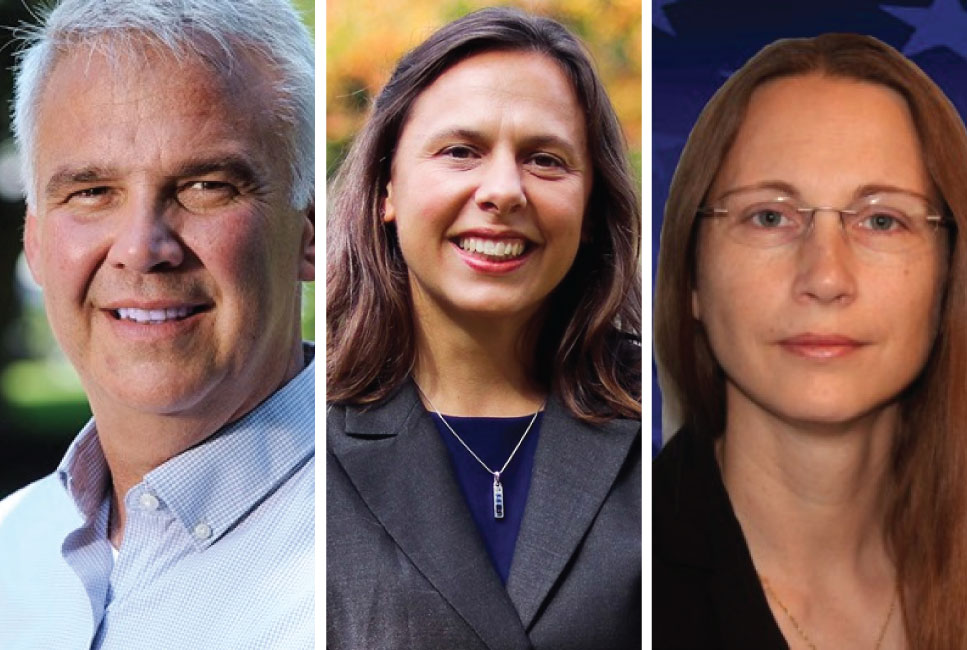 Simpson, a former small business owner, has been a town supervisor for seven years and is president of the Adirondack Association of Towns and Villages, which represents Adirondack communities on issues facing state government. “I’m deeply concerned about the future prospects of my neighbors and their families,” he said, citing high costs of living in New York, lack of broadband and lack of job prospects for young people. “I want to bring back common sense and sound financial practices to governing,” he said. 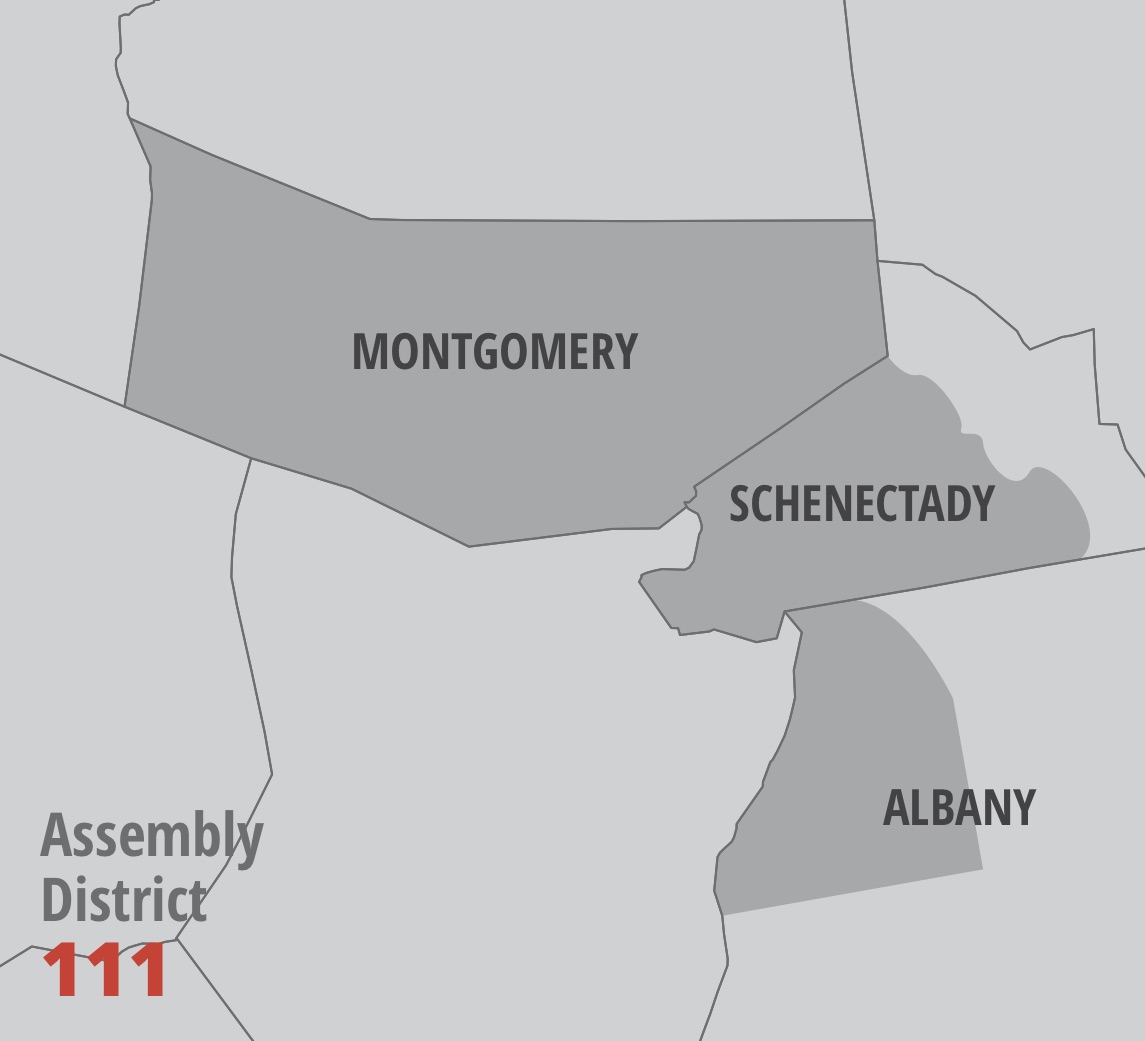 In the 111th Assembly District, Democratic Assemblyman Angelo L. Santabarbara of Rotterdam is campaigning for a fifth two-year term representing a district in Montgomery County and southern/western Schenectady County. He is facing Republican Paul E. DeLorenzo, an attorney in Schenectady.

Santabarbara, who has a young adult son with autism, is best known for his efforts to achieve more state-level recognition of the needs of people with autism and their families. An engineer by training, he has advocated for public infrastructure improvement projects. As Assembly chair of the Legislative Commission on Rural Resources, he also has a strong interest in expanding access to broadband and cellphone coverage. 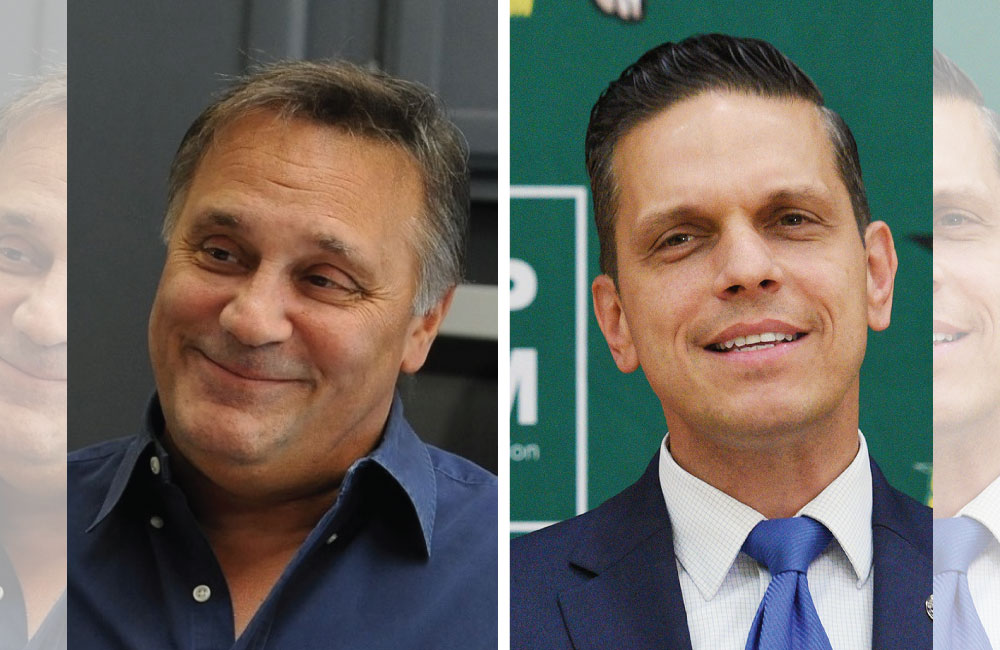 Although Santabarbara has the Conservative Party ballot line as a Democrat, DeLorenzo calls himself the only “true conservative” in the race, and has popular conservative positions such as the repeal of the bail reform law and support for law enforcement. 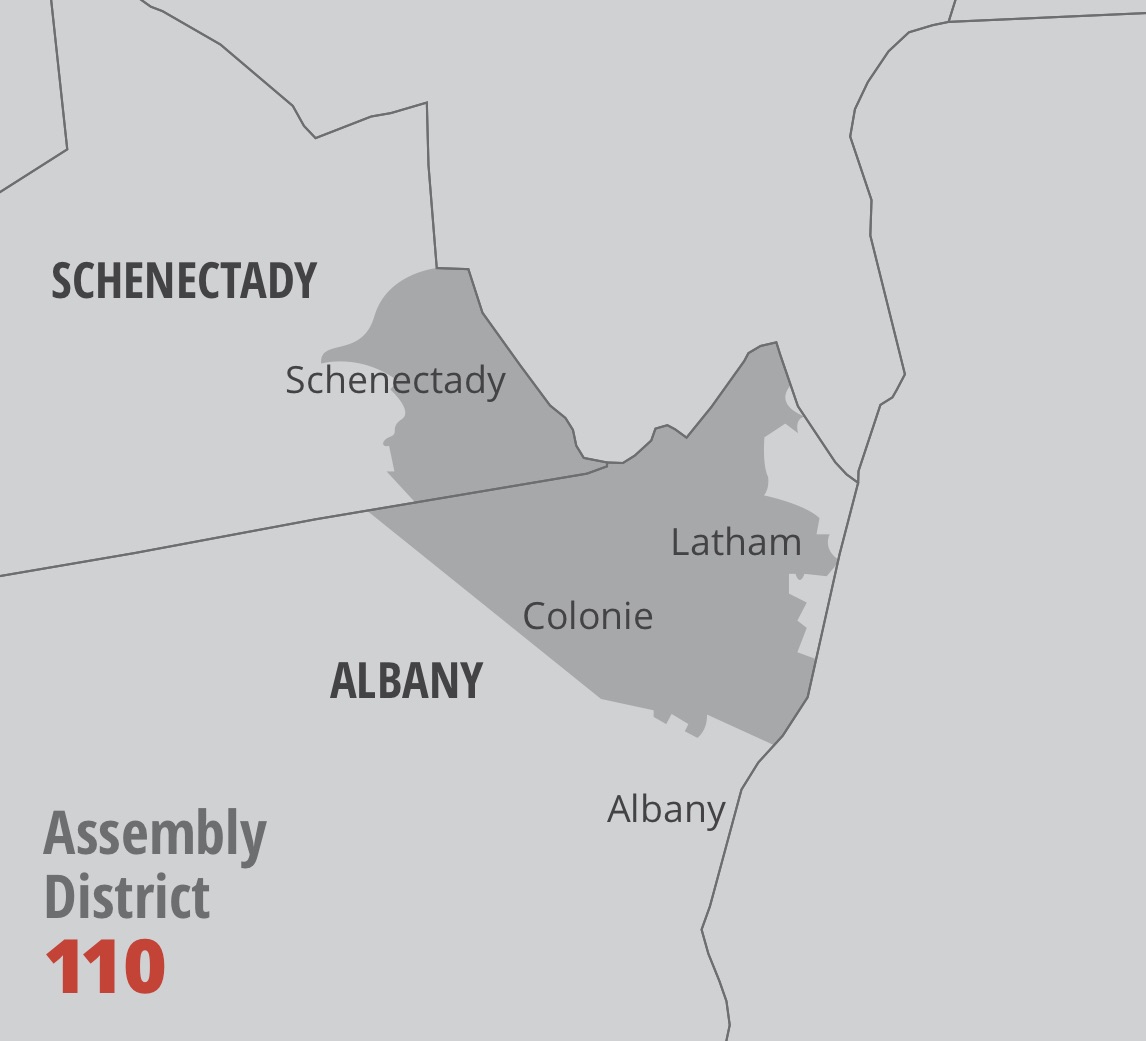 Incumbent Democrat Phillip G. Steck of Colonie, an attorney who is generally progressive and has called for reimposition of a corporate stock transfer tax to raise new revenue for the state, is running for a fifth two-year term against Republican-Conservative Dave M. Feiden, whose family owns Earl B. Feiden Appliances, which was started by his grandfather. 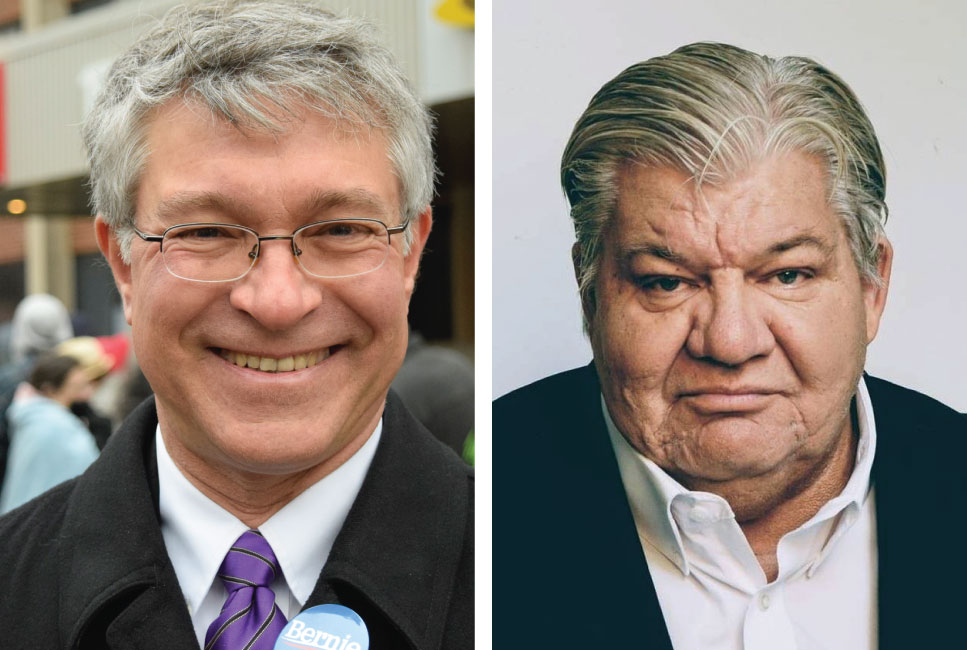 “Why is it so difficult for other businesses to stay and prosper in NY? It’s the taxes, fees and regulations imposed on them,” according to Feiden’s website. “I want to change that and make it easier to survive and flourish.”

Steck is a longtime advocate for gun control and women’s reproductive rights, and he supports a Medicare-for-all universal health care program, which he believes can be more efficient than Medicaid and Medicare.

The district, which includes Colonie, Niskayuna and the northern and eastern parts of the city of Schenectady, is heavily Democratic by voter enrollment, with nearly 39,000 Democrats and 23,000 Republicans. 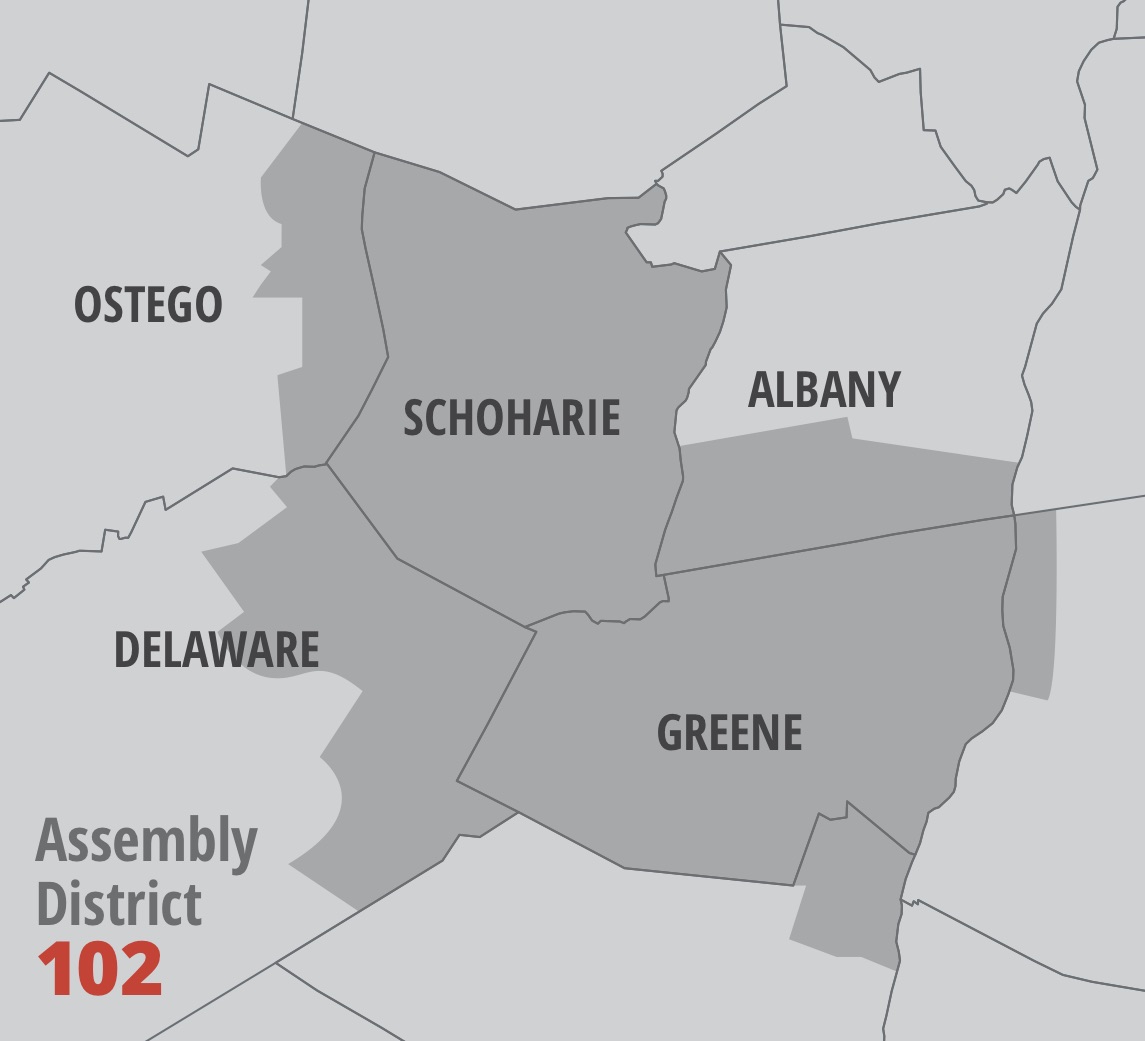 The district includes Schoharie County and extends south through the Catskills. Republican freshman Assemblyman Chris Tague of Schoharie is being opposed by Democrat Betsy Kraat of Hunter.

Tague, a former farmer and former manager of a stone quarry in Howes Cave, is among the Assembly’s most outspoken conservatives, speaking out against the chamber’s Democratic leadership on bail reform, state budgeting practices and other issues. He has also been outspoken in support of the region’s farmers, “fighting hard against the radical NYC Liberals and their policies that are killing upstate farmers and jobs,” as he recently wrote on Facebook. 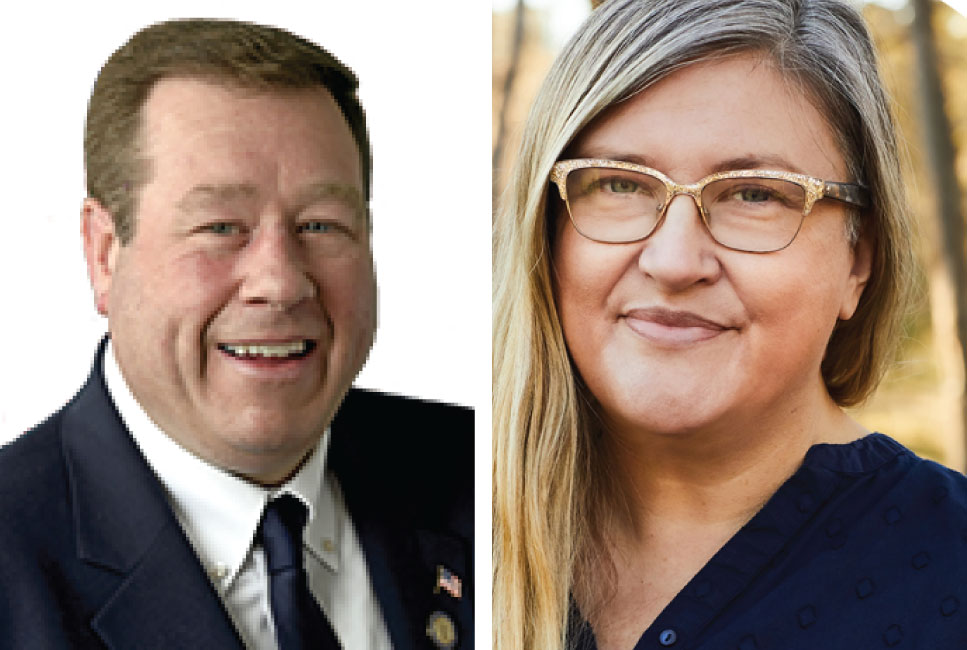 In Albany County, meanwhile, two veteran incumbent Democrats are campaigning for re-election against opponents who are little more than names on a ballot, with campaigns that have filed no financial disclosure information. Albany County, of course, is overwhelmingly Democratic by voter enrollment — and has been for 100 years, since the early days of Prohibition or when women got the vote, take your pick.

In the 108th Assembly District, Assemblyman John T. McDonald III is being opposed by Republican/Conservative Petros Papanicolaou of Cohoes and Working Families candidate Sam Fein of Albany, an Albany County legislator. (Fein actually has a campaign account, with $12,777 in it as of Oct. 14, compared with $76,000 in McDonald’s campaign coffers.)

In the 109th District, incumbent Patricia A. Fahy of Albany faces a challenge from Robert G. Porter, a former Marine and law enforcement officer who has also filed no campaign account information. He has the Republican, Conservative and Libertarian ballot lines.