The three Capital Region Congressional races to be decided Tuesday include a North Country contest that has received national attention, a surprisingly strong challenge and a likely landslide for a freshman congressman who knocked off an incumbent in 2018. By far the most high-profile and expensive race in the region – and the one that has received national attention – is the North Country race between three-term incumbent U.S. Rep. Elise M. Stefanik, R-Saratoga, and Democrat Tedra L. Cobb of Canton. The contest has been nasty, apart from the candidates’ ideological differences.

Stefanik, once the youngest woman ever elected to Congress, is now best known as a staunch defender of President Donald Trump. With attitudes toward Trump a defining issue, Stefanik has raised more than $11 million through this election cycle – and Cobb has raised more than $5 million, nearly five times what she raised for her 2018 run.

The money being funneled into the race has allowed both candidates to flood regional television airwaves with ads extolling their own virtues or, at least as often, attacking their opponent.

Stefanik, 36, was a key figure during last year’s House impeachment hearings, defending Trump at the hearings and then serving on the president’s impeachment defense team during the Senate trial last January. She is co-chair of Trump’s New York 2020 re-election campaign, and Trump has invited her to small-group meetings at the White House and singled her out for praise.

As a member of the House Armed Services, Education, and Labor and Intelligence committees, Stefanik says her top priorities if re-elected include creating economic opportunities and jobs in her mostly rural district, protecting Social Security and Medicare, and supporting the military and veterans. Fort Drum, near Watertown, is the largest and most active Army installation in the Northeast.

Cobb, 53, notes that she has lived in the North Country for 30 years – contrasting herself to Stefanik, who grew up in the Albany area and initially used her family’s seasonal home in Willsboro as her district address. Stefanik and her husband have since bought a house in the town of Saratoga within the district.

A married mother of two, Cobb has worked as a Spanish-speaking state corrections counselor, an AIDS outreach organizer, and in 1999 founded the St. Lawrence Health Initiative to provide rural health screenings and treatment. She served in the St. Lawrence County Legislature from 2003 to 2009.

Cobb’s campaign has focused heavily on protection of access – and expansion of access – to health care. Cobb has criticized Stefanik for voting repeatedly, following the lead of the rest of the Republicans in Congress, to repeal the Affordable Care Act, often called Obamacare, without a plan to replace it.

Cobb has also called for expansion of drug treatment programs to help address the national opioid crisis, and has gingerly approached the issue of gun restrictions in a district where firearms are popular. While supporting the rights o f legal gun owners, she says, “Congress has a moral and legal obligation to institute gun-related policies that protect the people. We must reject partisanship, and approach discussions about gun rights and public safety with sensitivity, objectivity and pragmatism.”

The race is a rematch of two years ago, when Cobb made her first run for the office. That’s the race in which the Stefanik campaign came up with the “Taxin’ Tedra” nickname – a tag Stefanik still gives her opponent – based on votes she took when serving in the St. Lawrence County Legislature while the county faced a financial crisis.

The 21st Congressional District stretches from Fulton County and central Saratoga County north to the Canadian border, and east-west from Lake Champlain to Lake Ontario. It is geographically one of the largest districts east of the Mississippi.

“No matter what the national politics is, this is a very white, very rural population,” Alexander Cohen, an assistant professor of political science at Clarkson University in Potsdam told the New York Times for an article on the race published last week. “And it’s all Trump banners.” 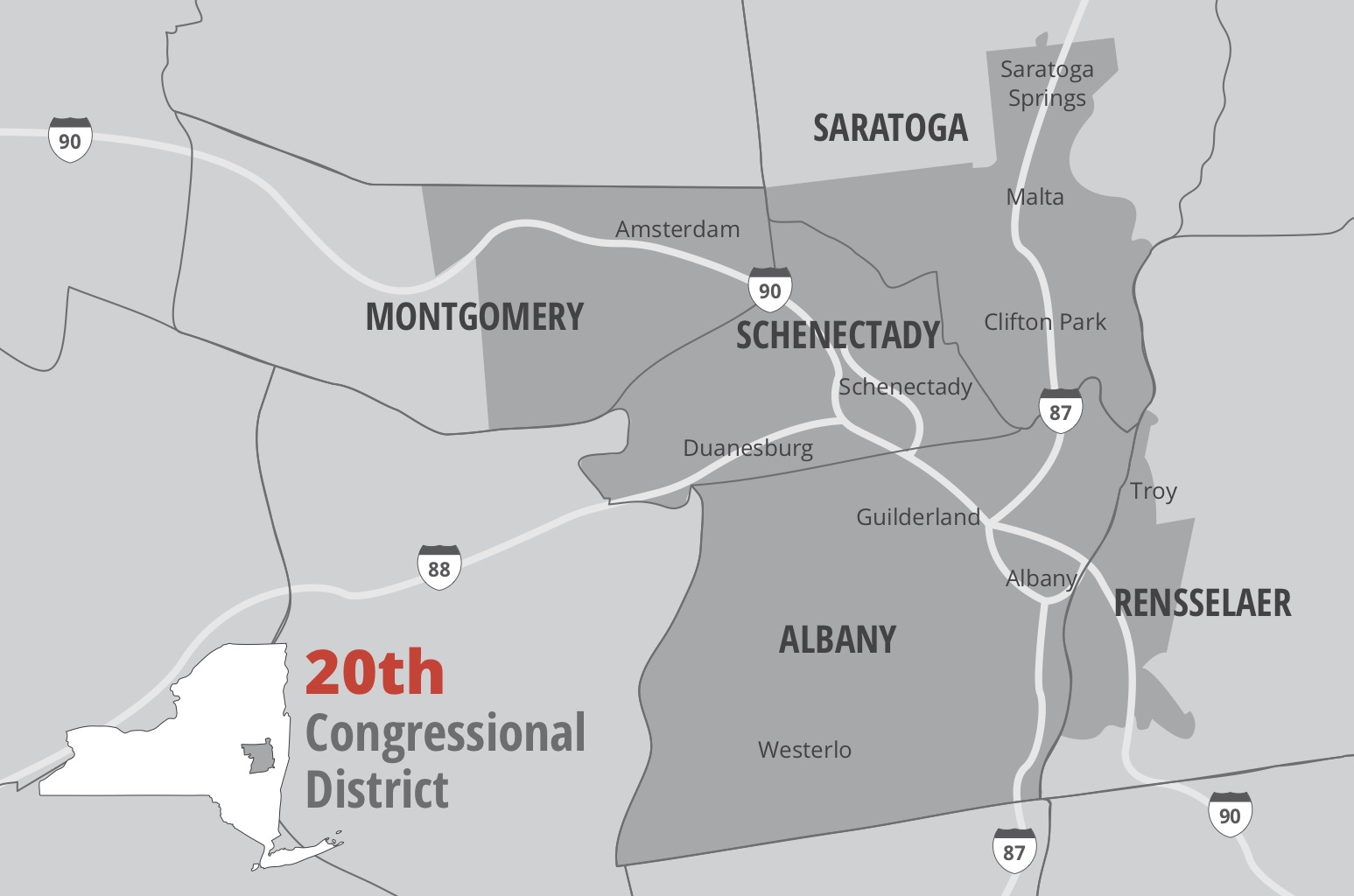 In the Capital Region’s main congressional district, meanwhile, U.S. Rep. Paul D. Tonko, D-Amsterdam, who has been in Congress since 2009, faces his best-funded challenger in years in Liz Lemery Joy of Schenectady, a Trump supporter.

Joy has raised $351,000 through this election cycle – enough for television advertising, something none of Tonko’s recent opponents had. But Tonko has still out-fundraised her, with $1.4 million raised and more than $800,000 available to spend as the campaign headed into its final days, according to Federal Elections Commission records.

Joy, 52, a native of Glens Falls, has campaigned on a platform of law and order and support for the military platform, citing her experiences when her husband was an active-duty military doctor.

“I began to fully appreciate the magnitude of freedoms we have in this great country called America,” she says on her website. “As we moved from military base to military base, I witnessed first-hand the sacrifices military men and women endured to maintain these freedoms on a daily basis. They selflessly gave and sacrificed with unparalleled patriotism for a land they proudly defended and protected.” Joy, a mother of four, is strongly pro-life “from the womb to the elderly,” she said at a recent candidate forum. She has called for cutting federal taxes to reduce the tax burden on individuals and businesses, and also cutting federal spending to reduce the federal government’s debt levels.

She supports allowing health care insurance policies to be sold across state lines to increase competition and for families to be able to buy insurance tailored to their needs, as long as preexisting conditions are protected.

Tonko, 70, is a lifelong Amsterdam resident who has been an unwavering progressive in his politics throughout his career, favoring expansion of health care access to more people and backing government social improvement programs and infrastructure spending.

Tonko’s campaign issues this year include protection of the Affordable Care Act to provide health care access; expanding social justice; taking aggressive action to fight climate change; and – in a direct attack on the anti-science attitude Democrats see coming from the White House – a strong defense of the integrity of science. One of the few engineers serving in Congress, Tonko says that “securing funding for science and clear climate policies is one of the reasons I first ran for Congress.”

Tonko serves on the Committee on Science, Space and Technology and the Energy and Commerce Committee. “As an engineer, I understand the importance of clean energy and the continued advancement of innovation in technology sectors,” he says on his campaign site.

The 20th Congressional District, which includes the Capital Region core cities of Schenectady, Albany, Troy and Saratoga Springs, is overwhelmingly Democratic by voter enrollment, with 211,912 registered Democrats and 116,444 registered Republicans as of last February, according to the state Board of Elections. The contest features U.S. Rep. Antonio Delgado, D-Rhinebeck, 43, a freshman legislator who looks to be an overwhelming favorite to win re-election. Two years ago Delgado, the first Black member of Congress ever elected from upstate New York, defeated incumbent Republican John Faso in a year when Republicans suffered congressional losses across the country.

Since he took office, Delgado has held dozens of town hall events and meetings across the sprawling district, which is almost entirely rural. While it is centered in the Hudson Valley and Catskill Mountains, the district includes all of Schoharie County and western Montgomery County.

The Republican candidate is Kyle Van De Water, a Poughkeepsie area lawyer who didn’t enter the race until late last spring. But his campaign has little of the funding running in such a large district requires: As of Oct. 14, he had about $54,000 in his campaign account. Delgado has more than $3.3 million in his coffers.

If re-elected, Delgado said, he will continue to push for money to expand broadband internet access; will pursue COVID-19 pandemic stimulus relief to help small businesses, revenue-starved local governments and individuals impacted by COVID; and will seek grant funding for community growth projects. “People are hurting and have been since March,” Delgado said.

Van De Water, 41, grew up in Poughkeepsie, attended college on an ROTC scholarship and was an active duty military lawyer after graduating from Albany Law School. He is now in private practice, though he continues to serve in the Army Reserve.

He is also a “law and order” candidate, seeking to tie Delgado to national Democratic leaders such as House Speaker Nancy Pelosi and presidential candidate Joe Biden.

“We have to protect our communities and keep our families safe,” he wrote on Facebook last week. “We need law and order not anarchy and pandemonium. We need to support our brothers and sisters in law enforcement and not those who riot and loot and threaten to burn our communities down to the ground. The police put their lives on the line for our safety, the very least we can do is provide them with the equipment they need along with our gratitude.”

Both men are married with young families.

The 19th District race is the only local congressional race in the Capital Region with minor-party candidates on the ballot. They are Victoria M. Alexander of Amenia, running on the Libertarian line, and Steven Greenfield of New Paltz, the Green Party candidate.