Hornbeck was an iconic craftsman and his canoe designs were known for being lightweight, but retaining their beauty and craftsmanship.

According to a notice posted on the Hornbeck Boats, Inc. Facebook page, before he passed, Hornbeck took an annual Christmas walk with members of his family.

His death came as a shock, according to the post, as Hornbeck had received a clean bill of health from his cardiologist earlier this month.

“We take solace from knowing he went quickly, in the place he loved, with the people he loved most,” the post said.

Comments poured in locally and from across the nation, remembering the man and his crafts.

“We tell often about the day we acquired our Hornbecks, unbeknownst to each other for our 25th anniversary,” Niskayuna Life Chiropractic’s Dr. Diana Galish-Frasier commented on Facebook, about her purchase with her husband, Cliff. “Peter spent a few hours with us, so proud of all he’d built — his passion even after so many years!

“He signed and dated my beautiful anniversary boat, gifted me a beautiful watercolor he painted, offered us pizza and talked and talked. We’ll forever cherish our special day with Peter, as well, the special ships that will live on in our family for generations.”

Ron Turbide of Canton had purchased three different canoes from Hornbeck in the past six years, recalling the boat craftsman fondly from Florida on Sunday afternoon.

“I purchased three boats from the gentleman; he was just an amazing, amazing person,” Turbide said. “Once you met him, you felt like you had known him forever.”

Turbide purchased a New Trick model six years ago and then added a Classic model before purchasing another for his wife; both canoes remain at their home in Canton.

Hornbeck’s canoes remain on the water, bringing generations together.

“We’ve known Pete and have been using his boats for backcountry paddling adventures in the Adirondacks for nearly four decades,” Phelps Turner wrote. “In speaking with my father about Pete this morning, he mentioned that he made a habit of mentally thanking Pete for every paddle in one of his boats.”

According to the HornbeckBoats.com website, Hornbeck started building boats in his garage in 1971, fine-tuning his design by 1975. He retired from Johnsburg Central Schools in 1992 and began building boats full-time starting with his Classic. In 2005, he created a new line known as the New Tricks.

While beautiful to the eye, what was astounding was the overall weight of the Hornbeck. 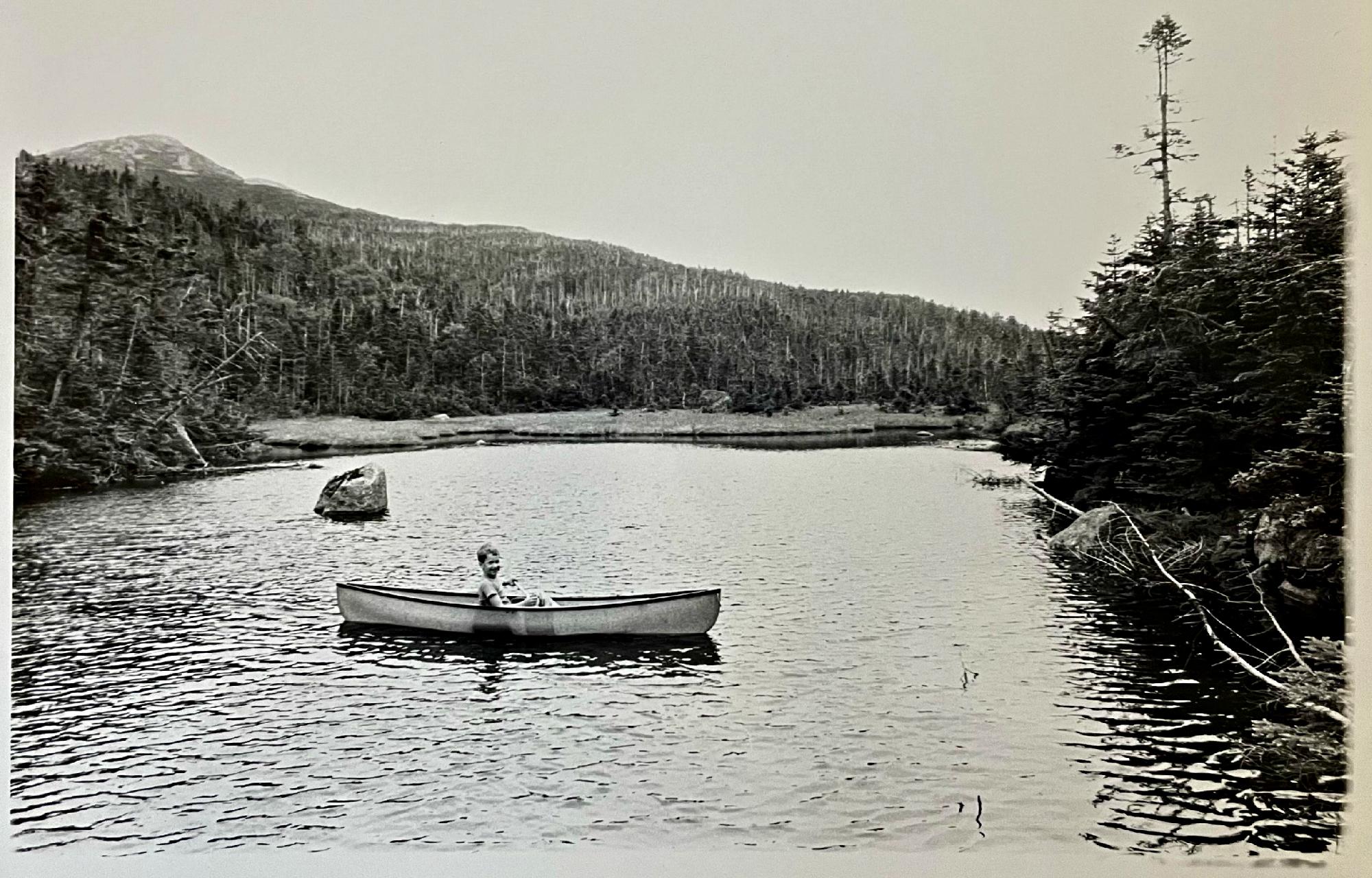 PHOTO COURTESY PETE CISZEWSKI
9-year-old Phelps Turner is pictured in this 1987 photo in his Hornbeck boat on Lake Tear with Mount Marcy in the background.

Dr. Daniel Way writes on his website under the “League of Extraordinary Adirondack Gentlemen” page where he documents the travels of a group of adventurers, craftsman, and close friends, and noted what he calls the “Hornbeck Effect.”

“This happens when we encounter other paddlers slogging along in their 50-pound canoes who watch us picking up our lightweight boats,” Way wrote. “I always invite them to pick up my 11-pound carbon-fiber Black Jack and watch their face.

“My favorite example occurred in 2014 as we stood at the boat launch on Forked Lake, when an 86-year-old veteran canoeist picked up my boat. His expression was priceless!”

There are no services planned, a memorial service may be announced in the spring, according to the post.

Thank for this nice tribute.
Just a friendly correction note that it’s called Lake Tear of the Clouds (see the photo caption).