Shares0FacebookTweetEmail
CORRECTION: An article and chart in Thursday’s paper about state education funding misstated the funding increase the Saratoga Springs school district will receive under the state budget. The district is projected to recieve a 3.8 percent increase in foundation aid, rising from $22,591,411 to $23,456,816. The previous article used the wrong base aid level, showing a much larger increase. The chart below has been updated to reflect the accurate numbers.

After decades of activism, litigation and political machinations, state lawmakers Tuesday committed to fully fund the state’s core education aid formula over the next three years, a promise that will significantly bolster school budgets in Schenectady, Amsterdam and districts across the region.

Budget language released Tuesday morning included a three-year phase in of so-called foundation aid, a funding formula that aims to distribute state aid based on the needs of individual districts. Statewide the formula is over $4 billion short of full funding, and the state budget lawmakers were finalizing in Albany envisioned boosting the state aid about $1.4 billion a year over the phase-in period.

In Schenectady, the funding commitment represents about $40 million in new state aid over the next three years. The formula says that Schenectady should receive over $140 million in annual state aid, but the district received just over $100 million in foundation aid this year.

In Amsterdam, the funding formula calls for the district to receive nearly $47 million in state foundation aid, but the district only got $32.5 million this year. Niskayuna is shorted $8.5 million, under the formula, while Mohonasen would see another $5.4 million in annual state aid if the formula is fully funded.

The commitment will have widely varied impacts on districts, though, as some districts have fallen further and further from “full funding” in recent years while other districts, particularly those that have lost significant enrollment in recent years, are already considered fully funded under the formula.

The statewide fight over foundation aid has been central to education policy for years, and a longstanding series of lawsuits has accused the state of failing to meet a constitutional obligation to provide all New York students a “sound basic education” in falling short of fully funding foundation aid.

Jamaica Miles, a Schenectady parent and community activist, joined the lawsuit over three years ago, placing the district at the center of the statewide fight. Miles, who said she was pulled into activism after experiencing education disparities firsthand when her oldest child was a young student in Schenectady, on Tuesday said she was “in the best mood ever” after hearing news of the commitment to fund foundation aid.

“It’s been almost 10 years, it’s my youngest daughter’s entire life that I’ve been doing this,” Miles said of advocating for fully funding foundation aid. “I don’t even think I have the words.” Miles said she still hadn’t had a chance to discuss the latest developments with her lawyers.

Damonni Farley, a parent engagement specialist in Schenectady schools and longtime advocate for increased funding in the city’s schools, on Tuesday said he remembered many times over the years people asking him about the foundation aid advocacy: “You guys are still talking about that?” people would ask him. He said that work paid off in Tuesday’s budget.

“It was so much common sense,” Farley said of Schenectady’s need for increased resources to address student challenges. “It seemed like a really, really heavy lift, but this is just the right thing to do.” 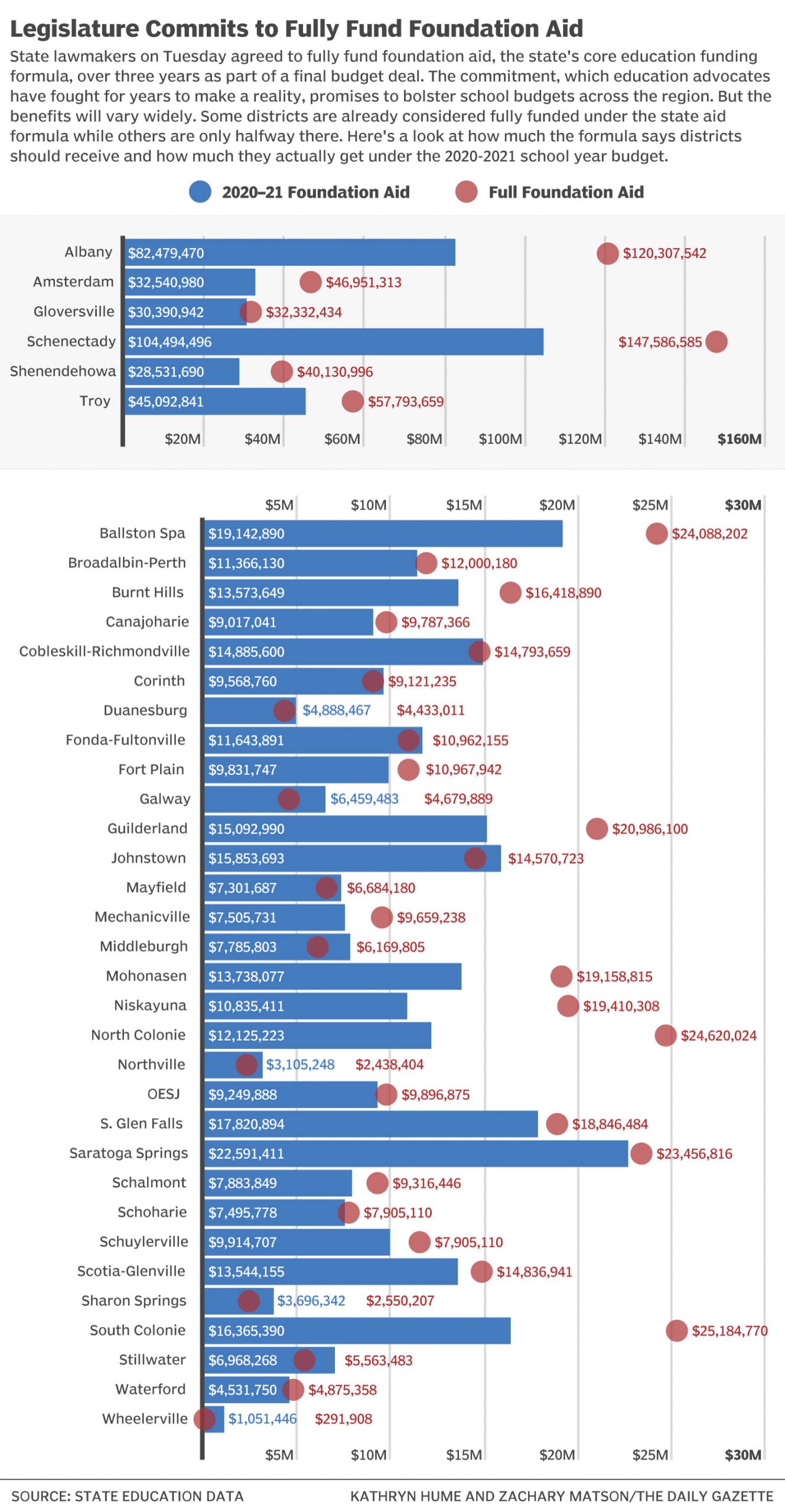 Farley and Miles both said it will be critical that district leaders empower parent and community members to lead decisions about students’ most-pressing needs and how the money should be invested in the coming years. Miles said that engagement should guide a broader process about making decisions about how to use the money – rather than as a checkbox in an already-established process for budgeting the new aid.

Education advocates across the state took a victory lap of sorts after details of the budget agreement emerged Tuesday morning, lauding a commitment they have long argued is necessary to ensure districts – especially the high-poverty districts that served many of the state’s students of color – have the resources to provide students a basic education.

“It means we can reduce class size, it means kids will now have access to arts, music, academic supports … it means there will be science labs in all of our science classrooms,” said Jasmine Gripper, executive director of the Alliance for Quality Education, an advocacy group established over 20 years ago to serve as a platform for parents calling for increased school aid. “We have been so far from equity for so long, and the reason we couldn’t get there was resources.”

Other districts around the Capital Region will also benefit from the deal. Some wealthier suburban districts have seen small annual increases in foundation aid in recent years and have fallen far short of full funding under the formula. Niskayuna, for example, has received just 55 percent of the state aid the formula says the district should receive: around $10.8 million out of the $19.4 million called for in the formula. The deal guarantees boosting every district’s aid levels to at least 60 percent of the aid called for under the aid formula. North Colonie, which received just shy of 50 percent of its foundation aid, according to state data, could see its annual state aid increase by around $12 million once the formula is fully funded.

Many rural districts, though, have already been fully funded under foundation aid. As enrollments have declined in recent years, those districts have been “held harmless,” so they maintain funding levels even as the formula suggests they should receive less money than they do. All districts would see a minimum 2 percent increase in foundation aid under the budget plan.

The state budget, which included tax hikes on the state’s wealthiest residents to help pay in part for the school aid increases, marks an enormous turnaround in the financial outlook for school districts across the state in the past year, when things looked as dire as they have in a long time as recently as late fall.

Now, the state has promised to fully fund current year aid and lawmakers boosted aid well beyond that; the federal government approved billions more in direct aid to districts meant to help schools recover from the pandemic; and state lawmakers promised to continue lifting school aid for at least another two years.

“We are in vastly better shape than I would have dared to hope back in October,” said Bob Lowry of the state Council of School Superintendents.

For Schenectady, the threatened withholding this year has been wiped away, the federal aid represents around $60 million over the next four years, and the foundation aid means increasing its annual state aid figure by around $40 million by the 2023-2024 school year.

“Over the years the state has missed the mark on providing an adequate and equal share of funding that addresses the needs of our local schools,” Assemblyman Angelo Santabarbara, D-Rotterdam, said in a statement Tuesday as lawmakers cast votes on various budget bills. “This funding is an investment in the future of public education, serving as the foundation to build upon as we strengthen public schools.”

The budget also stripped numerous policy proposals from Gov. Andrew Cuomo’s executive budget, which he outlined before the state’s fiscal outlook improved with the help of a massive infusion of federal aid. Those proposals included consolidating reimbursement-based aid categories and cutting district STAR payments, which were jettisoned by the Legislature.

The state aid runs, which outline district-by-district funding totals under the final state budget, were not available by 5 p.m. Tuesday.

Will they use the increase to lower taxes, or will they spend it? I’m guessing the later.

Considering how long they’ve been underfunded, and that they have the care of tomorrow’s citizens in their charge, could you blame them?
Not me.

It cost around $22,000 to educate a child in a failing public school system. If we enact school choice a child can get a quality education for around $10,000 a year in a private school. I think it’s obvious what should happen and anyone that disagrees with that doesn’t care about the education of children, especially minorities.