Beth Sweet stood in front of the white painted wooden shelves at the Scotia Branch Library scanning the rows of DVDs looking for some weekend entertainment.

“I’ve been coming here since I was a little girl,” Sweet said.

The Schenectady County Legislature will vote Tuesday to extend the lease between them, the county library system and the village of Scotia for the library another 23 years until 2070. The lease was set to expire in 2047.

The lease extension means the county will have more time to help the library expand and maintain its historical presence in the community.

The county will add a 850-square-foot addition off the back end of the building, which will be used for meeting space and have handicapped accessible restrooms. Renovations will also be made to the building. Those renovations include:

Sweet, who continues to go to the library at least once a week, said the addition is an awesome idea. 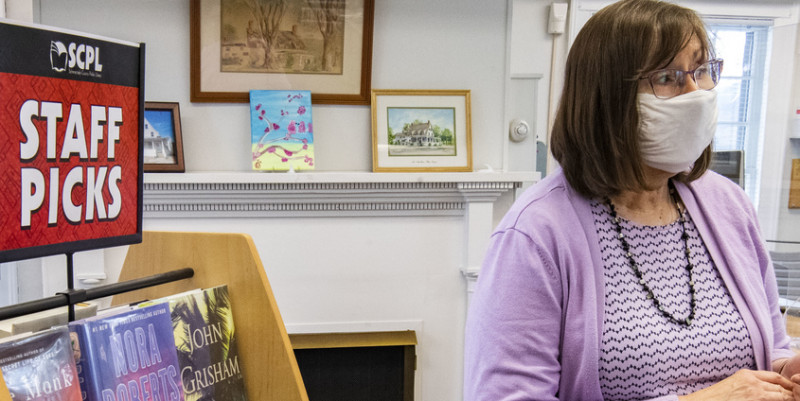 The library has been housed in The Abraham Glen House since 1929 after the Collins family deeded the property to the village for $30,000. The house was built around 1730. Descendants of Abraham Glen lived in the house until 1842, said county Historian Bill Buell. In 1842, the Collins family purchased the house and lived in it until the early 1920s. Annie Collins bequeathed the house to a Catholic sisterhood called the Daughters of Wisdom who wanted to use the property to house disabled children but realized they were unable to due to the way the house was built, Buell said. So, in 1928 the property was handed over to the village.

Buell said the building has been on the National Register of Historic Places since 2004.

Library Supervisor Brenda Rice said the addition also means more space for programs the library offers like crafting, after-school and summer kids programs and yoga. Yoga is currently held in one of the main spaces and accommodated more than 20 people at one point or another. But limited space throughout the entire library means it can feel cramped at times, an issue the addition would relieve. Hedges said the community is continuing to grow and use the space for various reasons and in order to make everything possible “we have to grow.”

Hedges said plans for the addition have already been approved. County Attorney Chris Gardner said in a memo to the legislature committees the project is estimated to cost $760,000, of which over $345,000 will be covered by a state grant. Gardner said the county will cover the rest of the project’s expenses. He also said  Saturday that the project could start within the next month.