As Sabrina Whitman sat in a bus shelter at Gateway Plaza late last week, she was unabashedly clear: This is a place she feels comfortable smoking marijuana.

And that was well before the recent state law made it OK, the 18-year-old city resident said.

Whitman motioned to a nearby grass field where she and others smoke pot regularly. She said she smokes cannabis there almost daily, adding that it helps with anxiety she experiences while riding the bus.

Whitman said she’s made friends with other smokers there. Occasionally, someone might tell them to stop, but mostly it’s accepted, she said.

The state legalized adult-use cannabis for recreational purposes March 30. The Empire State is now one of 15 states along with Washington, D.C., to legalize it.

Sales from retail stores won’t become legal for an estimated 18 months, as the state works on regulations.

But other parts of the law are in effect. New Yorkers can possess and use up to 3 ounces of marijuana. Smoking or vaping marijuana in public is allowed, but not in places where smoking cigarettes is prohibited.

Also, motorists cannot smoke marijuana in their vehicles. If drivers are stopped for a moving infraction and there’s a presence of fresh marijuana smoke, law enforcement can search vehicle compartments. 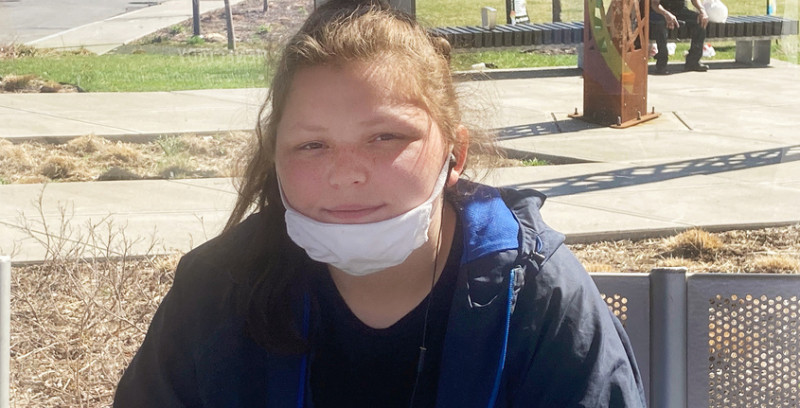 Whitman was asked when she noticed the shift to public pot use as a societal norm.

“I started going around people slowly and started smoking slowly,” said Whitman, who indicated she likely won’t buy from retail stores when they’re up and running because of the expense — a 9 percent state sales tax, 4 percent county and local tax, and an additional tax based on the level of THC.

“I started realizing not many people cared,” Whitman said.

But, as Whitman notes, there are many who do care. And they said a bad situation only stands to get worse under the new law.

At Central Park, while he enjoyed a school vacation day of fishing with his 6- and 8-year-old children, Samuel Slick of Rotterdam said the ubiquitous pungent odors of pot around the city get him fired up.

“Even when you go to Price Chopper and Walmart, you smell it,” Slick said. “Nowhere is safe anymore.”

Although the local man is not a consumer of marijuana, he said he doesn’t have a problem with adults who use it.

“But when my kids are forced to smell it when we go shopping … they ask, ‘Daddy what’s that smell?’ ”

Slick said he doesn’t agree with how the law is being rolled out in New York. Street-level dealers, he said, can maintain their footing in the market for more than a year as rules are put in place for pot shops.

But fellow Central Park user Derrick Cole flashed a smile when asked about the new marijuana law. He spoke of what he said were the plant’s many positive attributes. 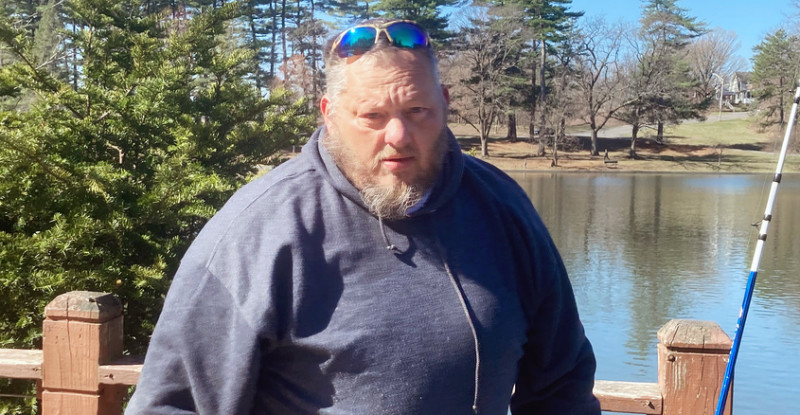 Samuel Slick of Rotterdam, fishing in Central Park Thursday. He is concerned about marijuana use in public spaces. Credit: Brian Lee

He suggested the city consider designating a section of parks for marijuana consumers, if it’s so offensive to some park attendees.

“It’s a relaxing type of drug,” Cole said. “So, for the times and in the area that we are living in, it’s a good thing. It adds a little spice to the world.”

Mary Cagnina of Schenectady said she’s accustomed to marijuana odors while she frequents Central Park. She said she doesn’t have a problem with it, as long as smokers stay away from kids.

“I don’t think it’s gonna make any difference,” Cagnina said of the new law and public consumption. “People are going to get high. They come up here, they smoke and go home. It should have been legal a long time ago.”

Opinions run the gamut among leaders of neighborhood associations.

Suzanne Unger, president of the Stockade Association, said she hasn’t heard “a peep” from members about concerns over public marijuana use.

Derrick Cole, of Schenectady, with his boxing gloves at Central Park. Cole supports use of cannabis and suggested designated space in parks for people to smoke pot. Credit: Brian Lee

Making it clear she was speaking for herself, and not the association, Unger said she doesn’t consider public use of marijuana a problem in the city.

Unger said she frequently visits her daughter and son-in-law in Seattle. In 2012, Washington state was the first U.S. state to legalize recreational-use marijuana.

“It’s a beautiful city,” Unger said, noting the occasional odor on Seattle streets “doesn’t seem to have had a bad effect.”

But Camille Sasinowski, vice president of the Goose Hill Neighborhood Association, said she was already frustrated by open pot use close to her home.

Sasinowski lives next to a six-unit apartment building at which she said it’s common for people to openly smoke pot.

“They’re out there, some of the tenants, doing their joints and everything, day in and day out,” she said.

“Unfortunately, in the lesser neighborhoods, I think it’s going to be totally abused,” she added.

It’s going to reach a point, Sasinowski said, where people will no longer be able to sit on their stoops and enjoy other neighbors.

“We’re going to have to keep ourselves away from it by going to a different location, just to have some camaraderie and not smelling and inhaling the secondhand smoke,” she said.

Public consumption was a problem before the new law took effect, according to Marva Isaacs, president of the Hamilton Hill Neighborhood Association.

“When you make it legal like this, the young kids are going to be out there smoking it more,” she said. “They’re going to be smoking and drinking and throwing bottles on the street. … We have enough problems here. We don’t need this.”

Chris Morris, president of Schenectady Landlords Influencing Change, said she’s received calls from landlords who bemoan pot use in their buildings and its impact on neighbors.

“I can’t imagine where this is going,” Morris said, adding that the marijuana law adds to what she called the “power of the tenant.”

“Above all else,” Morris said, “we just would appreciate if people would just be decent citizens, do the right thing and follow some reasonable rules. [That’s] what life is about — and getting on with each other. That has not been happening enough. We’re struggling with that.”

Deborah Rembert, president of the Schenectady Tenant Association Meeting Program, acknowledged “the difficult line to walk” between her personal view of recreational marijuana use and the rights of renters who want to smoke pot.

Rembert said she’s personally against marijuana, other than for medicinal purposes.

“We just think that’s another situation — like cigarettes, like alcohol, and all those things — that’s not good for people,” she said.

She said the dynamic of renters who smoke marijuana and landlords’ views about it warrants a deeper, high-level discussion.

“We’ve got a lot of issues happening to us this year,’ Rembert said of people struggling to make ends meet during the pandemic. “This is just another one.”

It’s too early to know whether the city would set a moratorium, opt out or fully endorse marijuana businesses, Mayor Gary McCarthy said.

“I don’t think we’ve looked at any of that,” he said. “Some THC vendors have been in the city, but it’s still fairly early. We’re just going to wait until some of the final regulations are published and look for general community input to see what may happen or may not happen.”

Schenectady won’t likely be a contender for marijuana cultivation operators, McCarthy said. Commercial growers will need large tracts of land and open space, which the city lacks, he said.

The mayor also addressed the perception that the new law will increase marijuana smoking in public spaces.

“There’s been a cultural shift where I’m not sure Schenectady is unique in that there were more people using it. We’re looking for people to comply with whatever the regulations are for particular activities. It’s something where we just want to manage it. We don’t want people creating problems for themselves or neighbors and people they might come in contact with.”

It’s unclear whether police targeted public use prior to the law taking effect. Police Chief Eric Clifford did not respond to an email this week.