On the urging of the owner of Mountain Ridge Adventure in Glenville, 14-year-old Mia Casalinuovo of Clifton Park let out a Tarzan yell as she trolleyed from a high zip-line platform, then descended to the ground from a cargo net.

The treetop obstacle and zip-line park opened for the season this weekend.

Casalinuovo is a member of a Capital District Firestorm club soccer team. Club owner John Quimby rented the park for three hours Sunday for about 50 players on six of his teams.

It was to let off steam, and for a needed team-building activity during the 14th month of the COVID-19 pandemic, Quimby said. 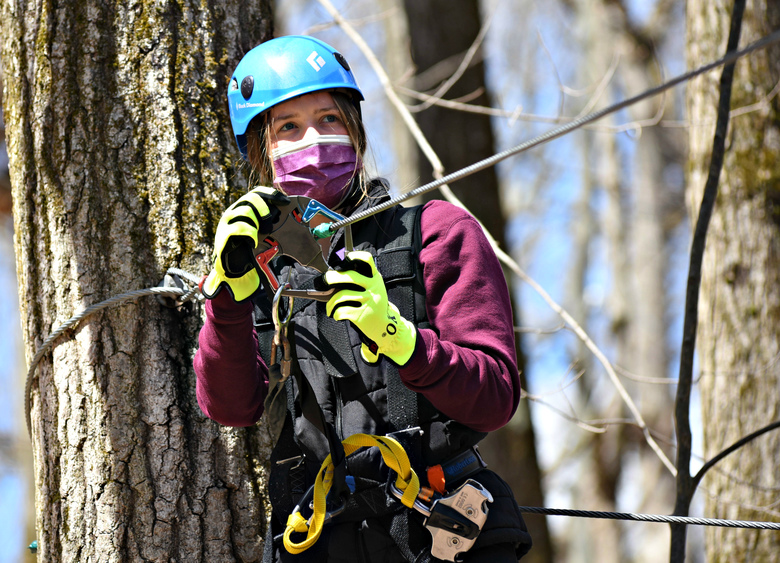 The park has treetop zip-line platforms as high as 70 feet off the ground as users traverse obstacles.

“It’s been a tough year with everything,” Quimby said. “We’ve been playing a lot, but mentally they needed something like this.”

Quimby said he got the idea to bring the teams after he had a casual meeting with a park worker who suggested the program could benefit from using the park.

“I waited until they opened, and the weather worked out and it’s been great,” said Quimby, whose players are ages 11 to 17.

While fun, Casalinuovo said the park pushed her physically.

Also, it’s helping with team communication, said Casalinuovo, who fills in at every position on the field.

She said her team hasn’t been able to practice as much as it wants. 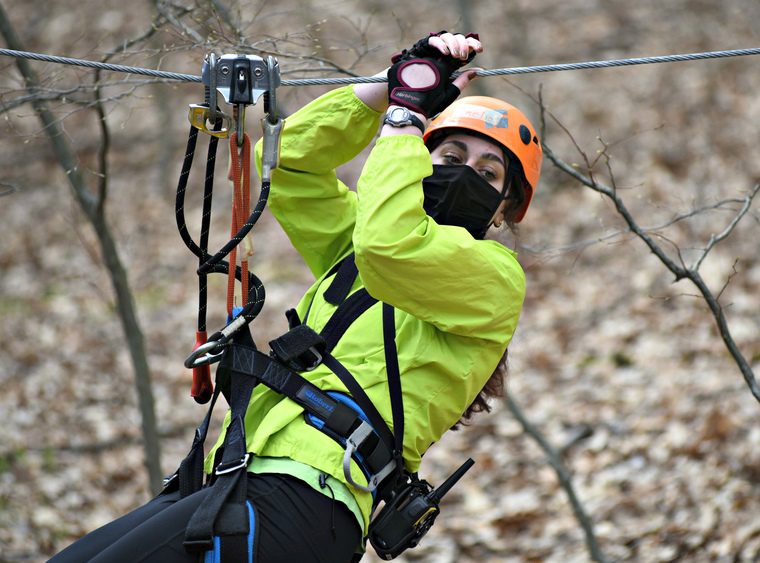 Amelia Cataldo of Burnt Hills demonstrates what to do if an adventurer is stuck on the rope line. STAN HUDY/THE DAILY GAZETTE

“It’s definitely harder because of COVID,” the teen said. “We sometimes reached out and we can maybe go on a team run, or just have a team FaceTime to check in with everybody.”

The course, which is on a 50-acre plot of land, lends itself to spacing because only one person can use an obstacle at a time, Cellini said.

The park only keeps an amount of equipment for not more than 60 people at a time, she said. 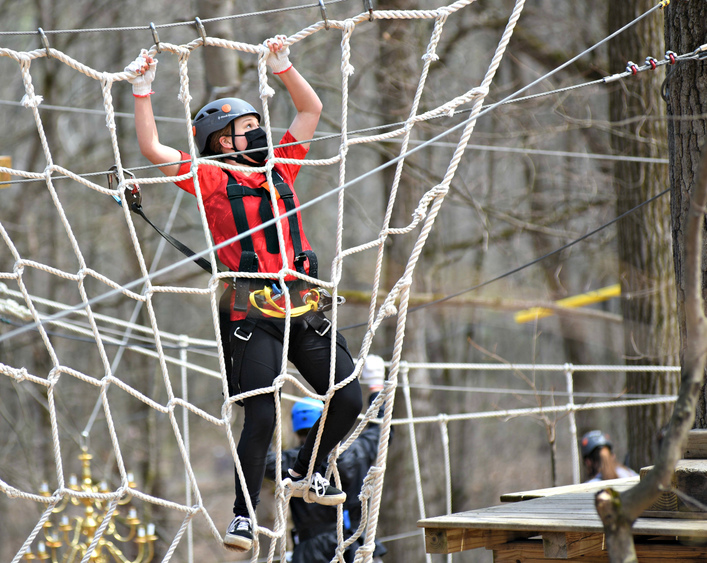 Cellini said workers try to keep lines moving and do their best to mitigate traffic.

“If you are stuck in a line and just kind of bored it’s not fun,” she said.

The park is in its sixth season, said Cellini, a structural engineer who co-owns the business with her husband, Michael.

It started, she said, when Cellini gave her husband a zip-line as a Father’s Day gift.

The park is open April until Halloween, during which it has “Zombie Zips,” Cellini said.

Last year, at the onset of COVID, the state required it to remain closed the first three months of the year.

It reopened at the end of June.

Except for the first week, when it struggled to get the word out that it was open, the park was sold out most days, Cellini said.

The business, which also has an add-on of a 40-foot drop from a platform called the Leap of Faith, spoke to the area’s pent up demand for outdoor activity during the pandemic, she said.