ALBANY — Police ended a week-long encampment of anti-brutality protesters outside the department’s South Station Thursday, as authorities removed tents and their contents and led protesters from the scene in handcuffs.

Prior to those actions, police gave the group 15 minutes to disperse.

Protests began last week, after an altercation between demonstrators and officers in a Black Lives Matter protest.

After the encampment was destroyed, dozens of officers in riot gear formed a wall at two locations around the department on Arch Street.

Members of the State Police and Albany County Sheriff’s Office stood with them.

The officers were silent as protesters angrily confronted them and hurled insults. 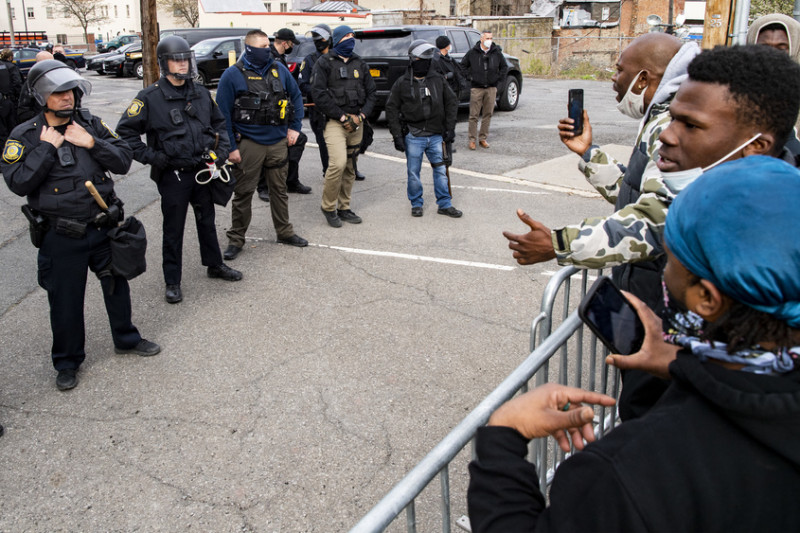 Protesters square off against Albany police officers during a confrontation near the South Side Police Station on Thursday. PETER R. BARBER

At one point, a Black commanding officer walked the line, asking rank-and-file officers if they were OK in the face of the disparaging remarks.

In response, a protester told a white officer, “You definitely call your superior a [n-word] when you’re at home.” She then asked the officer what part of her skull did he want to crack open.

In a statement, Police Chief Eric Hawkins said it was time to end the unlawful occupation.

“For several days,” Hawkins said, “protesters have occupied the roadway in front of the South Station. The Albany Police Department, in efforts to support the freedom of expression and to de-escalate a tense situation, did not interfere with this unlawful occupation.

Chandler Hickenbottom of Saratoga Springs pointing at Albany PD in riot gear after they broke up occupation of South Station today. pic.twitter.com/BP64pRV8a9

“We have heard the grievances of the protesters loud and clear. We have also heard the concerns from members of that neighborhood as well as officers and non-sworn staff who serve from the South Station. For public safety purposes, it is time to end this unlawful occupation.

“Protesters may continue to peacefully demonstrate, but they must do so in a space that is safe and lawful.”

Alice Green, a civil rights advocate and director of the Center for Law and Justice, said the police should have found a better way.

“That was terrible to give them 15 minutes to move,” Green said. “Here we [have] been working all this time to improve relationships, and they do crazy things that totally destroy it.

“We had a perfect opportunity to come up with a plan that would reinvent policing, and the city refused to do it. They haven’t done it. We have no way of doing it now because they basically shut the doors.” 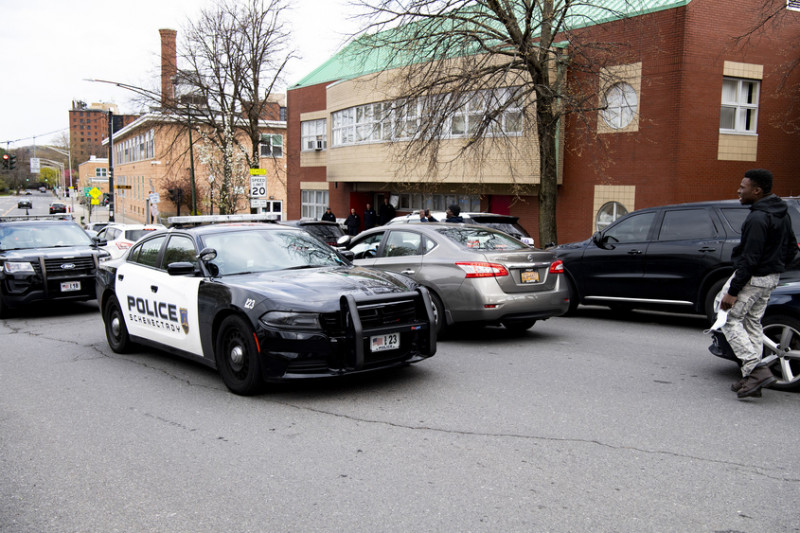 “Honestly, I pulled up to the scene and I was very angry with everything, just because, protesters have been out here for six days, and this department literally made zero attempts to have any communications with them.

“And then just to come out here today and give them 15 minutes, destroy all their personal property, destroyed my friend’s medication,” Negron said. “The community donated all this stuff.”

Negron said the police’s treatment of the encampment was “a spit in the face to the community, and to the city,” and a failure in leadership.

“I pretty much pulled up to the scene because I wanted to have a conversation with whoever made this decision,” Negron said, calling it a further bridge between the community and police.

Chandler Hickenbottom, 25, of Saratoga Springs, said she’s among a coalition of organizers of the encampment.

“We decided that we were going to do a protest and an occupy, and we came up with demands,” she said. “We wanted our demands met and we were gonna stay here until our demands were met.”

Hickenbottom said the protesters received donations from friends and community members from all over the Capital Region.

But she said she left the encampment for a time Thursday to have her teeth checked out from what she said was a prior assault by police. 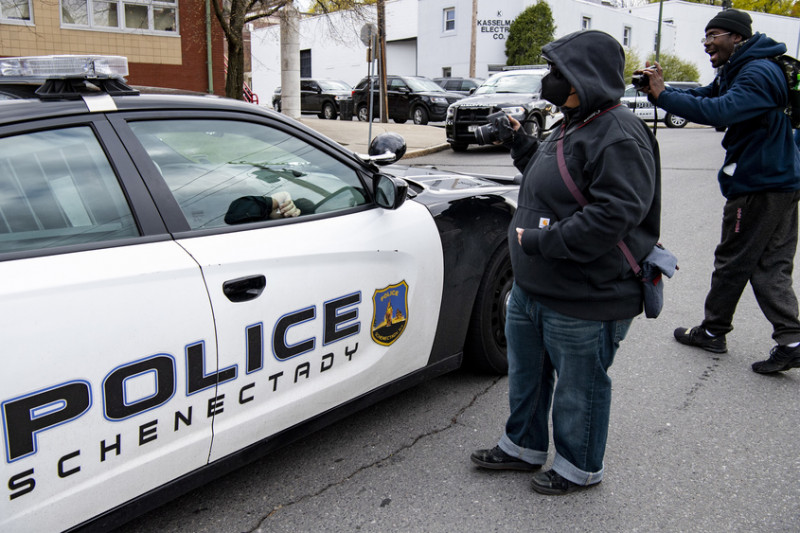 “I came back, and this is what I come to,” Hickenbottom said as she watched a garbage truck drive off with contents of the encampment.

“I have several autoimmune diseases. I have a lot of medicine that’s in there, that’s really expensive,” she said, crying.

“They burned a lot of important things in there,” Hickenbottom said, noting that the group wanted to donate unused food and hygiene and feminine products.

“These people have continuously re-traumatized us at this station,” she said.

“There is no excuse for police violence against protesters anywhere in New York state,” Nagy said.

“Members of Albany law enforcement are instigating violence while reportedly concealing their identification badges,” Nagy said. “They are deploying weapons like tear gas on protesters. This is neither accountability nor justice, and shows that the police are deliberately refusing to police themselves.”

At 8 p.m. Thursday, a spokesman for the Albany Police Department tweeted that eight individuals were arrested and face various charges ranging from disorderly conduct, obstruction of governmental administration and riot, second degree. Several individuals were sent to the Albany County Jail while five others were released on appearance tickets and will appear in court at a later date.

It would’ve been good to report on exactly what their demands are.

I’m totally sympathetic to the cause, but if what was reported earlier about the police station being attacked, racial slurs thrown against cops, and today one protester stating they were demanding the mayor and police chief step down, y’all be trippin’.
That’s not helpful, and it’s kind of disingenuous to think you’ll be able to just demand respect.

The so called protesters are nothing but a bunch of thugs they tried to occupy the south station by trying to bully there way in last week and they think that’s peaceful protest.There rioters and they think they should get away with that if u want respect u have to earn it and from what I see they have not earned respect.They were asked to leave but of course they didn’t so Albany did what they had to do.These rioters seem to think the law doesn’t apply to them.Albany PD good job for standing your ground and taking ur street back.There are alot of people that Back the Blue💙and respect the uniform.People are sick of all the rehetoric about racism the only people who are racists are the one always talking about the color of there skin.Martin Luther King must be rolling in his grave all he did for freedom and all this bullshit has reverted this country right back to the 50’s it’s disgusting

Just to be clear, I do not agree with a good part of your post, nor the tone. And I hope it wasn’t intended to enhance mine in any way.

There’s no question we have a massive problem within the culture permeating law enforcement, and it’s a “we’re-above-you-and-the-law” attitude. And it’s especially directed at minority communities and that makes it white supremacist, racist. Hopefully this is the moment we can come to terms with that better.

As far as my criticism above, while I fully support the sentiment and the cause, reports I’ve been hearing from multiple news sources, are that these folks’ weren’t serving that cause very well (neither were our hapless local news media). Albany is not without issues in law enforcement, but Albany is damn lucky to have people like Mayor Sheehan and Chief Hawkins (and County Sheriff Apple), people who have demonstrated a desire to be engaged with all communities.

I watched the occupancy and did not hear anything aboit demands. What is did hear was people calling the police spicy pigs among other insults. People who do not live in that area are quick to accept this behavior but what about the rights of the inncocent citizens who live in that area. Even if they do have demands, there are better ways to open communication than to put up tents and have literal FECES in tbe street. So society thinks this ok to have bodily waste in the streets all while covid is a risk. I think we shoupd start protesting the propaganda that is rampant in our country right now