The newly-released data from the state Education Department offers the first comprehensive view at just how many families pulled out of the public school system during a school year marred by pandemic restrictions and widespread remote instruction.

Earlier state data suggested public school enrollment in the Capital Region dropped about 3.5 percent this year, reaching its lowest overall level in at least 40 years, with the bulk of the dropoff the result of sliding kindergarten enrollment.

Some families may have deferred the start of school for kindergarten-aged children, but the homeschool data shows that many families also chose to take control over their children’s education during a moment of profound uncertainty around what public school would look like this year.

Homeschooling figures had been on the rise across the region for at least a decade, according to the state data, growing from around 1,700 students in the 2009-10 school year to about 2,400 students at the start of the 2019-2020 school year, the most homeschooled students the region had seen at the time. 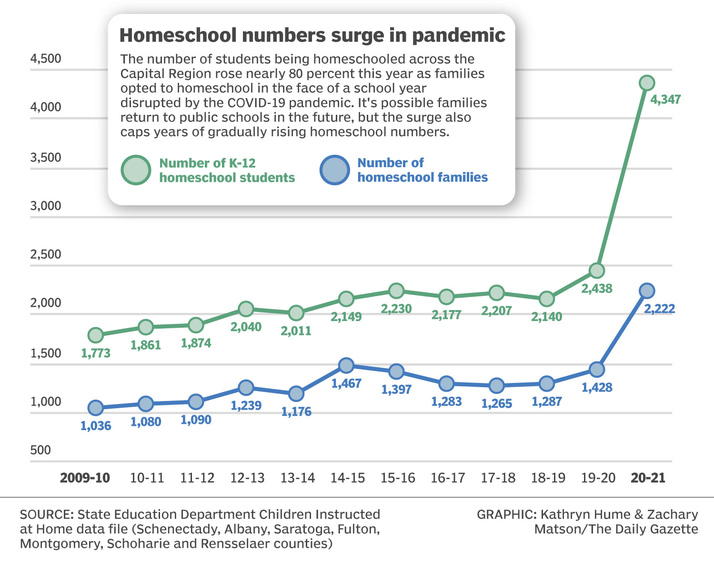 Kate Averett, a University at Albany sociologist whose new book The Homeschool Choice explores the personal stories of homeschool families in Texas, said she was not surprised to see an increase in families opting to homeschool in the face of uncertainty around how public schools would manage remote instruction and the safety precautions of a pandemic.

Averett, who conducted interviews with parents across the country in August about their thoughts regarding remote instruction and the upcoming school year, said families struggled with the immense stress of approaching the school year without knowing whether their kids would learn in person or remotely, what kind of protections would be in place and how they would be able to manage their children’s virtual learning.

“Even for those who knew how (the school year) was starting there was this giant question mark about what it would look like,” Averett said in a Thursday interview.

For some families, moving to homeschool would enable them to take control over their children’s schedules and activities and bypass the unanswered questions from school districts all together, though not every family was in a position to make that choice.

“With remote learning you are on the school’s schedule, expected to show up at a certain time, do things in a certain order, which when in person made a lot of sense, but when kids are learning from home that can be really tricky for parents,” Averett said. “With homeschooling, you get more control yourself, you get to set that agenda, you get to decide what you are learning on a certain day.” 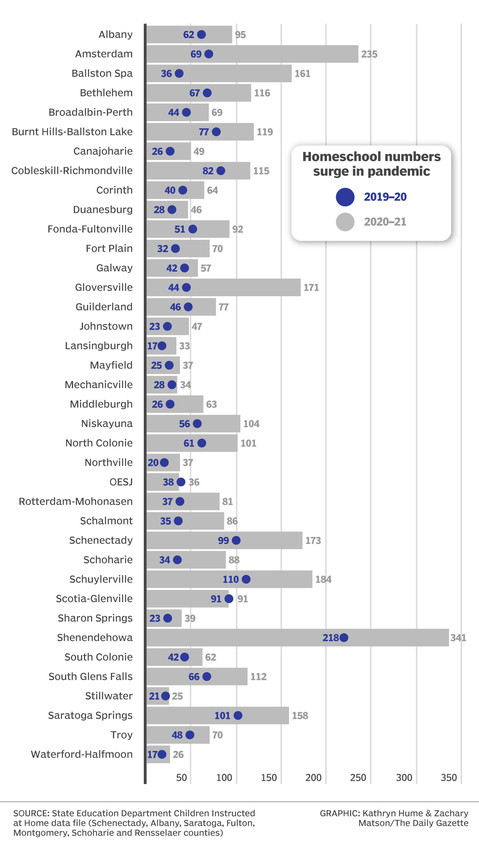 Averett said homeschooling has gradually increased in popularity in recent decades, following national efforts to legalize the practice in all 50 states. Her book, which just published, explores the different backstories of homeschool families, ranging from religious conservatives to progressives and families with LGBTQ students who don’t feel comfortable in the public school system. She said homeschooling has become a part of broader narratives around “school choice” and presents complex gender dynamics.

She said she expects to see at least some of the families who moved to homeschooling this year to return to their public schools next year as the disruptions of this school year begin to ease, noting that New York has some of the more complicated rules around homeschooling.

“My guess would be if this increase this year is largely driven by the particular situation of the pandemic, I would definitely expect at least a large chunk of those families to go back into the public schools,” she said.

The increases in families opting to homeschool ranged widely across the region, though most districts experienced an increase of some kind.

In Schenectady, where the number of homeschool students increased from 99 last year to 173 this year, interim Superintendent Aaron Bochniak said district officials plan to reach out to homeschool families to communicate the district’s plans for next school year. He also noted that homeschool families in New York have a lot of regulations and rules to keep up with, something not all families may want to commit to in the long run.

“There is a lot required of them, and I don’t know how sustainable that might be for families moving forward,” Bochniak said Thursday. “We are going to reach out and let people know what our plans are.”