Many in the village and throughout Montgomery County are hoping the proposed E29 Labs cannabis cultivation and manufacturing company project will be the job-creating catalyst needed to move forward and restore the customer base of so many of the village’s downtown businesses.

On Tuesday the Montgomery County Legislature approved a five-year purchase option agreement with 102 Church Street LLC, the real estate holding company for E29 Labs, a business that has proposed building a $15 million to $30 million cannabis cultivation operation on the eastern portion of the old Beech-Nut property.

E29 Labs projects it would hire 125 employees for Phase 1 of its three phase seven-year plan, at the end of which it could have as many as 500 employees. The company has also stated its workforce will be unionized.

“Having that many jobs in town definitely impacts the community, as far as I’m concerned you tend to shop where you work. I can see it making a big difference economically here,” said Janet Stanley, president of the Canajoharie-Palatine Bridge Chamber of Commerce. “Having jobs equals bodies downtown, and I just think it’s going to be huge for Canajoharie.”

Also Sunday: Bacon to baby food, Beech-Nut had a big impact in Canajoharie

Marcia Jaque, owner of Gino’s Restaurant at 49 Church St., said she relocated her family-run business from Sharon Springs to Canajoharie shortly before Beech-Nut closed. She took over the location of the former Church & Main Restaurant, but has always struggled to regain the level of business she had initially hoped would be possible for her downtown location.

“I was a little bit terrified,” she said of the Beech-Nut closure. “I was expecting we would, at least, have the Beech-Nut company employees, but then of course it dried up the town because everybody left. It killed it. There were no people in the streets. It hit hard, and the fact that it’s been shut down for so many years, so many broken promises of people coming in and supposedly purchasing it, and we would get excited because anything that is closed down is not good.

“When one big business goes down, the rest of the town’s businesses have to make up the difference,” she said. “Everything went up. We were responsible to balance out that bill, and it hurt.” 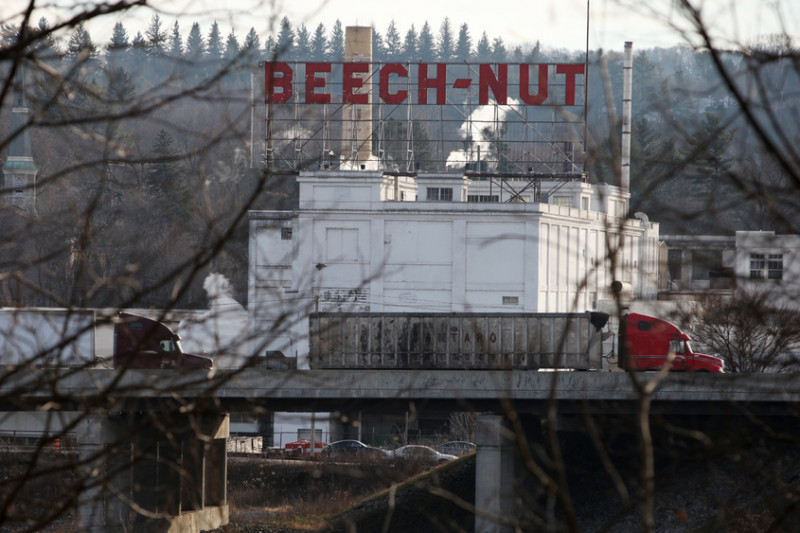 The Beech-Nut plant in Canajoharie is pictured alongside the New York State Thruway in 2010. FILE PHOTO

Doing business in Canajoharie for the past decade has been difficult, she said.

“It tested our will, but I’m 50 years old, am I going to start over doing something else?” she said. “I guess my momma taught me to ‘toughen up little girl.'”

The E29 Labs project has offered her some hope.

“One hundred percent, the amount of people who will be working there, this town will so flourish, just from the feeling that it isn’t a dead space being wasted,” she said.

Michele McGlone, the owner of the Emotional Outlet consignment shop, said her business directly faces the western office-space side of the former Beech-Nut plant. She started her business in 2011 at 36 Church St., and was later able to buy her current location at 89 Church St. in 2012, in part because the pizza business that had been located there shut down, she said, likely in part due to fewer customers after the plant closed.

McGlone said she’s only tangentially paid attention to the twists and turns of the ownership and development of the former Beech-Nut site, but she has watched what’s happened.

“It’s deteriorating,” she said. “The windows have been blowing out, regularly, and a lot of them have plywood in them. It’s really sad. They do maintain the grass. I’m used to it, because I look at it all day long, every day, but I imagine people driving through the town think it’s pretty run down, but I know this E29 Labs project won’t affect that part of the building.” 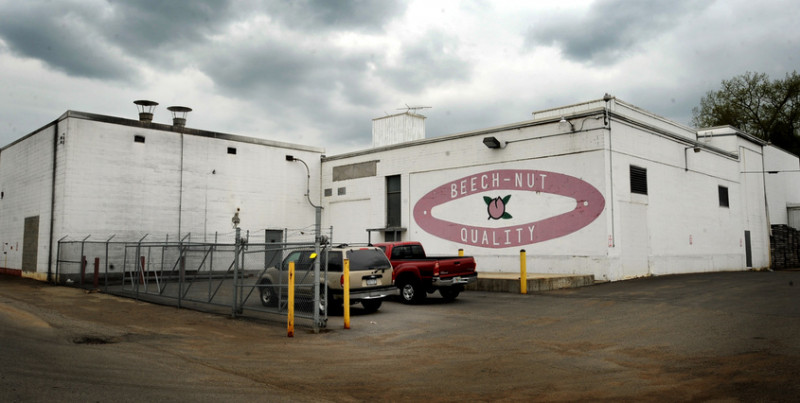 Irrespective of the fate of the E29 Labs project, Montgomery County will retain ownership of the western office-space portion of the old plant. Different proposals have been made for the space over the years, ranging from an idea to convert it into a consolidated town courthouse building serving the western part of Montgomery County, or possibly leveling the existing structure and building something new.

The idea of a downtown cannabis manufacturing plant is a concept so new Canajoharie Central School District Superintendent Nick Fitzgerald isn’t completely sure how educators will address it with students.

“I don’t know that answer yet, it’s something we’re going to have to sit down and talk about,” Fitzgerald said. “We’re supposed to be having a meeting with the owners and the county and that type of thing, once everything is kind of settled down, we’ll start to look at options.”

The Canajoharie Central School has approximately 900 students currently, but used to have closer to 1,100. Fitzgerald said a big new employer could help turn that around.

“We want to try to understand this organization as much as we can, and look to promote job growth and opportunities for students to stay in the community after they graduate,” he said.

E29 Labs plans to construct a cannabis cultivation and manufacturing facility on 19.6 acres of the Exit 29 site in Canajoharie. A provided rendering at right. Credit: Joshua Thomas and Provided

Janice Dillenbeck, director of the Canajoharie Youth Center, said her organization operates an after-school program for children from the ages of eight to 12, and has been in operation since the 1940s, when it first offered supervision for the children of Beech-Nut factory workers. She said she’s excited about the potential of the E29 Labs project, which she believes may involve some green park space.

“I think that would be great if it were accessible to the public. I would love to take the kids over and let them use the grounds, we don’t really have a place where we can do that currently,” she said.

Dillenbeck said she acknowledges that cannabis manufacturing and recreational marijuana products will be a thorny subject, and will likely be a topic her organization will prefer parents discuss with their children.

“If a child has a question about that, I feel we should say go home and ask your parents about it — I don’t feel it’s our place to talk about that,” she said.

Dillenbeck said her program currently has about 25 children, which swells to 75 for her summer youth program. She said more jobs in Canajoharie could mean more kids for the Youth Center.

“I think it would be great to have more people in the area,” she said. “It could definitely help.”

Also Sunday: Bacon to baby food, Beech-Nut had a big impact in Canajoharie