With 54.6% of all residents at least partly vaccinated against COVID-19 as of Friday morning, Schenectady County is fourth-highest among the state’s 62 counties on a key path to emerging from the pandemic.

But not all parts of the county are vaccinating at an equal rate.

Nationwide, the generalization has been that rural white Republicans and urban minority communities have been among the slowest to vaccinate, and the same pattern has developed in Schenectady County.

A ZIP code-based database provided by county Public Health Services indicates that only 36% of residents age 15 and older in the Hamilton Hill and Vale neighborhoods have received at least one dose of vaccine, compared with 73% in Niskayuna.

Hovering in the middle are the rural areas of southwest Schenectady County — Duanesburg, Princetown and Rotterdam, four ZIP codes that were in the high 40s Thursday morning.

The 13 ZIP codes cover almost all of Schenectady County and, in a few cases, spill over into neighboring counties.

The days where the county could set up a point of dispensing, or POD, and administer 500 doses in eight hours are gone, likely permanently, interim director of public health Keith Brown said Friday. The strategy now is smaller and mobile sites.

“The real challenge for us is reaching the people who want to get vaccinated” but haven’t for some reason, Brown said. “Then after that we’ll do what we can with the people who have problems with vaccine confidence, even the people who are dead-set against the vaccine.”

The county this past week expanded its house call program, which services those who can’t leave home and anyone else who happens to be present in the household and wants the shot.

“We’re also about to roll out a series of walk-in PODs, including the neighborhoods we’re talking about,” Brown said. 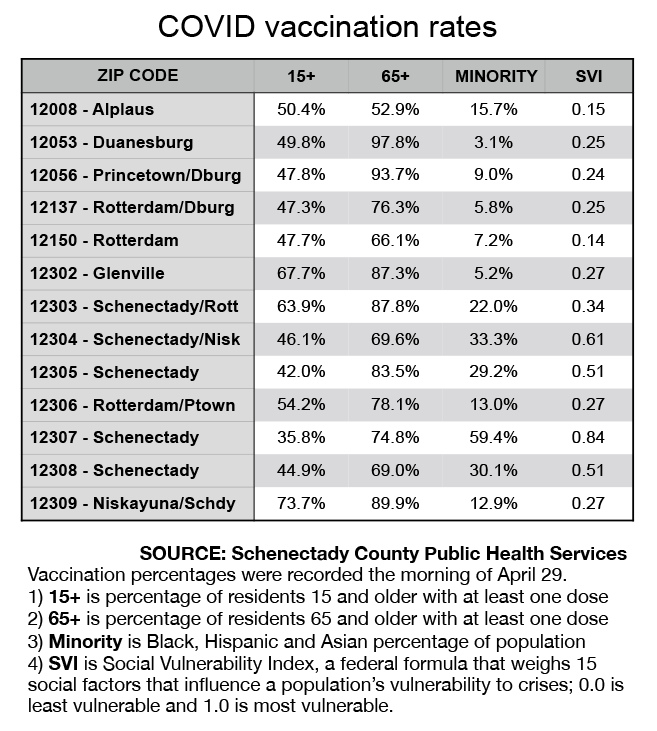 On-site and collaborative efforts with Christian, Hindu and Muslim faith communities also have proved effective, and will continue, Brown said.

Local and community leaders this week discussed the factors behind their high or low or average vaccination rates:

(Vaccination is open to those age 16 and older, but the closest Census age bracket is 15 and older.)

“I think many of the barriers we see are the perceptions,” Syed said. “Niskayuna residents by and large trust the science behind being vaccinated. I think that played a part as well.”

Glenville Town Supervisor Chris Koetzle said the town did not make a wholesale effort to boost the vaccination rate — a lot of the drive to vaccinate came from the residents themselves. One focused effort it did launch was on senior citizens.

Director of Human Services Vicki Hillis, who among her many hats is coordinator of the town Senior Center, began collecting contact information from seniors who wanted the vaccine, eventually building a list of 800 people before the shot was even available.

“She did one-on-one interaction,” Koetzle said.

Senior citizens, who’ve accounted for the bulk of the death toll amid the pandemic, were easy to convince, he said. Moving forward, the town will try to convince young adults to get vaccinated, but he expects that to be a tougher audience.

It’s a rural and semirural town — the city of Schenectady has 69 times more residents per square mile — and has suffered significantly fewer confirmed COVID infections per capita than the city.

Town Supervisor Roger Tidball said the town opted not to mount a specific vaccination campaign, given how widely the message already was being spread by other government entities and the news media.

He doesn’t think there’s a particularly strong anti-government or anti-vaccine sentiment among his constituents, and has heard only a little of both. A lot of people may just be waiting to get the shot, he said.

“I think it was just the community,” Tidball said. “We’re a large small town, I call it.”

Church groups ran buses to vaccination sites and people with cars gave rides to those who couldn’t drive. Pastors told Tidball that church groups have actively sought out members who were not vaccinated in an attempt to get them to roll up their sleeves.

There are a lot of close-knit groups within town, he said, and this was their natural reaction to the pandemic.

The federal government generates the Social Vulnerability Index, a metric that weighs 15 socioeconomic determinants in a geographic area to rank its vulnerability to crises. An SVI rating of 0.0 is least vulnerable, 1.0 is most vulnerable.

Schenectady City Councilwoman Marion Porterfield, a Hamilton Hill resident, said the county strategy — having known and trusted members of a community spread the message to that community — worked well with promoting testing and is the right strategy for promoting vaccination.

“That is the only thing that I can see that would make a difference,” she said.

“I think we have to work a bit harder maybe,” she added, saying that the effort seemed to taper off midwinter.

“In some communities you’re going to need people to have direct contact.”

The Rev. Nicolle Harris, pastor at Duryee AME Zion Church and president of the Schenectady Chapter of the NAACP, said race and the toxic legacy of racism are intertwined with the low vaccination rate so far in the Black community.

The state-run COVID vaccine online dashboard indicates Black residents make up 11.6% of Schenectady County residents age 15 and older but only 4.9% of the vaccine recipients in the county as of Friday.

“The hesitancy that I run into is people understanding the history of Black and brown communities with the medical community,” she said. “Recognizing it’s an issue is one of the first things we want to tackle.”

Harris agrees with the strategy of people of color reaching out to other people of color to spread the message — she does it herself, describing the after-effects she had from the vaccine to those who are worried rather than reading off a generic list of potential side effects.

“They want you to serve as ambassadors and I get that. I think it’s important,” Harris said.