Fulton & Saratoga Counties – Georgios Kakavelos, the owner of a Johnstown sandwich shop, not only called for the death of his employee Allyzibeth Lamont, but participated in her murder, Kakavelos’ one-time co-defendant, who admitted last week to murder in the case, told investigators early in their investigation.

In a statement to investigators days after Lamont’s disappearance, James A. Duffy contended Kakavelos told him he owed Lamont money and that “she was causing problems for him at the labor board,” the written Duffy statement filed in court and obtained by The Daily Gazette reads.

The statement went on to say the two then worked to plan the murder over the span of three days.

They then went through with it the evening of Oct. 28, 2019 at Kakavelos’ Local Substation No. 9, Duffy attacking the 22-year-old Gloversville resident with a baseball bat, Kakavelos with a garbage bag, the statement reads.

“George told me that when he goes back to where Ally was then, to get the bat and come and do it,” Duffy’s statement read.

Duffy said he did it. Kakavelos then joined in with the bag, Duffy’s statement read.

Duffy’s statement is dated Oct. 31, 2019. He gave it to investigators after he led them around the region to retrieve secreted key evidence in the case, including the baseball bat, and, ultimately, to Lamont’s body, buried in a shallow grave off Exit 13 in Malta.

Both Duffy, 35, of Johnstown, and Kakavelos, 52, of Milton, were arrested within days of the disappearance and discovery of Lamont’s body, and indicted early last year on charges that included first-degree murder. The murder count included the possibility of life in prison without parole, if convicted.

“They were very self-serving and, frankly, they just don’t line up with the evidence,” O’Brien said of Duffy’s statements.

Kakavelos maintains his innocence in the case, as he has from the start, O’Brien said.

“He’s been waiting in jail to tell his version of events, to put forward his defense, for nearly two years,” O’Brien said. “I’ve been with him throughout that process and he’s been steadfast in his position.”

Lamont was last seen alive that Monday, Oct. 28, 2019, at about 8 p.m. on Townsend Avenue near North Comrie Avenue in Johnstown, near where she worked at the Local Substation No. 9 sandwich shop in the Adirondack Plaza, authorities said at the start.

By the afternoon of Oct. 31, 2019, investigators had Duffy in for an interview as investigators still did not know Lamont’s whereabouts or whether she was alive or dead. 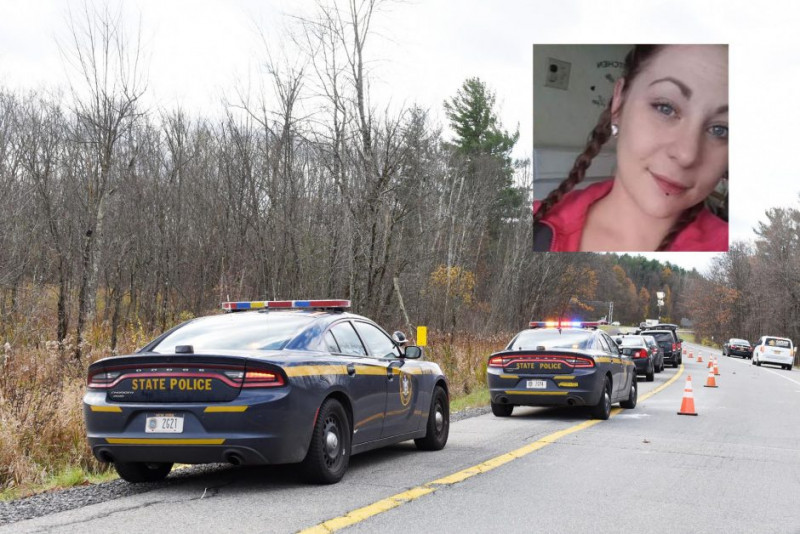 Eventually, Duffy agreed to go with investigators, lead them to evidence in the case and ultimately to Lamont’s body, according to the hearing testimony from state police Inv. Jason Nellis.

From the Gloversville Police Department, Duffy led them to Dean Lung Road in Galway.

“Once on Dean Lung Road, we proceeded north approximately three-quarters of a mile to a mile before Mr. Duffy advised us that on the left was a pond, like a marshy area,” Nellis testified at the hearing, according to a transcript. “He advised us that the murder weapon, the baseball bat used to strike Ms. Lamont was in the marshy area.”

He also led investigators to another nearby location and two bags that contained clothing evidence and shovels, according to the testimony.

Duffy then led investigators to Malta, near Exit 13 of the Northway, the onramp to the southbound lanes. That’s where Lamont was buried, Duffy told investigators, according to the testimony.

Duffy told investigators that there were sticks covering her burial site, according to the transcript.

After going to other locations for more evidence, they returned to the station and Duffy told investigators what he said happened.

According to Duffy’s statement, the plot began three days before they killed her, Oct. 25, 2019. He outlined the following account for police:

Duffy had worked for Kakavelos at the shop for about a year, working an estimated 70 hours each week.

Kakavelos picked Duffy up and told him “we had to tie up loose ends.” Duffy told investigators he didn’t initially know what Kakavelos meant. But the next day, Kakavelos expanded on it and told Duffy “he had to take Ally out.”

“George told me that he owed Ally money and that she was causing problems with the labor board so he had to take her out.”.

They talked about how. Duffy said he didn’t want to, but agreed. Kakavelos gave Duffy $800 on Oct. 25, $500 Oct. 26 and $300 on Oct. 27. The alleged payments appeared to be the basis for the first-degree murder charges – that Kakavelos paid Duffy to kill Lamont or assist him in killing her. They finalized the plan that Sunday. Duffy would use the bat. Kakavelos would use the bag, a large black contractor bag. They also made plans for the aftermath, to prevent evidence from being left behind, the statement read.

Duffy said he couldn’t go through with it that Sunday, Oct. 27, so they left for Gloversville for Duffy to get some drugs, his statement reads.

They spent that Monday unloading shelves and picking up an oven. Duffy started drinking on the way back and Kakavelos “was saying we had to do it today.”.

Kakavelos told Duffy to bring extra clothes. Duffy ordered some crack cocaine. He received it and he and Kakavelos went back to the shop.

By 7:15 p.m., the shop closed and a neighboring store also closed; Kakavelos asked Lamont to go back and do dishes. The plan was that when Kakavelos went back there, Duffy would attack Lamont with the bat.

An autopsy showed she died of multiple blunt force trauma to the head, state police have said.

After killing Lamont, they put her body in Kakavelos’ car and looked “for a place to get rid of her,” Duffy’s statement reads.

Kakavelos brought fertilizer, cement and shovels, Duffy told investigators. They drove to around midnight and ended up at the Exit 13 I-87 onramp. No traffic, they pulled over and put the car hood up.

Duffy said they left her body in the woods and returned the next evening after dark and buried her in a shallow grave, under fertilizer, cement and some sticks. They continued discarding or moving evidence until sometime that Wednesday, Oct. 30, he told police.

“Then we went down to the hoagie shop and the police were there and took us to the station,” Duffy’s statement reads.