SARATOGA SPRINGS — Michael Dubb remembers being new to thoroughbred racing more than 20 years ago and hearing from Hall of Fame jockey Jerry Bailey about the conditions for the children of the backstretch workers who work long hours behind the scenes at race tracks.

“The children of backstretch workers were sleeping in cars, and being cared for by older siblings who were 8 or 10 years old,” Dubb recalled on Wednesday. “We knew something had to be done.”

Dubb, a Long Island-based builder by trade, began pursuing plans for the Belmont Child Care Association center at the Belmont race track, and that in turn planted the seeds for Faith’s House, the new childcare center that will open this summer at Saratoga Race Course. The 4,300-square-foot building is complete, though it won’t open until the bulk of track workers arrive for the 2021 summer meet in July.

The facility’s name, Faith’s House, honors of Dubb’s mother. Dubb and his wife, Lee, paid the entire cost of the project privately. 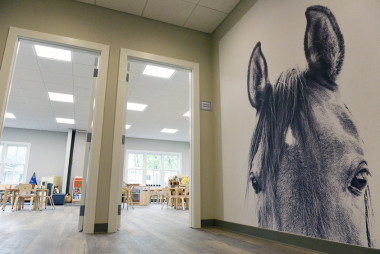 ERICA MILLER/THE DAILY GAZETTE
The new center is located within sight of Union Avenue on the Oklahoma training track side of the New York Racing Association property, and blends in with the neighboring recreation building, barns and other surrounding buildings.

“It was absolutely old Saratoga I was going for in the look, to make it look like it had been here for 100 years, but its state-of-the-art on the inside,” Dubb said. The one-story building was designed by Frost Hurff Architects of Saratoga Springs.

The childcare center has three main rooms, with children split up by age group. There’s a room for 6 weeks old through 18 months, a toddler room, and a larger room for children ages 3 to 5. Each room has its sink and refrigerator and napping areas, as well as age-customized bathroom fixtures. Meals will be catered and not cooked on site, said Libby Imperio, president of the Belmont Child Care Association.

There is also a fenced outdoor play area. The childcare will be provided by Bright Horizons, which operates early childhood education programs across the country. 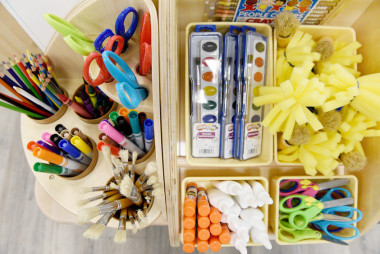 Dubb, who owns numerous thoroughbreds and is a member of the NYRA Board of Directors, said the settings in both Belmont and Saratoga Springs will give enrolled children a chance to learn English – English being a second language in many backstretch families – and to develop motor skills and other skills they will need when entering kindergarten.

The facility can accommodate up to 35 children. There are 13 children already enrolled, but Imperio said she expects enrollment to grow as word spreads within the track worker community. The Saratoga meet, which starts July 15 and runs through Labor Day, draws trainers and backstretch workers not just from Belmont, but from Kentucky, Florida, and other thoroughbred racing states. 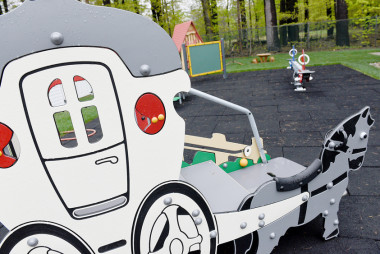 While some workers are already on site, the influx of 950 workers comes when the meet starts, and that’s when child care is needed, NYRA officials said. The facility will open at 5 a.m., recognizing the early-morning hours of many who work at the track.

“It will provide affordable and reliable child care on a schedule that meets their needs,” said NYRA President and CEO Dave O’Rourke, who spoke at Wednesday’s event.

“The backstretch workers who are integral to the sport of racing have long-needed the childcare services and support that will be provided by Faith’s House so that their families can join them in Saratoga for the summer meet,” said state Assemblywoman Carrie Woerner, D-Round Lake.

The track, which ran without fans last year because of the COVID-19 pandemic, is expected to host fans this summer, though most likely with limitations intended to protect public health.