A recent schoolwide email at Schenectady High School suggesting educators refer to the actions of the Israeli government as “ethnic cleansing” and “colonialism” stirred concerns among staff and the broader Jewish community that school leaders were backing a “one-sided” view of the complex Middle Eastern conflict.

The email sent by the school’s “culturally-responsive committee,” which works to advance the school’s anti-racism and equity goals, offered staff across the school buildings resources on the Palestinian perspective and included a list of “words to use” in class when discussing the ongoing violence in the Middle East.

“As we continue in our anti-racism journey, it is important to bring attention to the injustices that have escalated against Palestinians in recent weeks,” said the May 20 email, which the Daily Gazette has obtained.

The email passed along a chart urging educators to “use the correct terminology” when teaching about current events in Israel, where a recent ceasefire brought weeks of violence to an end. The chart listed “words not to use” and “words to use” when talking about the Israeli-Palestinian conflict.

The “words to use” list included: apartheid, colonialism, ethnic cleansing, boycott Israel, and anti-Zionism. “Words not to use” included: ‘clash, war, both sides and conflict.”

The email drew almost immediate backlash among teachers, particularly social studies and Jewish educators, who thought the email lacked the necessary nuance and failed to represent the Israeli point of view.

Rabbi Matt Cutler of Congregation Gates of Heaven said he heard from teachers at the high school and families in the district disturbed by the communication and concerned it represented a lack of understanding of Israel and its position in the Jewish faith. He said words like “ethnic cleansing” carry especially strong meaning for Jewish people who trace so much of their modern history to the Holocaust.

“We are the people of the Holocaust and to say we are involved in ethnic cleansing is nothing farther from the truth than it can be,” Cutler said in a recent interview. “The bottom line is it’s a phrase that elicits incredible pain in a people that have survived a genocide, and it’s not accurate.”

By 8 p.m. May 20, the day the email went to staff, high school Principal Chris Chank messaged staff that the email had “generated a number of responses and concerns” and invited staff to discuss it further with him if they wanted.

Administrators in the district last week continued to attempt to defuse tension over the communication, hosting multiple meetings with staff as well as meeting with Jewish leaders, like Cutler, in the broader community.

Chank also passed along a follow-up email from the culturally-responsive committee that sought to clarify the intent of the original message, noting part of the committee’s role is “to provide space to uplift oppressed voices.”

“The CRC’s critique of state-sanctioned violence is never intended to give either implicit or explicit condemnation of a religion,” the committee wrote in its follow-up message. “Any antisemitic ideologies should be given no quarter in our community or in our committee. We are deeply sorry for the harm that we caused by not making that more clear.”

But not all teachers were satisfied with those efforts, arguing administrators still failed to acknowledge that the original email offered a one-sided view that could offend many Jewish people and did not capture the complexity of the situation in the Middle East.

Chris Ognibene, a longtime social studies teacher at Schenectady High School, said he thought the original message positioned the school as taking a particular side in the conflict and did not account for how social studies teachers have approached the topic by exposing students to both Israeli and Palestinian perspectives in an effort to push students to think through the complexities of the conflict to make their own judgments.

“As educators, it’s our job to help students learn how to think about this conflict. We cannot teach them what to think about it,” Ognibene said. “When the school takes a single side and offers it as the only point of view we do students a grave disservice.”

Ognibene said he teaches students both that Jewish people have long been connected by strong religious and historical ties to the Land of Israel and that “Palestinians, too, have rights in their homeland, including the right to self-determination and the establishment of a sovereign state alongside Israel.”

“We’ve always taught it with both perspectives and nobody took a side,” he said.

Mike Silvestri, a high school social studies teacher and the vice president of the Schenectady Federation of Teachers, said he thought there was a failure of leadership after administrators did not quickly respond to the initial message with a strong statement of understanding the nuances of the conflict. He said school leaders should ensure that schoolwide messages don’t create the sense the school is taking a particular position in a conflict.

“I don’t know why it was hard to do it right away,” he said of a leadership response clarifying the school and district position. “The email was a mistake but the lack of leadership was a problem.”

Patrick Jean-Pierre, District Director for Equity, Diversity and Inclusion, responded to a request for comment on Saturday with the following: “SCSD stands with our Jewish brothers and sisters everywhere and against all injustice anywhere. Our goal is to continue to use this recent experience in the same way we have used all experiences, as an opportunity for learning and growth for all. We are having ongoing conversations across the district, working with community members like Rabbi Cutler and collaborating with all stakeholders to refine our processes to minimize harm for all groups.  We stand with all oppressed people everywhere and work with others to build bridges and break down barriers to unity.”

Some people, though, think that schools should do a better job of describing the plight of Palestinians, who have long been displaced from their homelands and treated as second-class citizens.

Shaik Ubaid, an anti-war activist whose group the Muslim Peace Coalition organized a recent pro-Palestinian rally in Albany, said he thinks some of the phrases and words used in the chart are an accurate description of the way Arab minorities are treated in Israel and Palestine.

He highlighted how Palestinians were displaced from their homes by Jewish settlers at the creation of Israel as its own country – which flowed from the aftermath of WWII – and how that displacement continues today.

“Why is it anti-semitic to describe how European Jews came to Palestine? It is colonization,” he said. “When you look at it objectively, the Palestinians and the world see it as white people from Europe coming and taking it over.”

While he said he did not think “ethnic cleansing” was an accurate description of current events, he did cite historical events he felt did fit the definition of the term. He also highlighted how the United Nations and many other countries have taken strong positions against the action of the Israeli government, noting how Nelson Mandela, who battled apartheid in his home of South Africa, has stood in solidarity with the Palestinian cause.

He said American history is full of examples of how language has evolved as people have recognized past atrocities, noting that Native Americans were once called “savages.”

“We have to talk about history in a very objective and truthful manner, so it does not get repeated,” said Ubaid, who worked as a physician at Ellis Hospital in the mid-2000s and now lives in Loudonville.

In the past week, Cutler joined with Rabbi Rafi Spitzer of Congregation Agudat Achim, Rev. Dustin Wright of Messiah Lutheran Church in Rotterdam, Rev. Amaury Tanon-Santos of SICM, and Jamaica Miles of All of Us to discuss how to build a constructive dialogue on Israeli-Palestine issues moving forward.

Miles said the aim of the conversation, which was organized with the help of Schenectady Clergy Against Hate, was to foster ongoing discourse on a topic that can often devolve into fights with no progress.

“In the media and in communities there are conversations that can be heightened and too often differing opinions don’t come together for conversations,” Miles said. “What’s happening in Israel and Palestine is in need of a conversation because there are both communities here in our school district and there are cultures that do not know or understand each other.”

Cutler said he and Spitzer plan to meet with the high school’s culturally-responsive committee at some point in the future to bring more information to the conversation and help explain how criticisms of the Israeli government can get turned into criticism of Jewish people. 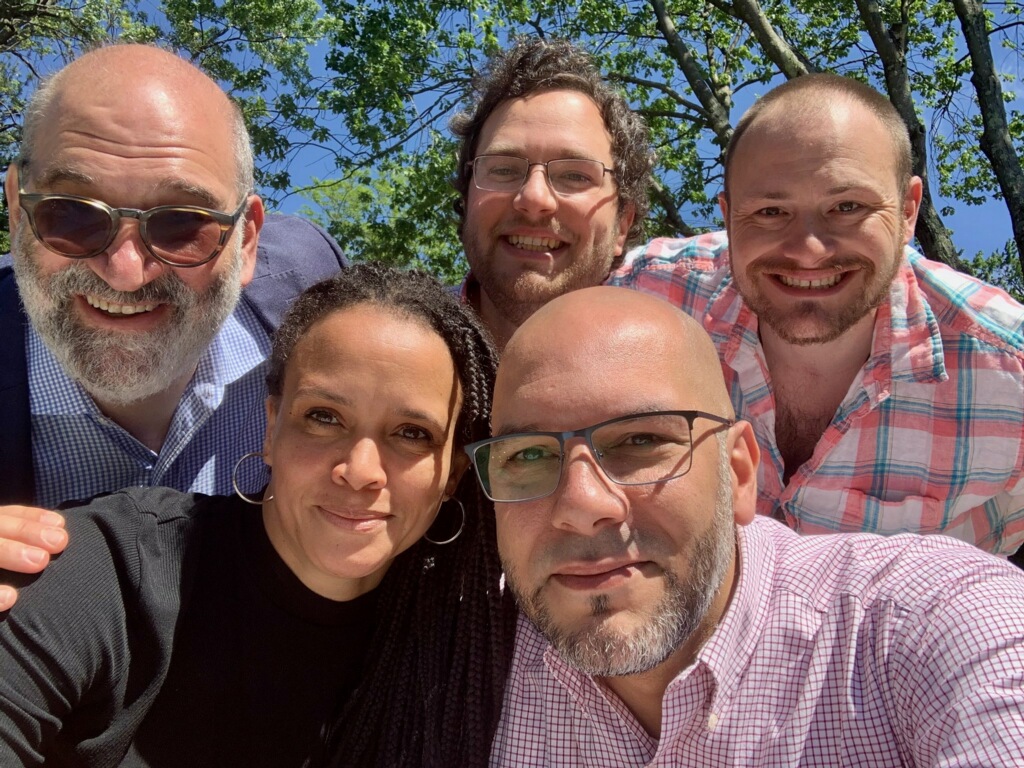 Cutler, who has traveled to Israel and Palestine over the years, said it’s important that people understand that there aren’t monolithic Israeli and Palestinian perspectives on the conflict but rather broad spectrums of views from all people involved. He said “there are heartbreaks and anger running deep in both the Palestinian community and Israeli community” and that both need to be heard and acknowledged. Israel, he said, “has a right to survive and thrive” and that Palestinians need a sovereign and peaceful homeland.

“We cannot be playing ‘whose suffering is worse.’ We have to stop looking at this as competitive liberations and start looking at them as complementary liberations,” Cutler said. “This is a far more complex issue than an email to faculty can capture, and that’s the essence of the struggle of what needs to be educated with the (culturally responsive- committee) and within our schools.”

“Patrick Jean-Pierre, District Director for Equity, Diversity and Inclusion, responded to a request for comment on Saturday with the following: ‘SCSD stands with our Jewish brothers and sisters everywhere and against all injustice anywhere.'”

Thank you DG and Mr. Jean-Pierre for standing up for the poor beleaguered Jews in Israel and all the suffering they’ve undergone.
And if you think that’s sarcasm, you’d be right.

We can talk about “Two State Solutions” but it doesn’t take a high schooler to see the disparity, and preference, and fealty the United States gives to Israel. To suggest any sincere concern for the Palestinians’ welfare is an insult to the clear-headed. Perhaps Mr. Biden can now see that after the latest Israeli atrocities.

And with regard to the ascendancy of Hamas and their assaults on Israel, what did you expect after the oppression they’ve been under? If you beat a dog enough he’s likely to hate you. The Zionists of Israel have shown over and over again they have no interest in the Palestinians’ welfare, or even their existence.
The irony is real, and stunning.

As a 30 year higher-ed educator, I can’t tell you how offended I would be should I have received such a directive from a related “Equity, Diversity and Inclusion” initiative at my employer. The CRC should tread lightly realizing that the polarizing impacts of their agenda create outcomes counterproductive to their goals.

Although I am a supporter, with criticism, of Israel, what bothers me most about the directive sent out is the Orwellian use of the terms “words to use” and “words not to use” , not that the words I don’t like might be used. I actually think it’s good to discuss claims of apartheid or colonialism against Israel to help clarify these charged words and allow students to hear different perspectives, but discussion of “conflict” or “both sides” between Hamas or Palestinians and Israel is forbidden? Good job Chris O. and other social studies for allowing students to hear multiple viewpoints…otherwise known as learning.

District Director for Equity, Diversity and Inclusion? It seems like anytime we have these groups like the one above they turn out to be the most racist of all. Stop, why would a school district employee people like this to begin with. All they are doing is pushing a racial divide not a racial inclusivity.