SCHENECTADY — The Central Park pool has long been a popular destination, but the facility’s location has attracted a number of unwanted guests over the years.

Geese inhabiting nearby Iroquois Lake have defaced the facility with droppings. Clean-up is especially difficult since the pool lacks a proper filtration system and must be drained and refilled on a daily basis.

The pool no longer meets standards laid out by the state’s Department of Health, according to Mayor Gary McCarthy, which is why the city is now seeking to relocate the beloved summer destination to a more central location in the park — and away from the messy geese.

“It just doesn’t meet state standards for filtration and other things, so we began looking at what the options were for the current facility, or to do an upgrade in a new facility,” he said.

City Council members on Monday got their first glimpse of an estimated $3 million plan to relocate the pool to where the defunct tennis stadium stands. The stadium, which once hosted professional events, has been dormant for years with no plans in place to rehab the facility.

Daniel Shearer, a principal engineer with Saratoga Associates, a design firm the city contracted to draft design plans for the new pool, said the location will allow the city to easily connect the pool with other amenities in the park like Music Haven and the nearby tennis courts. The location also offers ample shade and the ability to add additional amenities in the future. 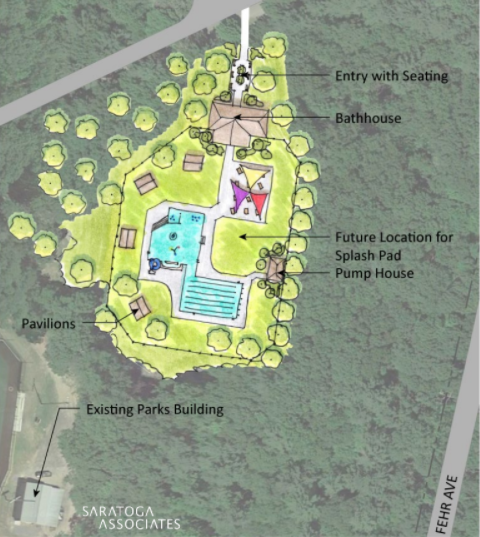 The City Council on Monday got its first glimpse of an estimated $3 million proposal to relocate the Central Park pool to an area of the park where the old tennis stadium stands. Plans call for a “Z-shaped” pool complete with swimming plans, a general-use area and a child’s play area with depths ranging from 0 – to 18-inches. A bathhouse, picnic area and seating area are also included in the plans.

He compared the current pool to a pond and said it would cost the city between $8 and $10 million to bring up to state standards.

“Cleaning up that waste isn’t that easy, Shearer said. “It’s a health and safety hazard, quite frankly.”

Plans call for a “Z”-shaped pool complete with swimming lanes, a general-use area and a play area for children that would range from 0- to 18-inches deep. A bathhouse, picnic pavilion and seating area are also included in the plans.

The plans also feature a long-range concept for the site, including a 72-space parking lot, a splash pad and lighted trails, though it’s unclear if the city would act on those plans.

Shearer said the plan is to solicit input from stakeholders and break ground sometime in the spring of 2023.

“We want this to be something the community can use and enjoy,” he said.

McCarthy said the city is looking to use a portion of the $53 million received under the American Rescue Plan Act to pay for the costs of relocating the pool.

“This seems to help deal with some of the equity issues, it deals with health and safety, and it compliments some of the other investments that we’ve made in the parking at Music Haven, A Diamond and the tennis courts,” he said.

McCarthy said the city will hold meetings with the Boys & Girls Club, the city’s school district, neighborhood associations and other stakeholders sometime in the near future.

“We’re looking to move forward on it but the concept is still somewhat preliminary,” he said. “We’re looking for public input in terms of what people think.”

There is a plan for an indoor aquatics center already. There should be an article on if we really need this or if those projects should be combined. It should have been brought up in the article.

Also no mention of geese mitigation at the new pool and how they would make sure the geese don’t poop in the brand new pool.

The gazette definitely blurs the line between journalism and press release newswire. Well I don’t see you crossing the line, this is a press release.

Newsflash, geese fly, and geese will see the new pool just like they see the old pool. When they are flying overhead they are only looking for water not lakes.

What I understand is geese like to come in to water on a low flying angle and this location will make that more difficult since they will have to come in on more of q dive pattern something they do not like to do. Of more importance what will be flying overhead for sure is foul balls from the Buck Ewing Field/ A Diamond. If this plan comes to fruition a cantilevered “Hood” must be installed on top of the backstop fence to prevent someone being unintentionally beaned by a foul pop up. Hopefully the engineers are aware of this and the overhang will be included in the plans.