SCHENECTADY — A Rotterdam couple has opened a business devoted to the hobby and sport of ax-throwing in Schenectady’s Crosstown Commons.

It’s one of five such venues in the region, but the first in Schenectady.

The Axe Lounge lives up to its name by adding comfortable sofas near the throwing lanes but well out of the flight path.

Jace Patrick and Samantha Ng have been working on it for months, but the pandemic pushed back their targeted September opening date.

“We were thinking by now COVID would be winding down,” Patrick admits.

Patrick is a Cambridge native who joined the Navy right out of high school and earned a psychology degree after a four-year stint. His career moved toward sales instead of psychology, and sales took a hit amid the pandemic.

The Axe Lounge is a full-time pursuit for Patrick but Ng retains her day job as a CVS pharmacy technician and a sideline as a L’Oreal sales rep.

They got an unlikely introduction to flying axes on a trip to Vermont.

“It was axidental,” Patrick said. “She signed up for a go-kart place, it made her motion sick. They also had ax-throwing there.”

“I begged him to go ax-throwing,” Ng said.

“And that’s how she roped me into throwing for the first time,” Patrick said. “I really enjoyed it.”

He built most of the wooden features within The Axe Lounge as the business went through the paces of preparing to open. 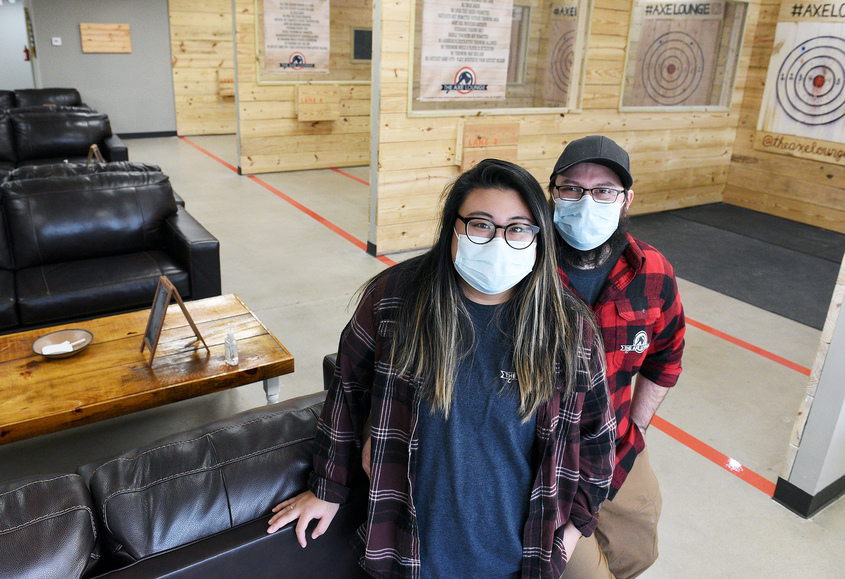 Samantha Ng and Jace Patrick, co-owners of The Axe Lounge at Crosstown Plaza in Schenectady, pose in their new business Tuesday, Dec. 21, 2021.

First-timers get a full safety briefing. The hatchet-sized axes on hand are not razor-sharp but they can cause injury if misused. The throwing lanes are designed to keep errant axes from going too far off course and a rubber mat on the floor robs falling axes of their momentum.

Even after only a few days, the wall and even the floor surrounding the targets are pockmarked with slits from near-misses.

Children must be at least 10 years old and physically big and strong enough to throw under control if they want to participate.

Also, the couple sticks with hatchets rather than long-handled axes because of space limitations.

“We’re not allowing big ax just because of the height of our ceiling,” Patrick said.

One-handed or two-handed throws are allowed. Ng and Patrick give pointers on both.

All else being equal, Patrick says, two-handed is more likely to sink into the target but one-handed is easier to aim.

He talks a first-timer through the two-handed throw.

“Wide stance, kind of athletic, bend your knees,” he told a Gazette staffer. “Bring it back over your head and when it comes into your field of view, that’s when you let it go.”

The first two Gazette throws sink into the wooden target with a satisfying THUNK and surprising accuracy, a bit of beginner’s luck of the kind that attracts newcomers to the sport.

The next three make a good test of the safety features, bouncing off the target or missing it altogether.