Nearly two years into the pandemic and nearly one year after COVID vaccines became widely available, the risk of death remains much greater for unvaccinated Americans.

The federal Centers for Disease Control placed the risk at 14 times higher as recently as October, before the current surge of the apparently more transmissible but less deadly omicron variant began.

Such a correlation exists along the Mohawk River, where Herkimer, Montgomery and Oneida counties have among the highest positive test and death rates per-capita in New York, and Albany, Saratoga and Schenectady counties in the immediate Capital Region have far lower rates.

The counties in the east have among the highest vaccination rates in the state while the counties to the west, in the Mohawk Valley, have far lower rates.

Add Rensselaer County to the east and Fulton County to the west, and there’s a contiguous eight-county block with a stark east-west split.

Asked about the split this week, the four Capital Region counties gave variations on the same answer: An aggressive public health effort and access to the medical system has been hugely helpful.

“I think counties that have support for public health through local government and other avenues are better set up for success,” said Albany County Health Commissioner Dr. Elizabeth Whalen.

“I believe in Albany County we are lucky to have that support, and also to have a robust network of medical providers who are committed to working together to increase both vaccine uptake and education on best strategies to prevent severe illness and death.”

All this effort, she said, “likely informs public behavior, which is arguably the most significant driver of infection, and protective practices such as vaccination and community mitigation strategies including masking.”

As of Wednesday, Albany County had the 12th highest rate of full vaccination among the state’s 62 counties, the 17th lowest per-capita rate of deaths and the 15th lowest rate of positive tests.

At the west end of the Mohawk Valley, Oneida County Executive Anthony Picente Jr. said Friday that his county, which includes Utica, is suffering the effects of too little vaccination in the past year and too many underlying risk factors that long predate the pandemic.

This is an important point: The four Mohawk Valley counties are all significantly different from the four Capital Region counties, and factors besides vaccination likely have worsened COVID’s impact on them.

Compared with the four counties in the east end of the block, the western four counties all have higher percentages of residents who are elderly, disabled or living in poverty, U.S. Census data show. All four also have lower median household income, per-capita income and population density.

All four counties in the west lost population from 2010 to 2020, while all four in the east gained population.

The east-west divide on some of the metrics is fairly large.

“When looking at the state of COVID-19 across New York, I believe it’s clear that the higher a county’s vaccination rate is, the less positive cases and deaths occur over time,” Picente said. “That’s why here in Oneida County, we are focused on increasing vaccination and booster rates in order to drive down infections and deaths, especially in our urban and rural areas in which higher poverty rates result in negative health outcomes.”

Oneida County has lost 709 of its residents to COVID, by far the largest number of any of the eight counties.

Tomoko Udo, associate professor of public health at the University at Albany, said vaccination is key but the demographic differences that Picente cites also have a significant impact on the damage COVID inflicts on a community.

“Aging absolutely,” Udo said. “One of the most significant factors is age. Hospital and death rates rise with age, so that definitely makes sense.”

The public health community calls these nonmedical factors “social determinants of health” — living in poverty or farther from a hospital or dispersed beyond the easy reach of social workers does not necessarily cause health problems but can make health problems harder to prevent or treat. A population with poorer baseline health is more vulnerable when a pandemic hits.

The Census data show that some of these factors exist in the four Mohawk Valley counties.

“Throughout the pandemic, again and again we see that disparity,” Udo said, “It could be race, it could just be economic. It could be anything, not just COVID. Social determinants of health — poverty, environmental factors, access to hospitals and test sites — those affect the health status of the community. Those have been known for years. So it’s not surprising that we find it in COVID.”

As of Wednesday, Montgomery County had the 37th lowest vaccination rate in the state, the 16th highest positive test rate per capita and the highest death rate.

Montgomery County officials did not return a request for comment for this story.

Sharp-eyed observers will no doubt spot the fickle variations in COVID statistics.

Montgomery County has a higher vaccination rate than the majority of New York counties but also has the highest per-capita death rate of all. And three-quarters of its resident deaths came in 2021, when the vaccine was available.

Meanwhile, neighboring Schenectady County has the 28th and 27th lowest positive test and death rates per capita, putting it close to the middle of New York’s 62 states, but it’s right near the top in vaccination: 4th highest.

Regardless of the social determinants, vaccination and public health outreach factors, the pandemic has had an ebb and flow that doesn’t reach everywhere at once or equally.

Why does the virus hit one area harder than another? “Those are harder questions to answer,” Schenectady County Manager Rory Fluman said.

Why are some counties’ responses more effective? “Some of the answers are simple,” he said. “If you weren’t targeting your lower-index people, you’re not going to get as good outcomes.”

Schenectady County reached out aggressively to immunocompromised people and vulnerable communities, Fluman said, and it used faces familiar to those communities to do the outreach. There were many, he said, but he singled out two members of the Schenectady City Council.

All of this would be harder in a rural community, Fluman suspects. Schenectady County has the advantage of most of its population being packed together in a relatively tight core. And in its rural areas there’s a significant population of former urban residents who have enough money to get themselves help if they need it. 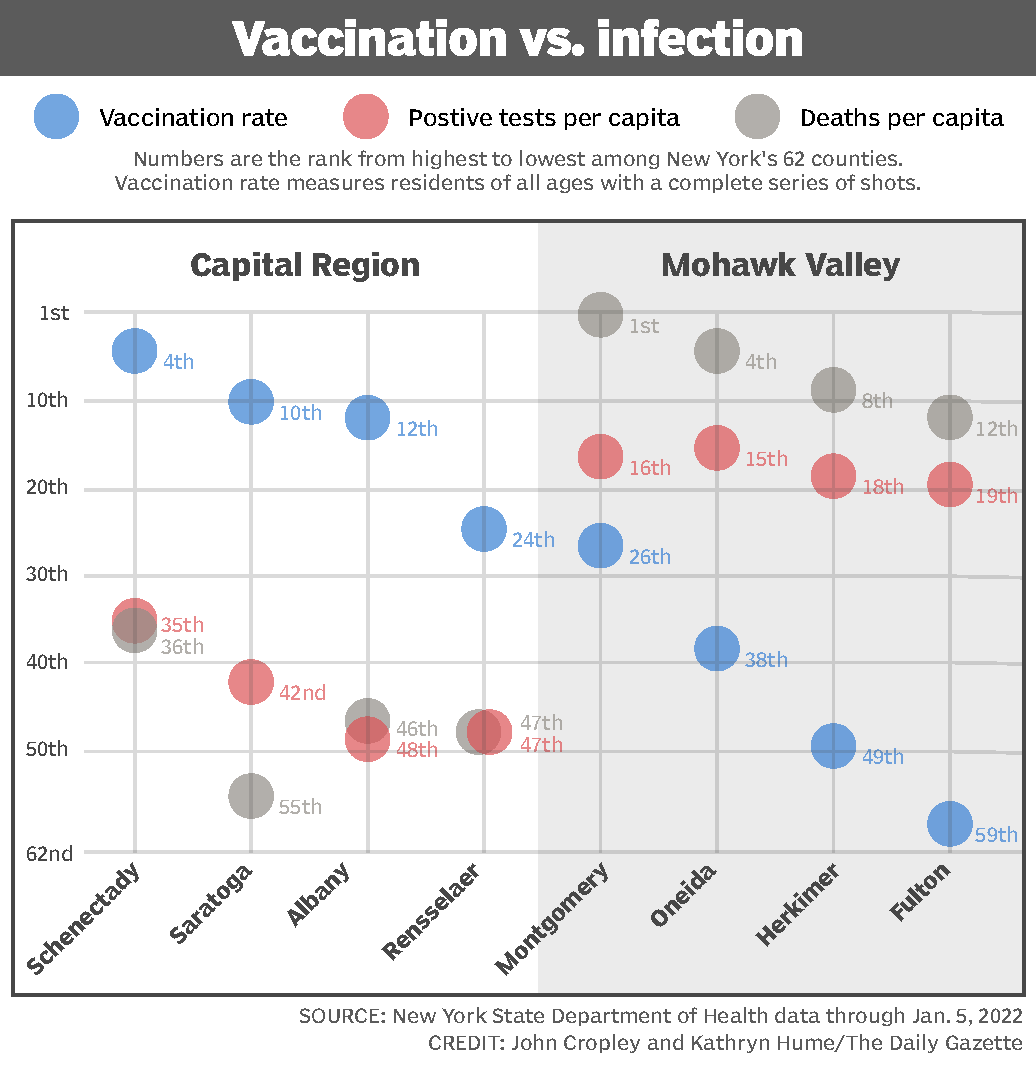 Herkimer County has the 14th lowest vaccination rate, the 18th highest number of positive tests per capita and the eighth highest death rate per capita among New York’s 62 counties.

Herkimer County officials did not return a request for comment for this story.

At the start of 2022, Saratoga County shows an optimal split: One of the highest vaccination rates in the state and one of the lowest death rates.

As a group, its residents are substantially wealthier than those of the other seven counties and they have the highest percentage of health insurance coverage. They also live in an area well-served by medical practices and hospitals.

The county’s rate of positive tests is low but not among the lowest in the state, and community factors were likely important in limiting the death rate, said Saratoga County Public Health Commissioner Dr. Daniel Kuhles.

“Death rates are impacted by several things,” he said via email. “Booster vaccination status is most critical, but also one’s overall health status, access to care, access to COVID Rx [for example, monoclonal antibodies and antivirals]. How soon an infected person gets to a doctor, hospital or other health care facility for treatment, what hospital to go to and the hospital capacity are all factors.”

Kuhles added: “Older and sicker communities, and those with lower booster vaccination rates, are also contributing factors to case rates and death rates.”

The age and infirmity that Kuhles mentioned were a factor in the high rate of nursing home deaths statewide in 2020. One after another, these buildings full of frail elderly living in close proximity were the scene of dozens or even scores of deaths.

All four of the Mohawk Valley counties cited here have a greater percentage of elderly residents and all four have had proportionally higher numbers of nursing home deaths than the four Capital Region counties.

Fulton County’s 47 nursing home deaths are the fewest among the four Mohawk Valley counties but still more than Schenectady County and Saratoga County, which have triple and quadruple Fulton County’s population.

Officials in Fulton County, which has one of the lowest vaccination rates in the state, did not return a request for comment for this story.

Fulton County has the 4th lowest vaccination rate, the 19th highest number of positives per capita and the 12th highest death rate among New York’s 62 counties.

Rensselaer County Public Health Director Maryfran Wachunas said her county’s strategy was to stay as close to the ground as possible.

It did its own contact tracing to slow the spread, relied on school districts to monitor their students and had help from a battalion of 80 regular and 900 occasional volunteers.

“The Medical Reserve Corps did a great job,” Wachunas said Friday. “They did everything — hotline, data input, PODs, screening, tracing. If we did not have them we would be in trouble.”

“We felt from the very beginning, boots on the ground, we know the connections,” she said. “There’s so many variables it’s hard to say exactly what made a difference.

“I think we really did a good job trying to contain it,” Wachunas said, adding a caveat: “Not now — it’s out of control — but before.”

Are there ways for communities to reduce the impact of COVID so far along in the pandemic?

Udo, the UAlbany public health professor, says there are still steps that can be taken, but also reasons why those steps likely won’t be taken.

“Obviously mask-wearing,” she said, but added: “A lot of people who don’t believe in vaccine tend to be resistant to other measures.

“I understand a certain percentage of the population still doesn’t believe in the pandemic or the severity of COVID. I don’t know what we can do about that in the middle of the pandemic.”

Even so, the public education effort can’t stop, she said.

Udo said some factors that could make a difference are increased availability of home test kits, improved access to medical care, more widespread vaccine and testing sites, and the arrival of new medical therapies that promise to help people sick with COVID get better instead of suffering worsening symptoms.

People, particularly those who are fully vaccinated, have a tendency to relax their protective measures, she said.

As a result, especially in the second year of the pandemic, small group gatherings have proved a greater threat of transmission than large settings such as schools or supermarkets, Udo said.

“That’s the reason we see holiday surges one after the other.”

As of midnight Thursday, 14.04 million New Yorkers had been fully vaccinated, 4.96 million booster shots had been administered, 3.97 million COVID tests had been lab-confirmed in New York and 61,859 deaths statewide were attributed to the virus.

Also Thursday, for the 240,000th time since March 2020, a COVID patient recovered sufficiently to be discharged from a New York hospital.

(ahem)
“putting it close to the middle of New York’s 62 states,”

Excellent analysis and very interesting. Thanks.

Get Exercise, Eat Healthy, Have Fun and Be Happy. fight co-morbidities.