SCHENECTADY — Schenectady police were continuing to investigate a fatal shooting that occurred the night before near the intersection of Davis Terrace and Third Avenue in the Mont Pleasant neighborhood.

Meanwhile, multiple neighbors on Thursday described being jolted to attention as the gunshots rang out, piercing the silence on what they described as an otherwise quiet night.

Police received a call regarding shots fired and a vehicle that crashed into a house at 1604 Third Ave. shortly before 8:30 p.m. Wednesday.

When police arrived on scene, they discovered a 38-year-old man in the vehicle with multiple gunshot wounds. The individual was treated by paramedics from the Schenectady Fire Department and pronounced dead at the scene a short time later.

It is the city’s first homicide this year.

Destiny Garcia recalled Thursday she was in her room eating dinner when she heard six or seven gunshots and ran to her window to investigate as shots were still being fired.

“They were shooting right outside my house,” she said. 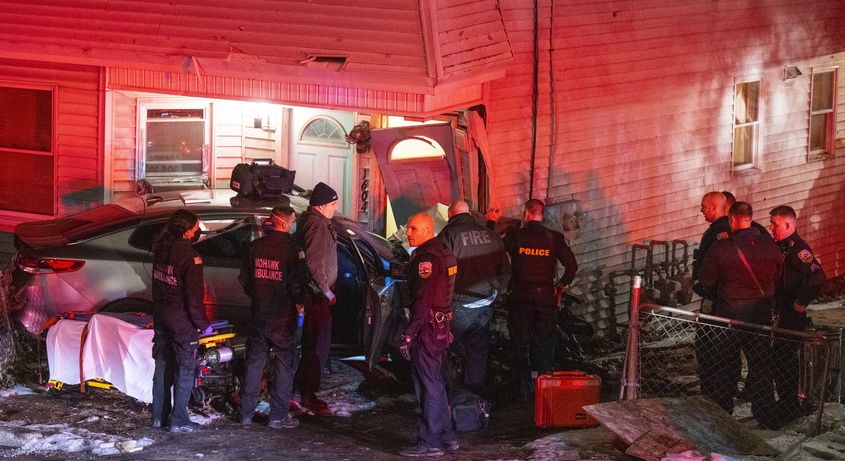 She described seeing a silver vehicle that was parked behind her car on Davis Terrace speed off in the direction of Third Avenue, with another car in close pursuit.

She said she couldn’t tell which direction the bullets were coming from and didn’t recognize either vehicle. She added the street is normally quiet, and was unaware of any other incidents in the three years she’s lived in the neighborhood.

“Nothing like this has ever happened here,” Garcia said. “I was really spooked.”

Others who live near the scene described being panic stricken and reaching for their phones to check on neighbors and loved ones.

“We take care of each other,” said Shawn Garrow, who described hearing multiple shots and two vehicles speeding off while he was watching television at a neighbor’s house.

Garrow said he called 911 and then reached out to his son-in-law, who had just left about 10 or 15 minutes earlier, to see if he was OK. He added that his step-son, who was at his home next door, called in a panic trying to locate him.

“He said ‘where are you? I heard something,’” Garrow said. “I told him I was next door and that everything was OK.”

Meanwhile, Barabara Forgette, who lives at 1604 Third Ave., the home the car crashed into, was trying to figure out her next steps.

She said her vehicle was totaled after the car crashed into it before plowing into the house, adding her insurance wouldn’t cover the damages since she didn’t carry collision insurance.

Forgette, along with two other families living in the three-floor home, were waiting for city Code Enforcement to inspect the building and determine if it was still safe to live in.

She described hearing the crash, which she initially thought was a noise caused by one of her upstairs neighbors dropping something.

“I happened to look out the window and there’s the car,” said Forgette, who has lived at the residence for nearly 12 years.

She’s planning to stay at a friend’s house if she has to evacuate the property, but is unsure what she will do about her two dogs and is hoping the city will allow the dogs to stay at the residence.

“I got to be in and out of this house,” Forgette said. “As long as they say it’s not going to fall down.”

The Schenectady Police Department is investigating the incident with the assistance from the New York State Police Major Crimes Bureau.

Anyone with information regarding the incident is asked to contact the Schenectady Police Department’s TIPS Line at 518-788-6566.