ALBANY — An Amsterdam physician who refused to wear a mask in a Wilton butcher shop is suing the shop’s manager for refusing to sell him a steak unless he masked up.

The federal lawsuit centers on a brief interaction at Primal Your Local Butcher on Dec. 17, five days after Gov. Kathy Hochul’s order (since canceled) that New York businesses must require all customers age 2 and older to wear a mask inside or verify that everyone age 12 or older is fully vaccinated against COVID-19 before entering.

Dr. David Kwiat is an ophthalmologist who lives in Saratoga County and practices in the town of Amsterdam. He’s representing himself in the filing, which seeks at least $250,000 in damages from store manager Jason Houle for shame, stress, embarrassment and loss of appetite resulting from what he alleges is discrimination and civil rights violation.

Primal owner Kevin Wickert told The Daily Gazette he will pay to defend Houle against the lawsuit and branded it “outrageous.”

Kwiat indicated the case is about establishing that the mask rule is unconstitutional, more than it is about money.

Both Kwiat and Houle said their brief interaction a week before Christmas was polite.

The complaint Kwiat filed in federal court in Albany stretches 39 pages, a good chunk of it spent laying the groundwork for his claims by attempting to establish that the pandemic blamed for the death of 933,000 Americans is a hoax and that some of the steps taken to combat it are bogus.

Many of his arguments will sound familiar to those who brand the pandemic a scamdemic and oppose efforts toward a population-based response such as public masking or mass vaccination. They include: 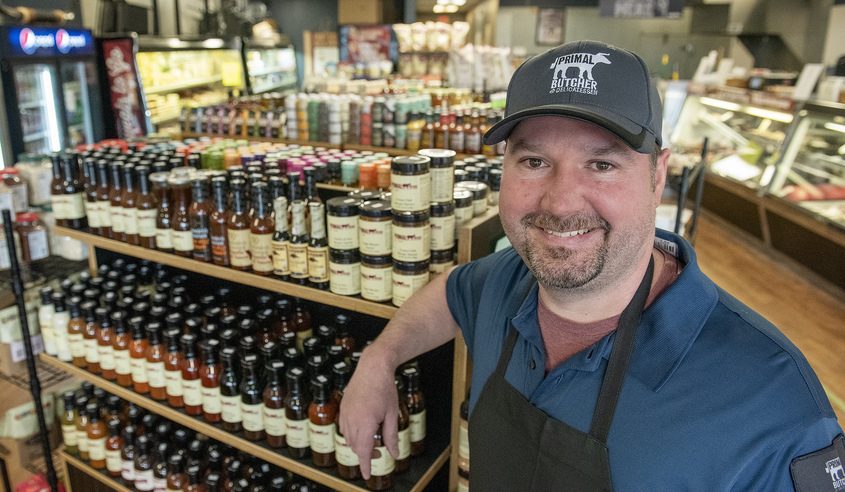 Early predictions of mortality were too high, the death toll is artificially inflated, there are no accurate COVID tests, vaccines have no demonstrated efficacy or safety, natural immunity is stronger, more people die annually of the flu with little notice, masks don’t prevent spread of airborne germs, masks cause carbon dioxide buildup that can harm those who wear them, masks have caused children to die of oxygen deprivation, and so on.

The various allegations would, if proved, constitute violations of various federal statutes or felony and misdemeanor offenses under New York state laws.

Wickert, owner of Primal, said Tuesday that he doesn’t know what his next step is.

“I have a business insurance policy,” he said. “I’m waiting to see if they accept this or reject this as a claim.”

Wickert said he has spoken informally to friends in the legal field who’ve said the lawsuit won’t fly, particularly in federal court. If he has to retain an attorney, the first step would likely be a Rule 11 letter seeking costs and damages if Kwiat doesn’t drop the case immediately.

Wickert said he’s been sued four times for exaggerated claims in his 21 years as a business owner.

“Those were ridiculous, and they look like Brown vs. Board of Education compared to this one,” he said, referencing the landmark civil rights case in the early 1950s.

“It just seems so outrageous — we sell pork chops. We’re not conspiring with the state. We don’t have a beef with anybody.”

Wickert said his two Primal locations, in Wilton and Guilderland, were open every day through the pandemic and have a multilevel approach to masking rules when the state issues them: The customer can walk in wearing a mask; walk in maskless and don a free mask provided by the staff; phone in an order and sit maskless (or masked) in the parking lot while the staff carries it out to their car; or have Primal make a delivery to their home, where they can set their own mask policy.

Houle said he offered Kwiat the first three options but Kwiat declined. His sense is that Kwiat wanted to be denied service.

(Kwiat says Houle didn’t offer the parking lot carryout, but he would have rejected the offer if Houle had.)

“From the vibe I got as he was leaving,” Houle said, “he was looking forward to having this transpire. He was overconfident in terms of how he left.”

Houle said he gave Kwiat his business card when Kwiat asked his name. Kwiat said “See you in court” as he walked out, then he took a photo of the window sign announcing Primal was complying with the state’s Dec. 13 mask mandate, Houle recalled.

Houle said he had to do a lot of coaching of his staff so they could soothe rather than exacerbate already-frayed tempers during the last two years, and it has been a stressful time.

But there was only one other customer who made a stand on the mask mandate issued in December, he said.

“For the most part everyone goes with the flow,” Houle said.

Asked if he would obey a mask mandate passed by the New York state Legislature and signed into law by the governor, Kwiat told The Gazette on Wednesday he would not, because such a law would be unconstitutional.

“You cannot legally restrict someone’s breathing. You can’t do it. It’s criminal,” he said.

Asked if he wears a mask when performing surgery — which is not mandated by state law but is an accepted best practice in the medical field and a requirement of some regulatory agencies — Kwiat said he does, and suffers headaches as a result.

He expressed reservations about speaking to a reporter, saying the mainstream media has a tendency to only report the official and widely held points of view.

Groupthink is not correct just because the majority of people subscribe to it, Kwiat said. Just look at Nazi Germany, he added: The prevailing point of view there was not right.

Asked about the logical extension of this — comparing being forced to cover his mouth and nose in a meat market to being forced to breathe Zyklon B in a concentration camp gas chamber — Kwiat cut the interview off, saying the reporter was distorting the point he was making.

He brought an interview with WNYT on Wednesday to a similarly abrupt ending.

He should have Kwiat while he was ahead. After reading this , I believe this could be the most frivolous lawsuit ever filed. A doctor “unable to feed his family”? Has the doctor ever seen a sign at a store that says, No shirt , no shoes no service? Well the same applies here regarding the shop to choose serving customers who are masked.

I have been vegetarian lately but I think I am going to order a bunch of steaks from this store.

Dr Kwiat deserves a black eye and then steak to put on it to cure the pain!

Gee, I don’t know….I DO hope my doctor DOES follow mainstream, official medical guidelines in treating me, and I DO hope the media WILL report on those PROVEN and APPROVED courses of treatment, and yes, I thank the mainstream media for filtering out crackpot theories promulgated by sensation seeking “influencers” and charlatans seeking to create controversy and line their own pockets. Thank you, Gazette!