NISKAYUNA — Yom HaShoah, Holocaust Remembrance Day, was marked Thursday with a ceremony on the site of a memorial to be built along Route 7 and with the admonition that remembering isn’t enough.

The memory of the 6 million Jews killed by Nazi Germany 80 years ago must not only be preserved but should drive people to fight hatred and bigotry in the present day, speakers said.

“‘Never again’ is not slogan but a call to arms, a call for peace and tolerance, a call to stand up against prejudice, hatred, bigotry and the scourge of anti-Semitism around the world,” he said.

Rabbi Rafi Spitzer of the nearby Congregation Agudat Achim said the day is one of communal mourning but said the site on which the ceremony was held offers a way to a better future.

“In Yom HaShoah, we are confronted with the story of the lack of possibility, of the end of hope, of the worst possible depredations that humankind can do to other human beings,” he said. “But here, off of Route 7 on this hallowed land, we have only possibility.” 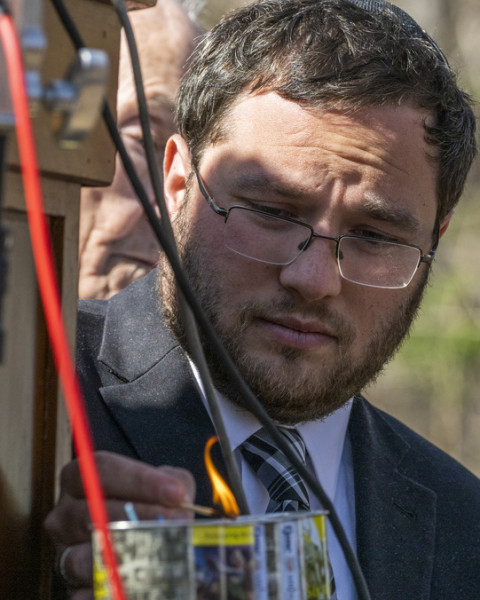 The land on which the memorial will be built was donated by the Roman Catholic Diocese of Albany, which owns the adjacent Most Holy Redeemer Cemetery.

Albany Bishop Edward Scharfenberger also spoke on the theme of remembrance being not just about the memories of past horror but prevention of future wrongs.

“We are forced to bear witness, we cannot be silent, we must tell this story, particularly to our young people, to our children,” he said. “We hear, horrifyingly, how many people are unaware of what happened. The shoah that we are commemorating today is part of a pattern that has occurred throughout the course of history, in which there has been hatred and prejudice, particularly against the Jewish people.

The memorial has been in the planning stages for years but there are still only trees on the site.

After the ceremony, Lozman said it will be built, just not as soon as originally hoped.

“We have come quite far,” he said, and all regulatory approvals are in place.

“We’re literally ready to put the shovels in the ground and once we get the finances, we’re going to do it.”

The pandemic has slowed the process of fundraising for the memorial just like it has hindered many other 501(c)(3) organizations that rely on philanthropy, Lozman said. It has also limited the face-to-face meetings and education that the organization relies on to spread its message and build support.

“COVID is on its way out, hopefully, and we will be using a development director for that purpose,” Lozman said. “We will succeed, it’s a matter of time and effort.”

Lozman emphasizes that the genocide inflicted upon the Jews is not just a loss for the Jewish people but for all of humankind: We’ll never know what those 6 million people, a quarter of whom were only children, might have done to make the world a better place.

Likewise, the hate with which the Holocaust was conceived and inflicted on the Jews hurts everyone else to a degree.

“What we have is something that’s of value to everyone, not just Jews,” Lozman said of the memorial. “We all have been victimized by hatred or prejudice.”

Among the other speakers Thursday was Sydney Berger, a Union College student who read “A Prayer for Yom HaShoah” by the late Rabbi Jonathan Sacks:

“Today, on Yom HaShoah, we remember the victims of the greatest crime of man against man — the young, the old, the innocent, the million and a half children, starved, shot, given lethal injections, gassed, burned and turned to ash, because they were deemed guilty of the crime of being different.

“We remember and pay tribute to the survivors, who bore witness to what happened, and to the victims, so that robbed of their lives, they would not be robbed also of their deaths.

“We remember and give thanks for the righteous of the nations who saved lives, often at risk of their own, teaching us how in the darkest night we can light a candle of hope.

“Today, on Yom HaShoah, we call on You, Almighty God, to help us hear Your voice that says in every generation:

“Do not stand idly by the blood of your neighbor.

“Do not oppress the stranger.

“We know that whilst we do not have the ability to change the past, we can change the future.

“We know that whilst we cannot bring the dead back to life, we can ensure their memories live on and that their deaths were not in vain.

“And so, on this Yom HaShoah, we commit ourselves to one simple act: Yizkor, Remember.

“May the souls of the victims be bound in the bond of everlasting life. Amen.”

More: All News | Everything Niskayuna