LOUDONVILLE — It wasn’t Siena’s best game Friday, and maybe the best wasn’t needed, but the Saints needed a little something more.

Second-seeded Siena (10-8) erased one deficit, but couldn’t do it a second time and lost to third-seeded Fairfield 10-8 in a Metro Atlantic Athletic Conference women’s lacrosse semifinal at Hickey Field.

It was the third consecutive season Fairfield has ended the Saints’ season, with the other two coming in conference championships in 2019 and 2021. The 2020 season was halted in mid-March because of the coronavirus pandemic.

“I just don’t think we executed, unfortunately,” Siena coach Abigail Rehfuss said. “It’s heartbreaking for our players, who I know are capable of better games than what we put out there today.” 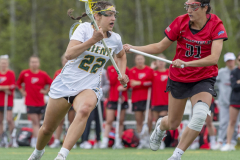 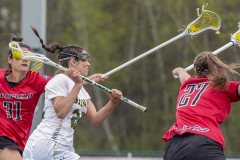 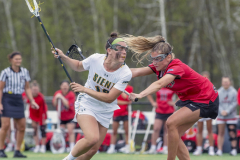 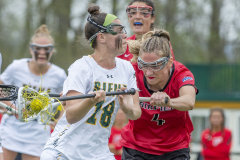 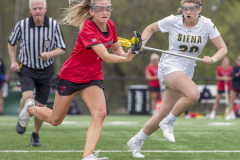 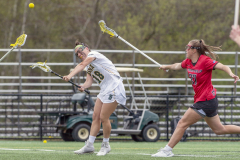 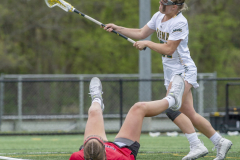 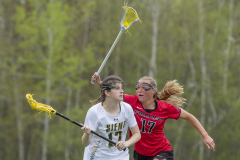 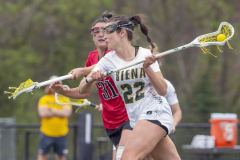 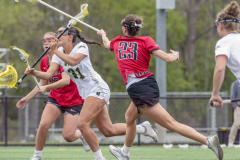 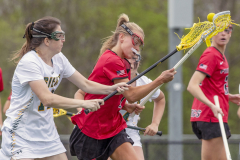 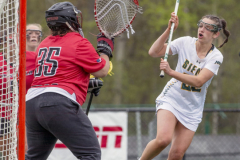 Siena’s Mary Soures readies to take a shot at Fairfield’s goalie Olivia Conquest ERICA MILLER/THE DAILY GAZETTE
Fairfield got out to a 2-0 lead in the first quarter before Amanda Nieman got Siena on the scoreboard. The Saints hurt themselves that quarter with five turnovers, largely on passes into traffic.

Fairfield (12-6) increased it to 3-1 on an extra-woman goal early in the second, but Siena came back to tie it on free position goals by Nicole McNeely and Rebecca Gilhooley.

McNeely scored the second of her team-high three goals to give the Saints a 4-3 lead, but the Stags answered 46 seconds later and there was no more scoring in the half.

Again, Siena took a lead, 5-4, when McNeely avoided a double-team and spotted Haylee Kuprianchik, who tallied.

But Fairfield then found its stride by going on a 4-0 run, with Kelly Horning notching two of her game-high four goals. Katy Wangsness’ extra-woman goal with 59 seconds left in the third closed the gap to 8-6.

“Second quarter, we started to flip the script a little bit, catch a rhythm, and then third quarter, Fairfield put up three and now we’re climbing out of a hole again,” Rehfuss said.

The first half of the fourth quarter was marked by good goalie play from Fairfield’s Olivia Conquest and Siena’s Ally Mervine, who was particularly sharp in the first half and finished with 11 saves.

“I thought she had an outstanding game today,” Rehfuss said of Mervine. “Our plan lately has been to split goalies: Merv first half, Sabrina [Krasner] second half. I thought Merv stood on her head in the first half, and really, at the end of the first half, we hung her out to dry and she made a huge save going into halftime. Like, yeah, you’re staying. Then she came back out, answered the call, did everything and more we expected her to do.”

After Fairfield made it 9-6, Siena scored twice, from McNeely and Mary Soures, to make it 9-8 with 4:34 left. However, Amanda Kozak’s unassisted goal with 2:30 left turned out to be the back-breaker for the Saints, as they committed two turnovers following that and fell short.

Fairfield had an especially strong day on goals from cutters, who scored seven of its 10 goals.

“We prepared for it; miscommunications, everybody giving their best effort. That’s why people run cutters, it causes chaos, so Fairfield did a nice job of feeding the open cutter and finishing,” Rehfuss said.

Rehfuss said the Saints also prepared for Fairfield trying to shut down McNeely, Siena’s all-time leader in career points, goals and assists, but the Stags did a strong job holding Soures — who had 60 goals entering Friday — to just the one goal.

Rehfuss said the team won’t be measured by the loss.

“I don’t want this loss to overshadow all the good work this team has done, and that Mary and Nicole have led this program to,” Rehfuss said. “It hurts right now, but there’s so much to be proud of. Today just wasn’t our best day.”