Trainer Steve Asmussen applauded what he called “so rare in this day and age,” a champion racehorse with potential value as a stallion coming back for another year of racing.

Even rarer — as in, never been done before — is a horse sweeping the Amsterdam and Allen Jerkens as a 3-year-old, then coming back to sweep Saratoga Race Course’s two Grade I sprint stakes on dirt, the Alfred G. Vanderbilt and Forego.

But the upset this summer would be if Jackie’s Warrior failed to accomplish that, based on his record at Saratoga, and everywhere else, for that matter.

“Improbable” would be a generous way to describe Robin Sparkles’ route to the winner’s circle for a graded stakes race at Saratoga Race Course.

Her dam, My Sparky, was modestly successful, winning five races from 17 starts and earning $147,000. In 2014, My Sparky was sold at the Fasig-Tipton Saratoga fall mixed sale, a sale that, while useful, carries none of the prestige of the company’s August yearling sales. Her sale price was $5,700.

My Sparky’s first two foals didn’t bring a lot of money at auction, and they didn’t do much on the racetrack, either. In 2016, she was supposed to be bred to Girolamo, but two cover attempts failed, and she ended up being bred to Elusive Quality—a stallion upgrade for sure, but one that happened wholly by accident.

“Chatting at the track with … NYRA analyst Maggie Wolfendale,” by Will Springstead with photos from Erica Miller

Maggie Wolfendale is a third-generation – “on both sides” – horsewoman who says she basically grew up in barn 18 at Laurel Park in Maryland. She currently serves as a racing analyst for the New York Racing Association, for whom she has worked since 2010, and is a fixture at Saratoga Race Course throughout the summer.

In that time, her role has grown, as she quickly became known for her astute paddock analysis. These days, you can find her hosting shows, doing post-race interviews — some on horseback — or pretty much anything she is asked to, since she’s that versatile.

Her versatility comes from putting the hours in, quite impressive given that she is married to a fellow trainer – that’s right, she has her trainer’s license – Tom Morley and is a mother of two young daughters, Willow and Grace. She also is involved with horses’ aftercare as a member of the board of directors for Thoroughbred Retirement Foundation.

“Belmont fall meet to be run at Aqueduct due to construction,” by Mike MacAdam

The 2022 Belmont Park fall meet will be conducted at Aqueduct Racetrack while construction begins on tunnels that will provide vehicle and pedestrian access to the Belmont infield, part of a major capital improvement project designed to modernize Belmont.

“‘It all worked out’ for Kimari in Honorable Miss win at Saratoga Race Course,” by Adam Shinder with photos from Erica Miller

Kimari’s third stakes outing of 2022 finally gave trainer Wesley Ward the set-up and outcome he was looking for.

In the Grade I Madison on April 9 at Keeneland, Kimari ran a bit too close to the pace and didn’t have her typical closing kick.

Four weeks later in the Grade I Derby City Distaff at Churchill Downs, Ward said it was a bit too quick of a turnaround on a track Kimari didn’t particularly favor.

But in Wednesday’s Grade II, $200,000 Honorable Miss at Saratoga Race Course, everything set up just right, and Kimari delivered, topping a four-horse field with an outside drive down the stretch under jockey Joel Rosario to get by Frank’s Rockette for a half-length win in 1 minute, 10.78 seconds.

“In Shuvee Stakes, Clairiere makes it two straight over Malathaat,” by Mike MacAdam with photos from Erica Miller

It took a year, but Clairiere has caught up to Malathaat in size.

It took 1:39.32, and Malathaat couldn’t catch up to Clairiere in the Grade II Shuvee at Saratoga Race Course on Sunday.

The two 4-year-old fillies, both daughters of two-time Horse of the Year Curlin, raced against each other for the sixth time, and for the second time in a row, Clairiere was better, using a move on the rail under Joel Rosario coming off the second turn to win by a length and a half over Malathaat. 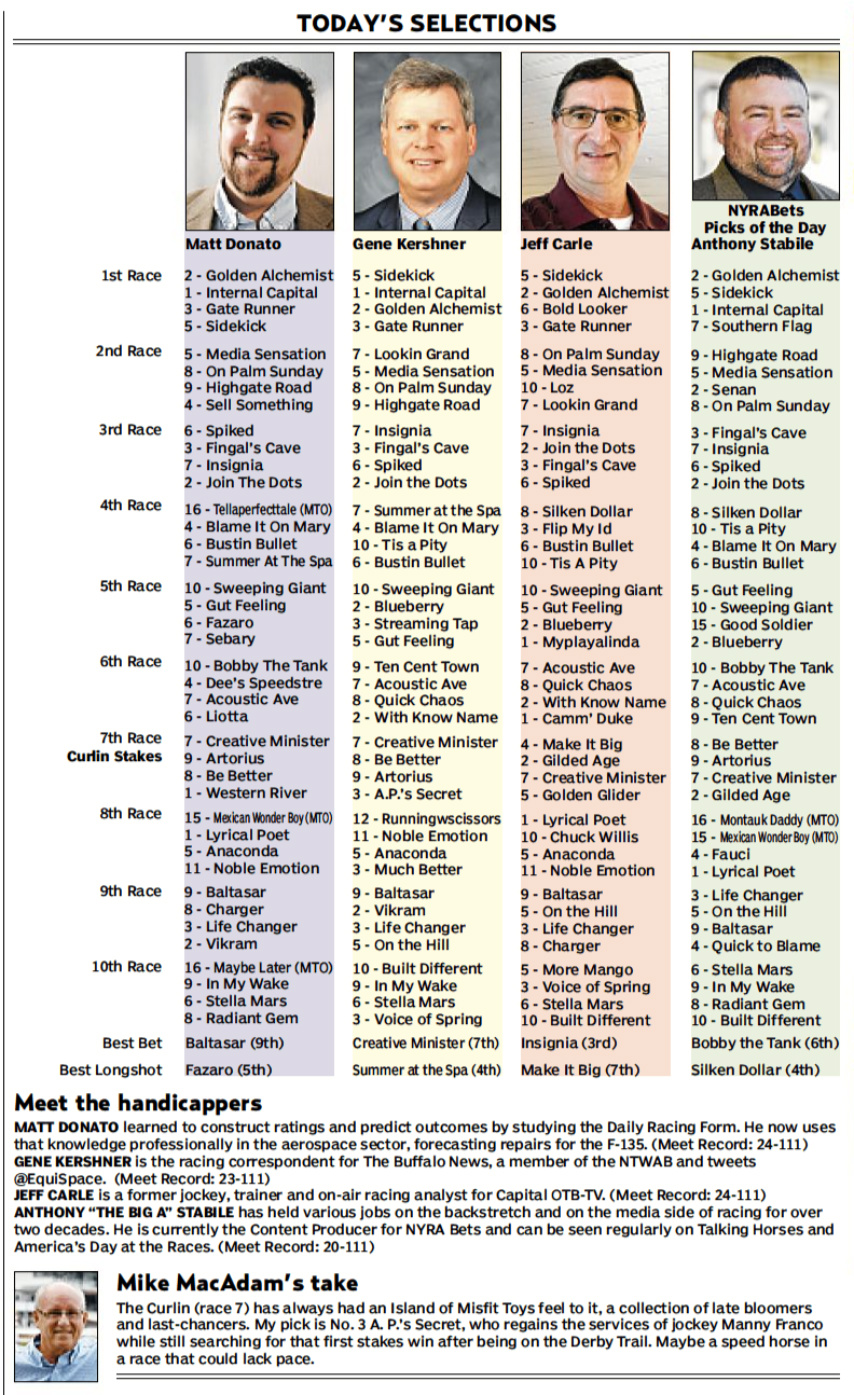