“Rockemperor gets the jump on Arklow to win Bowling Green,” by Mike MacAdam with photos from Erica Miller

Trainer Brad Cox had one for his horse, Arklow, also.

And the way Arklow was flying at the end, he might’ve won this race, but jockey Irad Ortiz, Jr., accepted some culpability for his judgment coming off the last of three turns, when Arklow was boxed in by Rockemperor and had to wait just long enough to get outside for running room that he fell a half-length short at the wire.

“Gunite returns to familiar Spa winner’s circle by taking the Amsterdam,” by Mike MacAdam with photos from Erica Miller

Is there an echo in here?

For the second day in a row, a former Hopeful winner trained by Steve Asmussen won a graded stakes at Saratoga Race Course.

“Epicenter gets back to the winner’s circle, in the Jim Dandy,” by Mike MacAdam with photos from Erica Miller

There were two different definitions of the word “relieved” for trainer Steve Asmussen on Saturday.

There was pressure on Jackie’s Warrior to set a Saratoga Race Course historical precedent in the Alfred G. Vanderbilt in the eighth-race stakes. He did that, with an easy win.

Then in the ninth race, the Grade II Jim Dandy, relief came in a different form.

Against three talented rivals, Asmussen’s hard-luck colt, Epicenter, faced the prospect of heading back to the barn without a pit stop and photo in the winner’s circle, again.

How many people can exclaim “Immortality, baby!” at Saratoga Race Course and not sound like a blowhard bettor with an inflated opinion of the chalky dime superfecta they just hit?

Steve Asmussen pulled it off on Saturday, and it didn’t sound absurd at all.

The Hall of Fame trainer has had his share of Saratoga moments, including becoming the all-time leader in career victories in North America at last year’s meet.

Jackie’s Warrior had been responsible for four such memorable moments for Asmussen and his barn, and made it five on Saturday when he won the Grade I Alfred G. Vanderbilt in such comfortably dominating fashion that veteran jockey Joel Rosario may have had the easiest assignment of his career.

With the win, Jackie’s Warrior became the first horse ever to win Grade I races in three consecutive seasons at Saratoga, where they’ve been racing since 1863.

“Artorius rolls in Curlin for Chad Brown with potential Travers start on the horizon,” by Adam Shinder

Artorius had the potential and the regal breeding but, much like his late sire, Arrogate, didn’t make his racing debut until April of his 3-year-old season.

And, much like his sire, a first trip over the Saratoga Race Course surface showed just how much that potential could pay off.

For Arrogate, that came in his record-setting victory in the 2016 Travers Stakes. For Artorius, it was a dominant 4 3/4-length victory in Friday’s $135,000 Curlin Stakes that came in just his third career start and should set the tone for trainer and Mechanicville native Chad Brown to send him into this year’s Travers.

“Improbable” would be a generous way to describe Robin Sparkles’ route to the winner’s circle for a graded stakes race at Saratoga Race Course.

Her dam, My Sparky, was modestly successful, winning five races from 17 starts and earning $147,000. In 2014, My Sparky was sold at the Fasig-Tipton Saratoga fall mixed sale, a sale that, while useful, carries none of the prestige of the company’s August yearling sales. Her sale price was $5,700.

My Sparky’s first two foals didn’t bring a lot of money at auction, and they didn’t do much on the racetrack, either. In 2016, she was supposed to be bred to Girolamo, but two cover attempts failed, and she ended up being bred to Elusive Quality—a stallion upgrade for sure, but one that happened wholly by accident.

“Chatting at the track with … NYRA analyst Maggie Wolfendale,” by Will Springstead with photos from Erica Miller

Maggie Wolfendale is a third-generation – “on both sides” – horsewoman who says she basically grew up in barn 18 at Laurel Park in Maryland. She currently serves as a racing analyst for the New York Racing Association, for whom she has worked since 2010, and is a fixture at Saratoga Race Course throughout the summer.

In that time, her role has grown, as she quickly became known for her astute paddock analysis. These days, you can find her hosting shows, doing post-race interviews — some on horseback — or pretty much anything she is asked to, since she’s that versatile.

Her versatility comes from putting the hours in, quite impressive given that she is married to a fellow trainer – that’s right, she has her trainer’s license – Tom Morley and is a mother of two young daughters, Willow and Grace. She also is involved with horses’ aftercare as a member of the board of directors for Thoroughbred Retirement Foundation. 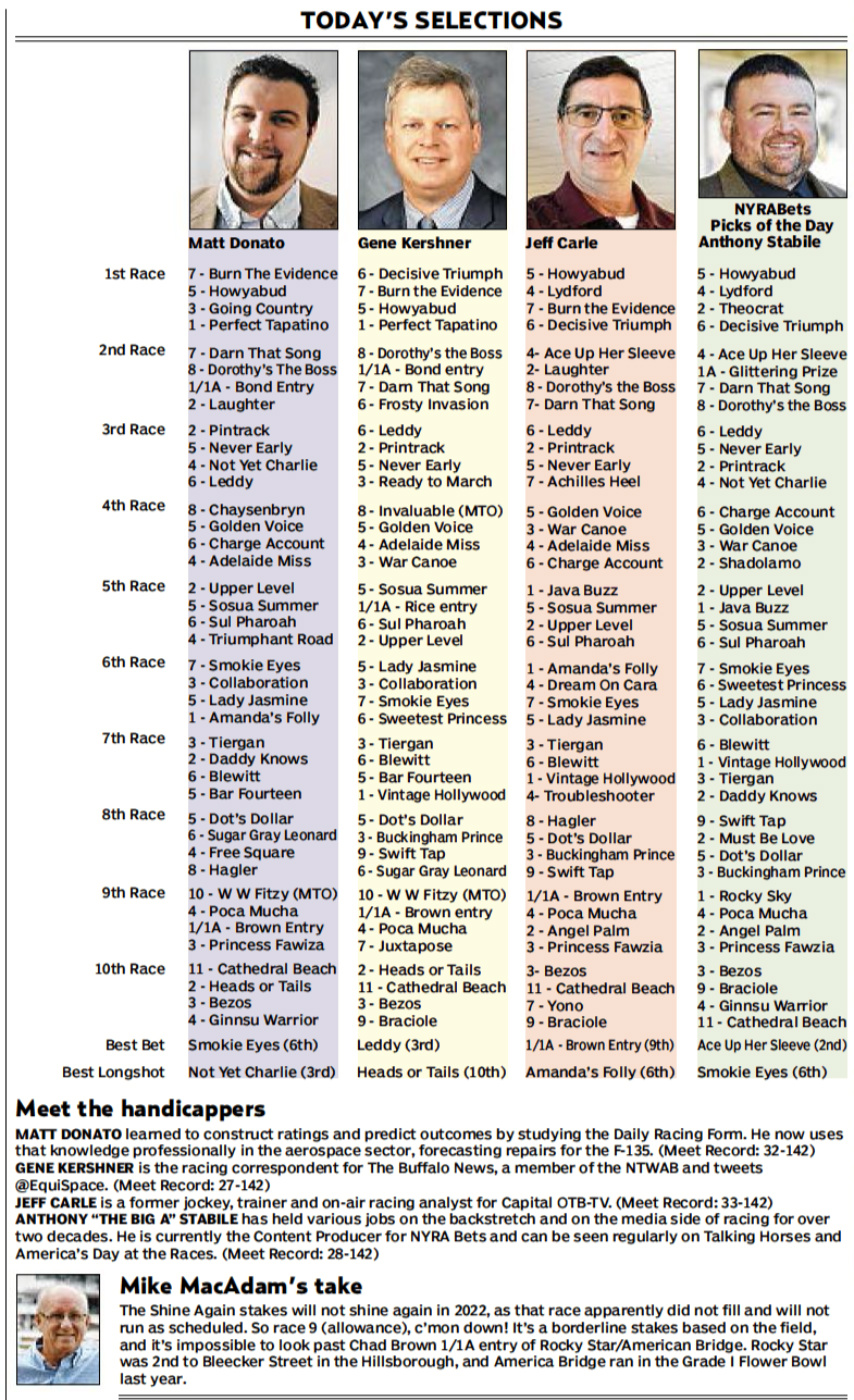