SARATOGA SPRINGS – A county court judge this week denied an appeal by the Saratoga County district attorney that could have reversed the dismissal of charges against a prominent local Black Lives Matter and social justice activist.

Fulton County Court Judge Chad Brown’s ruling upheld a Saratoga Springs City Court judge’s January determination that prosecution or conviction of Jamaica Miles for charges stemming from a July 14, 2021, protest in Saratoga Springs “would result in an injustice,” according to the decision paperwork.

Miles said she felt targeted by the charges.

“They, [the District Attorney’s Office, the police and some elected officials] did not agree with my speech and my ideas about racism and police brutality in Saratoga, so they set out to do something about it,” Miles said in a release sent by the group All of Us. “And because there is no legal standing to arrest me for hurting their feelings, we found ourselves in a court case that was ultimately dismissed.”

District Attorney Karen Heggen defended the charges and the appeal to reinstate them, arguing Thursday that Vero’s original decision acknowledged Miles’ disorderly conduct and the seriousness of impeding traffic.

“My whole appeal was based on the fact that I contended that the court abused its discretion in dismissing the case in the interest of justice,” Heggen said.

The disorderly conduct and second-degree unlawful imprisonment charges against Miles alleged that she helped obstruct traffic on Broadway “for several minutes” and restricted a driver’s movement by placing herself in front of the vehicle on July 14, 2021.

Brown’s ruling upheld Vero’s earlier decision to dismiss the charges. Vero determined that even though blocking traffic is a serious matter, there was no proof that the driver of the blocked vehicle was harmed. In addition, Vero determined even though Miles’ actions during the protest likely constituted disorderly conduct, Miles’ strong character and record of volunteer service “weighed heavily in favor of dismissal,” according to Brown’s ruling.

Miles, a 47-year-old mother of four, has no criminal record and is a member of the Schenectady City School District Board of Education.

Relying on video evidence, the City Court also determined that Miles’ loud and intense voice set her apart from other protesters. The judge wrote that video evidence showed Miles blocked the vehicle for three minutes, while other protestors stood in front of the car for nine minutes, according to court papers.

“The City Court was objective and adherent to statutory standards rather than emotional or specious in reaching its decision and conducted a sensitive balancing of both sides,” Brown’s decision reads. “[The] City Court carefully considered all the [applicable factors] and set forth its reasons supported by the record, which formed a basis for its exercise of discretion.”

“We’ve never contested [Miles’] good character, but I felt the court went too far in finding that all the criteria had been met given the unique facts and circumstances of her particular case,” Heggen said. 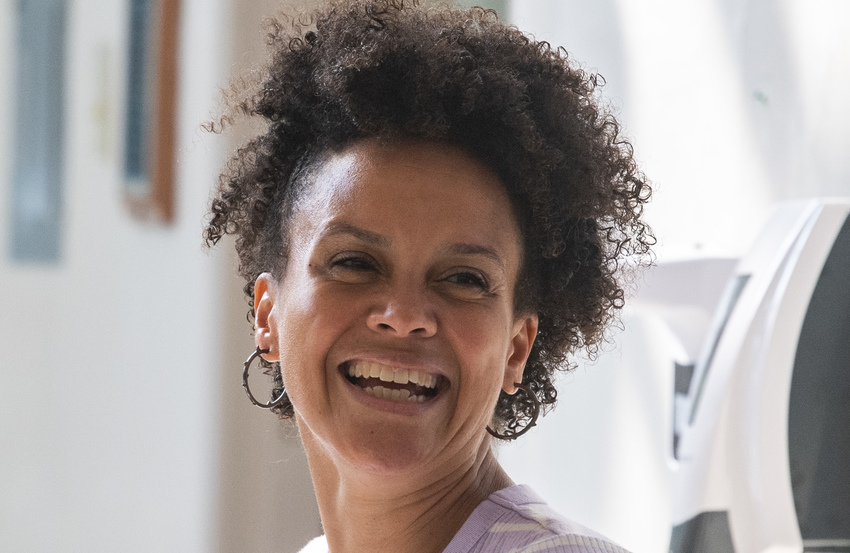 Schenectady school board member Jamaica Miles is pictured on July 7, 2021.

Monday’s appeal decision was just the latest legal outcome in favor of Black Lives Matter activists stemming from the July 2021 protest, which was a response to now retired Saratoga Springs Assistant Police Chief John Catone’s controversial June 2021 comments that suggested some people in the community were pushing a narrative that police were “racist killers.”

At one point during the June 2021 press conference, where Catone was joined by the city’s then Public Safety Commissioner Robin Dalton, Catone said he would “pull out every single connection my family has made over the last 130 years, and I will stop your narrative,” which was taken by many as a threat, The Daily Gazette reported at the time.

In April, the Saratoga County district attorney, a Republican, dropped a disorderly conduct charge against Saratoga Black Lives Matter leader Lexis Figuereo that had come from the same July 14, 2021, protest.

Figuereo said he and fellow Black Lives Matter leaders believe they have been targeted as a result of their activism. He said the stress of the court cases has been hard on his family – his sister, Chandler Hickenbottom, pleaded not guilty last week in Clifton Park Town Court to a fourth-degree criminal mischief charge that alleges she damaged a car during an April protest. That protest was in response to a video showing a Saratoga County sheriff’s deputy inside a Target store tackling an autistic 14-year-old Black teen.

“It’s about the trauma that we’ve been put through and that we have to put our family through,” Figuereo said. “The trauma of taking your time, having to take time off work and being away from your family. That’s the sentence.”

“Everyone I’ve spoken to in the Saratoga County legal community agreed – [Heggen] should not have appealed Judge Vero’s dismissal,” Phillips said. “She didn’t listen, and she wasted taxpayer resources appealing a violation.”

The case was not dismissed because you were “Not Guilty”, I’m curious why every time there is one of your protests property and vehicles are damaged. You are the supposed leader yet you are never guilty and the police are targeting you. All you are doing is looking to make a name for yourself because you see yourself as a modern-day MLK, I have news for you, you aren’t, what you are is a person tarnishing his name.

And right on cue, whenever a person of color is exonorated or empowered, the small-minded right whiners are front and center with their tone-deaf indignation. But they’re DEFINITELY not racist! Just ask them.