“Everybody chasing Life Is Good in Whitney,” by Mike MacAdam with photos from Erica Miller

It was a conclusion, or an observation. But it also came across like a warning, perhaps.

A scenario was proposed on Wednesday morning to trainer Todd Pletcher in which a horse might attempt to put pressure on Life Is Good around the first turn in Saturday’s 95th running of the Whitney at Saratoga Race Course.

Pletcher’s dry response amounted to, “Yeah, I would say that anybody who wants to go with Life Is Good early on is probably going to be compromised in the end.”

Her name didn’t appear in the 2012 Saratoga sales catalogue, but only because she didn’t have a name yet.

It has appeared on T-shirts hand-printed by fans. And according to one woman’s Twitter account, the name wound up on her baby’s birth certificate.

On Friday, it finally appeared on a plaque at the National Museum of Racing Hall of Fame.

The popular Tepin joined Beholder as the only inductees in the contemporary category as the Hall of Fame celebrated the Class of 2022 at Fasig-Tipton’s Humphrey S. Finney Pavilion.

Royal Ascot was a major disaster for Golden Pal.

Fortunately for him and jockey Irad Ortiz, they were able to avoid a minor one in the Grade III Troy at Saratoga Race Course, helped in part by a recent shift in training approach.

And the fact that Golden Pal is just really fast.

Leaving behind a last-place finish on the international stage in June, when Golden Pal missed the break and was essentially eased by Ortiz in the Group 1 King’s Stand, Golden Pal shook off an awkward start in the Troy and edged ahead of True Valour late, while also holding off a charge from long shot Thin White Duke, to win.

His name suggests short bursts of travel at high speed.

His resume suggests the opposite.

Hot Rod Charlie’s rollicking long-distance tour continues on Saturday with his first-ever appearance at Saratoga Race Course, in the $1 million Grade I Whitney.

“Chatting at the track with … David Aragona,” by Will Springstead with photos from Erica Miller

David Aragona is what one might call a numbers and rhythm guy.

As a dual major in computer science and music at New York University, Aragona found a way to work in both music – Carnegie Hall, specifically – and horse racing before settling on horse racing.

“I use very little of either one these days,” Aragona said, chuckling, about his two majors.

He currently works for the Daily Racing Form as a TimeformUS analyst, in which he basically analyzes races to suggest horses and things to watch to the public. He’s also the linemaker for the New York Racing Association tracks. 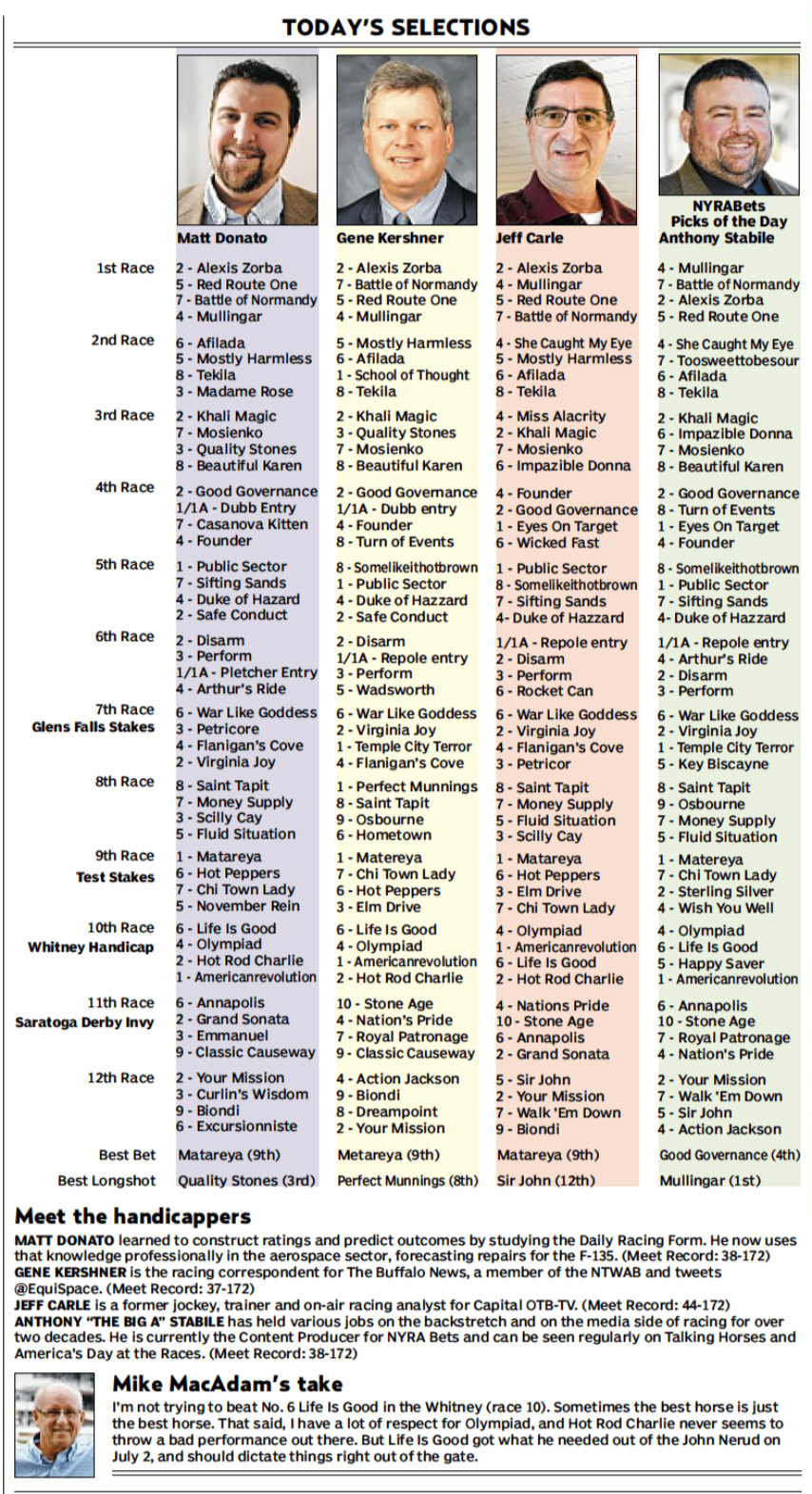