“Another dominating performance by Epicenter, this time in the Travers,” by Mike MacAdam with photos from Erica Miller

The Kentucky Derby was the one that got away.

Then the Preakness was the one that got away.

On Saturday, Epicenter was the one that got away.

“Champion sprinter Ce Ce gets spotlight of her own in Ballerina,” by Mike MacAdam

OK, this mile-and-a-sixteenth pitstop was fun while it lasted.

Ce Ce, the champion female sprinter in 2021, wound up at Oaklawn Park in Arkansas in March and won the Grade II Azeri at that distance.

Then she tried it again in the Grade I Apple Blossom in April, but finished third behind two distance stars, Letruska, the 2021 older dirt female champion, and Clairiere, the front-runner to win that Eclipse Award this year.

Back at her preferred distance in the Grade II Princess Rooney at Gulfstream Park on July 2, Ce Ce settled into her comfort zone and won by 6 1/2 lengths.

She’ll come right back to the short stuff as the 2-1 morning-line favorite against a pretty tough field in the Grade I Ballerina at Saratoga Race Course on Sunday.

One of the beauties of Saratoga Race Course is that, even though they’ve been racing here since 1863, you can still show up on any given day and see something you’ve never seen before.

Unfortunately for Jackie’s Warrior, his connections and his fans on Saturday, that meant seeing him get beat at Saratoga.

The 2021 champion male sprinter came into the Grade I Forego on the heels of a victory in the Grade I Alfred G. Vanderbilt that sealed his legacy as the only horse to have ever won Grade I races three years in a row at the Spa.

“Malathaat emerges triumphant in Personal Ensign,” by Teresa A. Genaro with photos from Erica Miller

Twice beaten by Clairiere this year, Malathaat emerged triumphant from the $600,000 Grade I Personal Ensign Stakes at Saratoga Race Course on Saturday.

Sent off at just under 2-1 odds as the favorite, Clairiere acted up in the starting gate and broke slowly, spotting the field nearly a dozen lengths. Though the four-year-old daughter of Curlin tends to come from well off the pace, and jockey Joel Rosario was able to coax her in the late stages of the race into contact with the other four horses, she was never a factor, finishing last.

“She jumped up a couple of times [in the gate], but she was OK,” said Rosario. “She took a long time today to find her stride. It was not her day, I guess.”

“Jack Christopher gets back to winning form in Allen Jerkens,” by Mike MacAdam with photos from Erica Miller

And he did it on Travers Day, even if it wasn’t in the Travers itself.

Cutting back in distance after having finished a respectable third in the mile-and-an-eighth Haskell Invitational last time out, the most accomplished 3-year-old colt in trainer Chad Brown’s barn added to his sparkling resume by winning the Grade I Allen Jerkens at Saratoga Race Course on Saturday.

Gufo defended his win in the Grade I, $750,000 Sword Dancer under red-hot jockey Joel Rosario on Saturday at Saratoga Race Course.

The 5-year-old horse sat seventh for the first mile and a quarter of the mile-and-a-half race, but, going six-wide entering the stretch, charged at the end to win by a half-length over Mira Mission.

The horse, trained by Christophe Clement, now has nine wins, three seconds and five thirds from 19 career starts, and $1,983,030 in earnings.

“So, just who was William Travers?” by Teresa A. Genaro

In 1867, the six-day summer meeting at Saratoga Race Course began on Aug. 7. The New York Times offered a glowing preview, praising the beauty of the women in attendance, the “unclouded brilliancy” of the sun, and the condition of the racing surface. That fourth season of racing in Saratoga, The Times claimed, “promises to be the most successful racing carnival ever held here.”

Those words must have been music to the ears of William R. Travers, whose eponymous race was carded as the first of two races (the second race comprised three two-mile heats). The president of the Saratoga Association, the organization that oversaw the track, Travers also served as a placing judge on that August day 155 years ago.

When Susan Garrett watches the 153rd Travers on Saturday, she’ll be zeroing in on one thing: Does the flower blanket look perfect?

Garrett, a florist and longtime Saratoga County resident, designs the intricate and hand-sewn floral pieces that adorn the winning horses at the Saratoga Race Course. Packed with hundreds of flowers, they’ve become track attractions in their own right over the last 28 years.

“I’m blessed to be able to make these pieces,” Garrett said.

“Ten years later, dead heat in Travers alive and well for those who were there,” by Mike MacAdam

One of the traditions at tradition-rich Saratoga Race Course is the canoe that has floated in the infield lake since at least 1926 and has been painted in the colors of the Travers winner’s silks since 1962.

“Glimpses of 2016 Travers winner Arrogate still out there, in horses like Artorius,” by Mike MacAdam with photos from Peter R. Barber

He was a lightning bolt across the Thoroughbred racing world.

Then he was gone.

“Saratoga Race Course spectators on why they make summer trips to the track,” story and photos by Stan Hudy

Thousands of people head to Saratoga Race Course throughout the summer, as horses run five days a week at the “summer place to be.”

Watching — and betting on — the races is a summer staple in the Capital Region, but the time between races and circumstances around venturing to the Spa City can be the most memorable part of the experience for many track-goers.

More than 780,00 fans have attended races this summer through last weekend, a figure that represents a 10% increase from last year at the same point. More than 44,500 people attended last year’s Travers Stakes day, and that number could grow higher Saturday for this year’s edition of the meet’s biggest race.

Throughout this summer, The Gazette asked fans at the historic race course why they made the trip to Saratoga Race Course.

And as of Thursday at Saratoga Race Course, after he rode the filly Precursory to her first career victory, Velazquez was handed a sign commemorating his 1,000th career victory at the Spa, a milestone he didn’t care about a few years ago, when his wife Leona brought it up.

“At the Track: Chatting with Javier Castellano,” by Mike MacAdam with photos from Erica Miller

Javier Castellano won’t be riding a horse in the Travers on Saturday, but if you want stories about winning Saratoga Race Course’s most important race, you come to him. 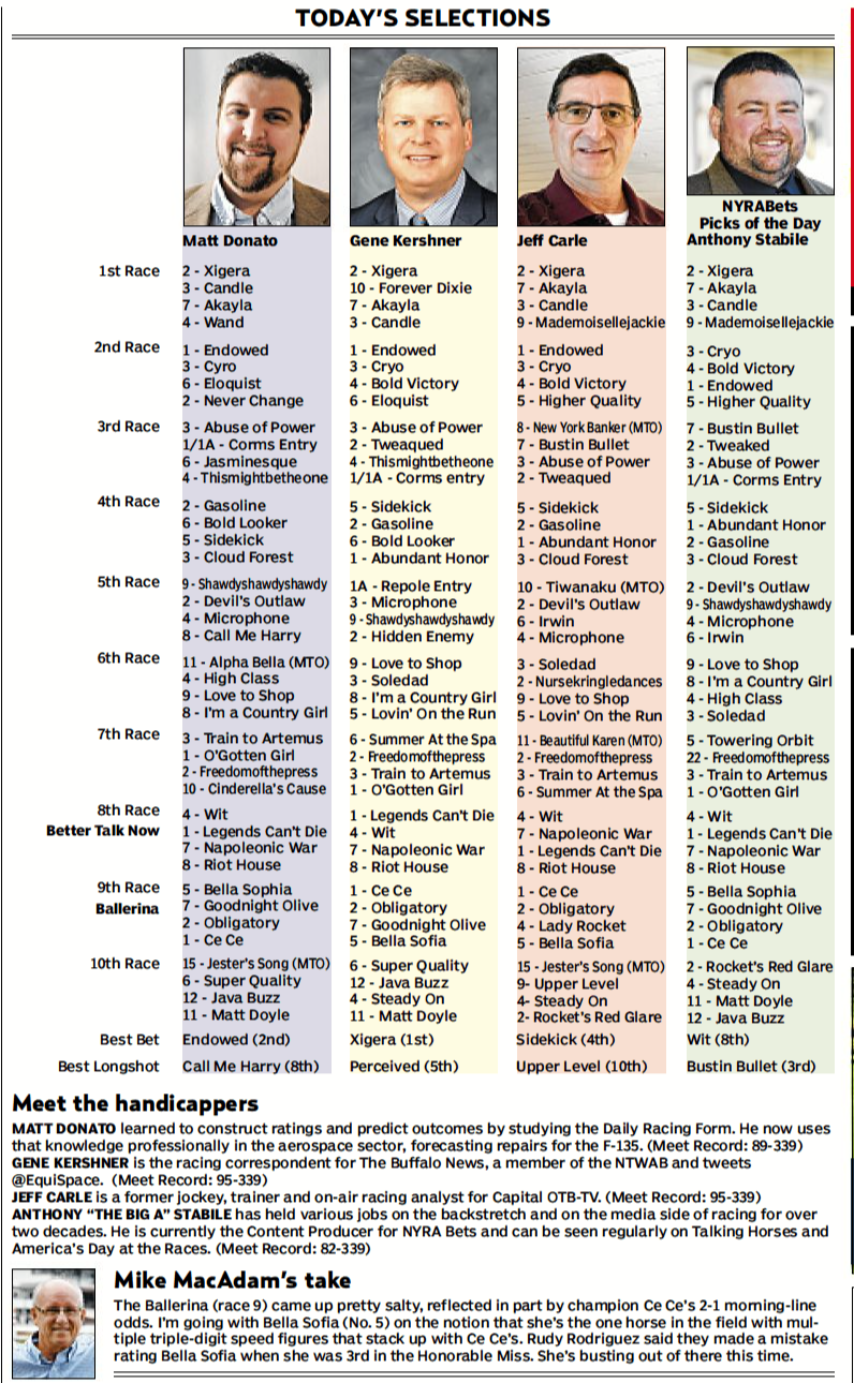