“Thoroughbred aftercare remains a crucial issue in racing industry,” by Teresa A. Genaro with photos from Erica Miller

Hibiscus Stables owned Frazil for 25 of his 70 lifetime races. He ran well for the partnership, winning five times and finishing in the top three in 12 starts, most of them claiming races, none of them more important than the race he ran on Nov. 30, 2016, finishing seventh at Aqueduct Racetrack.

“He came out of that race really good,” said Jon Taisey, Hibiscus’ executive vice-president for sales and client relations, standing with the bay gelding outside the National Museum of Racing on Saturday morning. “But he was just about to turn 11, and he was running pretty much in [low-level] claimers at that point. He was so good to us, and we saw the writing on the wall that he was tailing off. He probably was ready to go out and win another race. But we didn’t want to take the chance of someone claiming him and have him disappear. So we decided to retire him.”

One of the uncomfortable truths about horse racing is that equine welfare is determined by both financial and ethical considerations. It costs a lot of money to buy and support a racehorse, regardless of the level of racing, and it’s tempting for owners to try to recoup some of the money they’ve put into a horse, through either purse money or a claim. But sometimes — maybe even often — both finances and ethics point to retirement.

The ups and downs in horse racing can happen a month apart.

Olympiad was a dull fourth in the Grade I Whitney at Saratoga Race Course on Aug. 6, and trainer Bill Mott still wonders what went wrong that day. Running against Life Is Good didn’t help matters, but his horse’s 2022 campaign had been smooth sailing until then.

And one race after Mott had experienced a disappointing loss with perhaps the best turf female in the country, he was in the middle of the post-race interview again, but with Olympiad’s two-length victory in the Grade I Jockey Club Gold Cup to talk about this time.

“A look back at Affirmed Success,” by Mike MacAdam

The first time he raced, he broke slow, then made up his own mind to simply bull his way through the horses in front of him as jockey Jorge Chavez screamed at his fellow riders in warning: “Get out of the way, I ain’t got him!”

Toward the end of his career, five long years later, the horse needed some amount of urging from his jockey to get through the hole this time, “but he went all in. Man,” Richard Migliore marveled in recollection two weeks ago.

“And it turned out it was slightly premature, but it also secured my position, I was able to get through, and he kicked clear.

“The runaway filly and her guardian goat,” by Teresa A. Genaro with photos from Erica Miller

Based on her first start, 2-year-old filly Be Your Best has learned her racing lessons well. She made her debut at Saratoga Race Course on July 31, winning by 3 1/4 lengths under jockey José Ortiz for owner/breeder Mike Ryan and trainer Horacio De Paz.

She’s still got to work on her barn manners, though.

In De Paz’s barn in Clare Court, she’s one of the few, maybe the only, horse whose stall is guarded by a gate instead of webbing. De Paz says that she’s pretty friendly and rather kind, but she developed an unfortunate habit of escaping.

“At 81, Bill Parcells still flashes the old intensity, but as a racehorse owner,” by Mike MacAdam with photos from Erica Miller

The 2-year-old Thoroughbred – a baby, really, a rookie – won the first start of his career on Aug. 19 at Saratoga Race Course, and a member of the media asked the owner about the colt’s name.

The owner smiled a familiar smile, and there was also a telltale gruff needling to his voice, the kind of tone that would put an NFL rookie – or a reporter, for that matter – in his place back in the day. And quick. You’ve heard it before.

Then the owner walked out of the winner’s circle and signed autographs for a bunch of happy people who had been New York Giants fans for considerably less time. 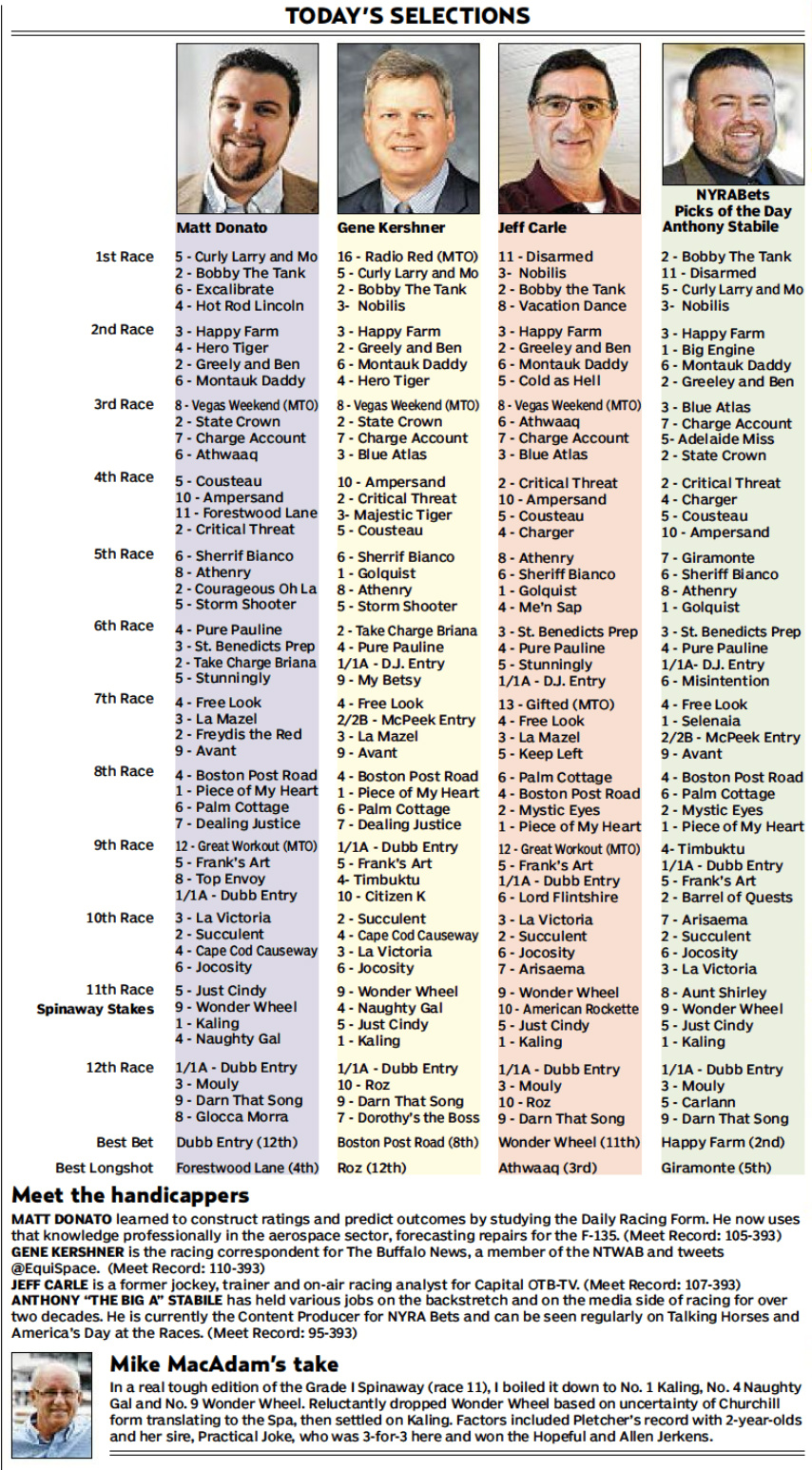