OPENING FACEOFF – Hockey officials, or officials in any sport, have a thankless job. They are expected to be perfect with their calls. They have to put up with players and coaches yelling and complaining about perceived missed calls.

I would say that 95% of the time, they get things right. But there are times when they get something wrong.

With 3:52 left in the second, Union forward Josh Nixon checked a Harvard player from behind and into the boards in the Harvard left-wing corner. Harvard defenseman Jack Bar retaliated by punching Nixon and knocking Nixon’s helmet off. 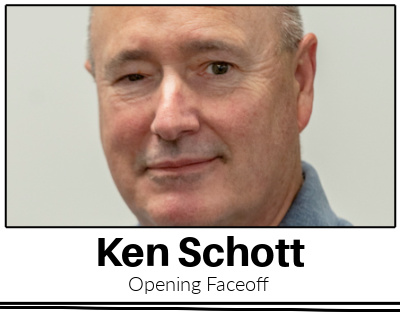 Referees Anthony Dapuzzo and Kevin Graber had a lot to sort out. They reviewed the video of the incident, and assessed each player a five-minute major and game misconduct. It was the correct call.

But here is where the refs made a mistake. They had the penalties put on the scoreboard, meaning the teams would be playing 4 on 4 for five minutes. I immediately said in the press box that they made an error because you don’t put coincidental five-minute majors on the board. I got looked at like I didn’t know what I was talking about.

After the game, I asked Union head coach Josh Hauge about that, and he was thinking along the same lines that I was. He said he would talk to the conference about it.

On Monday, Hauge got his answer.

“The league reached out to me and apologized,” Hauge said. “It was a mistake on the crew’s behalf.

“It was basically a rule misinterpretation. I thought overall, the reffing was fine in the game, it’s just that they made a mistake there. That’s something that’s going to happen in the game.”

I reached out to the league for a comment, and a spokesman wrote in an email that the league does not comment on officiating.

Harvard is a very talented team, and it showed it can be very dangerous 4 on 4. While Hauge accepted the apology, he didn’t blame the referees for losing the game.

“It does fall on us,” Hauge said. No matter what the situation is, we’ve got to handle it a little bit better. Even though it’s 4 on 4, we’ve got to defend better in those situations. So, [it’s a] good learning experience.”

Last Wednesday, the ECACH announced that it was making format changes to its postseason tournament.

The great news is that the women’s league will now have all 12 teams making the field, starting next season. The men have had that format since 2003.

Apparently, it’s not sitting well with three of the coaches I spoke with last weekend. Plus, a source with knowledge of the situation said the coaches voted 12-0 to keep the old format.

“I like our guys to have the ability to play as many games as possible, but I also think it shows how important the regular season is,” Hauge said. “You’ve got to try to fight to earn that bye. If not, then the five through eight [place teams] really have the advantage of playing one game at home. So it’s important that you do well in the regular season.”

“We talked about it in the summer,” Cashman said. “We would prefer to keep it as is. We like the best-of-three. I think it provides some really good excitement for the league. But obviously, the commissioner and administration went [in a different] direction.

Harvard coach Ted Donato has his team off to a 6-0 start in ECACH play, and it should get a first-round bye. But Donato isn’t crazy about the change.

“I’m not entirely sure all the reasoning behind it,” Donato said. But as coaches, I think we’re in pretty good agreement that we’d like to keep the format as it is, and we feel like for our student-athletes, it’s a great experience.”

“There’s a strong desire to have the same format, and the women are currently at eight,” Hagwell said. “So finances certainly come into play with that, with minimum guarantees, with travel reimbursement, you name it, with the receipts that are expected. Finances are part of that, but not solely.”

I’m not crazy about the change because it could bring chaos, especially if the 11th- or 12th-seeded teams win that first-round game. It doesn’t feel like they earned it. Winning a best-of-three is a better judge of what is the best in that particular series.

I look back at what 12th-seeded Colgate did in the 2010 tournament. The Raiders upset fifth-seeded RPI in three games in the first round, and then came back to the Capital Region the next weekend and stunned top-seeded Union in three games in the quarterfinals. Colgate earned that. There is too much left to chance in a one-game format.

I fully believe that if an 11th- or 12th-seeded team wins, the coaches are going to demand the format return to a best-of-three in the first round.

Here is the latest installment on my ECACH Power Rankings.

Former Union forward Collin Graf had a hat trick last Saturday, leading Quinnipiac to a 4-0 win over Yale. Graf leads the Bobcats in scoring with six goals and five assists.

For the second straight weekend, Yale failed to score. Besides the loss to Quinnipiac, the Bulldogs fell to Princeton 3-0 last Friday.

Yale hasn’t scored a goal in four straight games. The Bulldogs have just three goals on the season, all coming against Brown in their first two games of the season. Their scoreless streak is at 249:28. Connor Sullivan was the last player to score for Yale, getting a goal with 9:28 left in the third period of a 2-1 loss to Brown on Oct. 30.